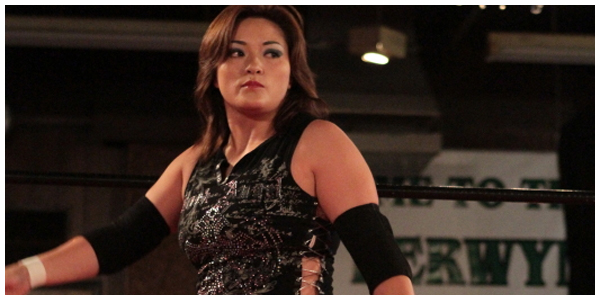 TNA Knockout, Hamada will be making her return to SHIMMER this September, the company announced today.

SHIMMER – WOMEN ATHLETES is proud to add Ayako Hamada to the announced list of wrestlers who will be a part of our Volumes 33-36 DVD tapings on September 11th & 12th at the Eagles Club in Berwyn, IL.

One of the very best female professional wrestlers in the world today, Ayako Hamada debuted with a bang on Volume 27 with a tremendous hard hitting bout against Mercedes Martinez. She then followed it up with a much talked about war against Sara Del Rey on Volume 28, which saw the battle spill all over the Eagles Club, in what has been called one of the wildest matches in SHIMMER history! Hamada continued her excellence on Volumes 31 and 32 in outings against both Daizee Haze and Cheerleader Melissa, cementing Ayako as one of the true MVP’s of the past year in SHIMMER competition. On September 11th & 12th, the amazingly talented Ayako Hamada will bring her exciting style of professional wrestling to the Eagles Club once again. Don’t miss your chance to be there live!

Tickets can be bought by clicking here.

Hamada makes her return to TNA television for the first time in several months this Thursday.