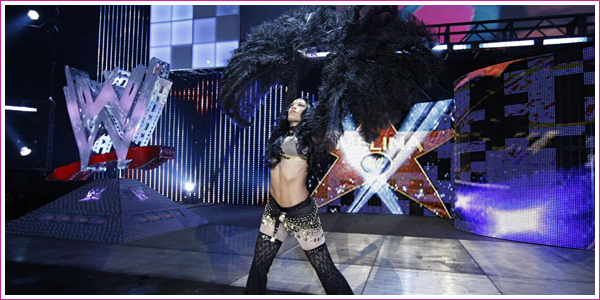 The words ‘Melina‘ and ‘Heat’ have reared their ugly head again… Reports have surfaced that there is some backstage heat on Women’s Champion, Melina following her Draft move from Raw to SmackDown. Apparently the A-List Diva has shown some ‘open distaste’ and if my understanding of ‘open’ in that phrase is correct, I’m guessing they’re referring to her public reaction to the drafting.

Now, I’m not sure if this another ‘online newz report’ or if there really is heat against Melina backstage, but I feel I should step up and side with her. It’s a shame when a woman’s emotional nature is taken as a sign of ‘open distaste’. Perhaps these reports refer to Melina’s emotional farewell with Kelly and Mickie following her match on the Draft show? Maybe these reports refer to her emotional farewell to the audience after her successful title defence on Raw this past week? Either way, it seems that people have taken this and turned it back on her and that’s such a shame.

Diva Dirt‘s own Erin can attest to the fact that Melina is a very emotional person and we have seen many a tear from the Women’s Champion on Raw in the past; for example when she was injured during last year’s Draft show, then there’s Mickie James’ near-injury last December on Raw.

I’m ready for this change. I believe the talent in Smackdown is great. There is definitely good opponents there. Some may be newer but when you want something and you are a fighter, sometimes it doesn’t matter how long you have been around.

Does that sound like the attitude of someone expressing ‘open distaste’? I think Melina handled her move really well, many Divas could consider the move a demotion (i.e. Maria last year), but for Melina to take her Women’s Championship with her to SmackDown, puts her at the top of that brand’s roster and keeps her in good standing.

After competing on the Raw brand for three years, surely she’s bound to – and entitled to be – upset? I just think people are taking a situation and twisting it. From what I’ve seen, Melina was sad to be leaving her friends behind on Raw and not upset because she’s leaving Raw itself.

Either way, I may be biased, but I’m on Melina’s side here. I just think it’s unfair to judge someone because they’re a little emotional and homegirl is a lot emotional.