How AJ Lee’s ‘Pipe Bombshell’ Will Play Into ‘Total Divas’ 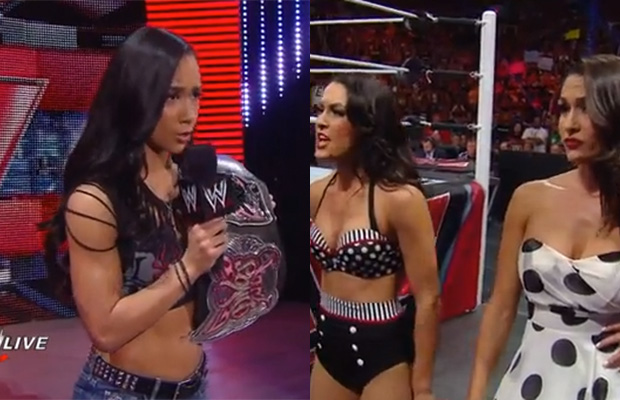 Divas Champion AJ Lee‘s “pipe bombshell” on Monday’s episode of Raw has gotten everyone talking this week and the segment promises exciting times ahead for the Divas division. But if the prospect of AJ versus the Total Divas cast isn’t promising enough already, sources close to the hit E! reality show confirm to us that AJ’s promo will be a focal point on the show, too.

For those who missed it, the pint-sized Divas Champ scolded the show’s leading ladies, Brie and Nikki Bella, Natalya, Cameron, Naomi, Eva Marie and JoJo, in a passionate segment that has been praised by everyone from the fans, to CM Punk, to Stephanie McMahon.

We’re told that one of the six recently ordered episodes of Total Divas — which will begin airing in November to complete the show’s first season — will center around Monday’s promo and a subsequent Divas Title match between AJ and one of the cast members, likely Natalya, at Night of Champions, which takes place next month.

The cast, we’re told, filmed their ‘real’ (remember, the show isn’t all real) reactions to the promo backstage at Monday’s Raw and to up the drama ante, at least one Divas may be seen ‘taking offense’ to AJ’s scathing — albeit, scripted — words.

Total Divas has already wrapped filming on in its initial eight-order run, which culminates in early September, but these scenes will be part of the new run of episodes in November.