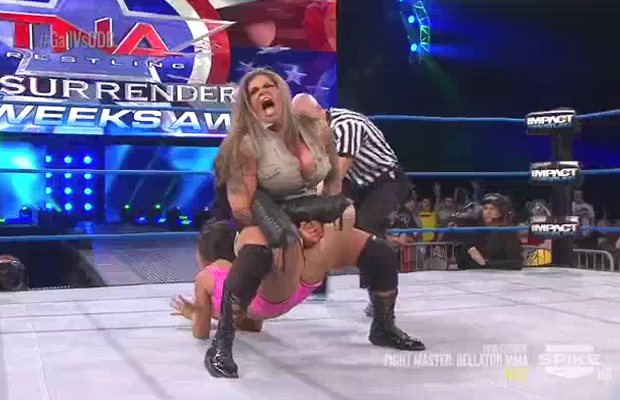 Hello, faithful Knockout followers! Welcome to this week’s Write-Up. Last night we saw ODB take on Gail Kim in a two out of three falls match to determine the number one contender to Mickie James‘s Knockouts championship, and Velvet Sky made her return to Impact Wrestling. In an interview, she was grilled about her real life boyfriend, Chris Sabin. We also saw – little – development in the Brooke Tessmacher/Bully Ray story line. She brought out an honorary leather vest for the newest member of Aces and Eights.

Alrighty. Next on the agenda was Gail vs. ODB.

Seconds later, ODB pulls out a roll up for a fall of her own!

After some intense back and forth, lots of physicality and plenty of cleavage (thanks, ODB!) we had our third and final fall of the match-up. ODB turned the tables on Gail and attacked her with her own, modified version of the sharpshooter. With that, Gail tapped and ODB was crowned the number one contender. It was a nice match, but they appear to have rushed this feud a little bit. Wouldn’t have hurt them to drag it out a little bit more, maybe even only another two weeks.

Moving on to Velvet Sky, we saw her backstage with a guy chasing for an interview. He asked about ODB, to which she replied that ODB is a great wrestler and she thinks ODB could be the one to take the title from Mickie. Velvet also reminds us about the Knockouts pay per view set to air next week. She says there’s so much undiscovered talent out there, that the division is red hot and that the fans are in for a surprise. Awesome. Next the interviewer changes the subject to Hardcore Justice and how Velvet didn’t appear when she was scheduled to. She says it broke her heart but she had personal issues to attend to. Namely, Chris Sabin. Velvet blows it off and says they keep their personal and business relationships separate.

Brooke made another appearance in the closing segment of Impact. She was by her man’s side as he went toe to toe with Hulk Hogan. She looked every bit the perfect heel girlfriend while doing it, too.

So in terms of a match, tonight was good. A two out of three falls is always entertaining, but I’m not sure how long a feud between Mickie and ODB would last? Honestly, I don’t know. I suppose we’ll just have to wait and see. I definitely don’t think this is the end of Gail/ODB. Who knows, maybe it’ll be a three way going forward? All I do know is that I’d like our Knockouts champ back on the show, and soon.

That’s all for this week! Eleri out!