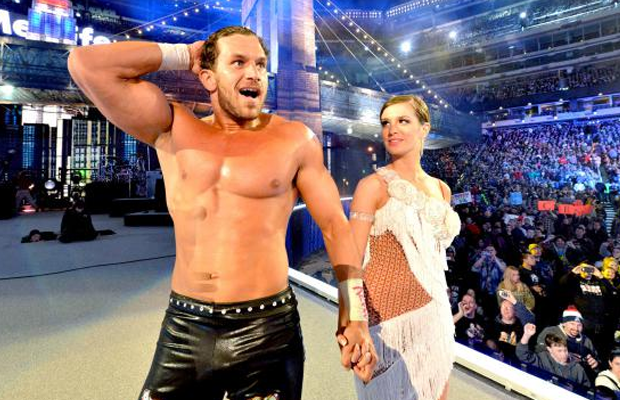 Remember that dark haired woman who use to accompany Fandango to the ring before Summer Rae? She even strutted her stuff with him down the endless ramp at Wrestlemania 29. Well, we finally know her identity. And no, it’s not the imaginary one Cryssi wrote for her.

Despite not being even introduced to us on TV, the woman’s name is Andrea Lynn. She’s a a 20-year-old senior at the University of Buffalo and a dance instructor at the Fred Astaire Dance Studio. The valet has been dancing since the age of 5 and is an expert in ballroom dancing, tap, jazz and ballet. The Buffalo News recently conducted an interview with her to find out how she came to be Fandango’s partner.

According to Andrea, the WWE called the Fred Astaire Dance Studio on February 28th looking for a dancer. They were coming to Buffalo and needed someone to accompany Fandango to the ring in his big debut. No auditions were necessary.

A few days later, Lynn was making her WWE debut accompanying Fandango to the ring and began a two month stint with the company.

“Usually for ballroom stuff, everyone is in glitter and sparkles and fancy costumes,” said Lynn, who uses only her first and middle name professionally. “Everyone, when you go to a ballroom event, is in some sort of formal attire. Backstage at Wrestlemania, however, the guys are in sweats and T-shirts – it wasn’t the same type of show that I was used to.”

All of this was very new for Lynn, who wasn’t a fan of wrestling.

“I actually had no idea who anyone was,” she said. “I mean, I was aware of it. Like, I know who Hulk Hogan is and Andre the Giant is and stuff like that. But my family was never really into that. We were more of a theater, music, dance-type family.”

Obviously, the character Fandango has taken on a life of its own and the craze is sweeping the nation.

“That’s not dancing, not at all,” she said, shaking her head. “That’s not giving the ballroom world justice. I can teach people how to dance if they want to learn.”

It’s been a few weeks since Summer Rae has replaced Lynn full time, but it looks like Lynn was not “let go” by the company. The WWE has left that door open.

Who do you prefer by Fandango’s side: Andrea Lynn or Summer Rae?