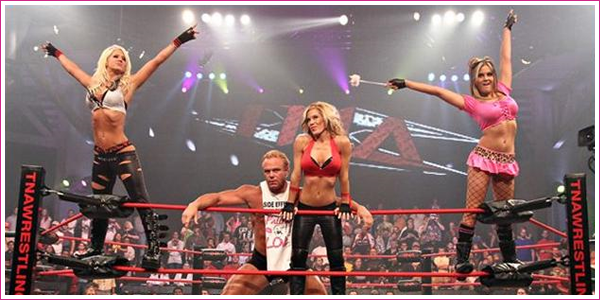 Welcome to the Impact Redux! This Week’s Impact pitted the newest beautiful person, Madison Rayne against the talented yet boring Taylor Wilde. To add fuel to the fire The Beautiful People and Cute Kip were at ringside as well as Roxxi and The Governor and Traci Brooks as guest ref:

While this was a welcome change from last week’s four corners debacle, the match was to short for my liking. I expect this from WWE, but TNA usually gives their female competitors a good amount of time. On the plus side, these SHIMMER alumnus had great chemistry in the squared circle. There were moments where the action stalled a bit, but overall a good showing from both Knockouts. As expected, ‘Knockout Law’ Traci Brooks inserted herself but paid for it. Also announced was a second Knockout PPV match, as TBP will be facing Roxxi, Taylor and The Governor at Destination X.

The match was OK and the announcement was awesome, but what really stole the spotlight for me was The Beautiful People’sÂ name change.Â InÂ a backstage segment Love and SkyÂ announced that, with the addition ofÂ Madison, The Beautiful People willl now be known as Mi Pi Sexy.Â Seriously. First of all, TBP has had more name changes than Diddy and now this?! Well, at least it’s good for a laugh.

This week’s Impact also saw theÂ debut (If you want to call it that) of new Knockout Jenna Morasca, in a backstage interview. When asked what she did with herÂ million dollarÂ prize from Survivor she responded, “…IÂ turned it into severalÂ millions” Yeah…Â right. If she’s a multi-millionaire I’ll eat my Chucks right now.

When it comes to what matters most,Â the Knockouts Title,Â no development at all. It seems that TNA has too many Knockouts and not enough time toÂ cater to them all. Looks like Sojourner Bolt and Awesome Kong will have to wait until Sunday to show usÂ whatÂ they’veÂ got.Â Â Â

PS: Sorry the Redux was late this week. I’ll try to have it up by Friday in the future.