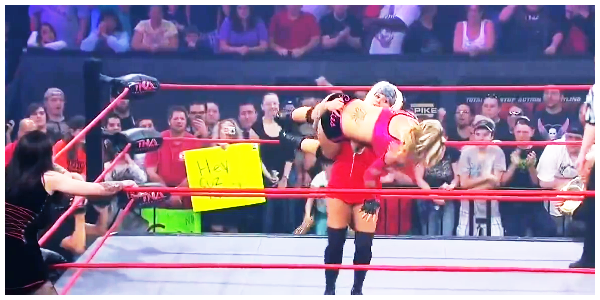 For all the crappy booking we’ve been forced to watch on TNA as of late, this past Sunday’s Lockdown was a refreshing treat. The cage match between The Beautiful People and Angelina and Tara signaled the end of some old angles and the beginning of some fresh ones. We were privy to a Tara turn, a brand new Knockouts Champion, and the culmination of the Beautiful People who have now reached their highest peak. The thought of a face Angelina and pyscho Tara feud was salivating to say the least and the announcement of a Knockouts Tag Team Championship match for Impact with the stipulation that Daffney would have a mystery partner led to plenty of afternoon speculation of just who that could be. Impact looked promising and the Knockouts seemed to be floating leisurely up, up, up.

Then Impact aired and what we got was a horribly short, stupidly booked match that made little if any sense. An injured competitor made her return and it went unnoticed because she wasn’t given a ring entrance. Angelina and Tara were left off the show which lead to much shaking of the head. How can you have such a dramatic angle the night before and not have it picked up or even mentioned on the next show? We got to watch Lacey Von Erich wrestle instead of Madison Rayne, who’s Knockouts Championship win wasn’t given the proper respect. Then we had to watch a big, powerful woman go down to an aerosol can of spray and get pinned for her team. There wasn’t really anything good about Impact. There wasn’t anything bad, either. It was all ugly considering everything that could have been done.

As I stated earlier, Daffney and ODB weren’t given entrances. This random ass pairing is pretty ridiculous in my opinion. It’s great that they decided to use someone different, but to pair her with Daffney? These two have nothing in common and to my knowledge, no previous interaction with one another. Maybe TNA were going for the comedy effect by making these two oddballs a team but it simply didn’t work. They were already in the ring as the pre-match glitz came to fruition which made it even more strange because TNA went out of their way to promote this match as something that could potentially be interesting. Whatever, right?

As the Beautiful People come to the ring it’s clear that the new Knockouts Champion isn’t going to be wrestling tonight. Madison is dressed in a little black dress with strappy wedge sandals. Despite all this, the ring announcer says she is going to be in the match anyway, while Lacey is the one at ringside. Madison didn’t even try to hide the can of what we’re going to call hairspray for the sake of this recap. I mean you can just see it and tell she is going to use it and that’s how the match is going to end. After TBP did their thing, Daffney and Lacey are two who decide to start the match off. It takes all of two seconds for Lacey to change her mind about that and she tags out to Velvet Sky before the match even properly begins.

Velvet comes in screaming and goes straight for Daffney, but Zombie Hot takes her down with a drop toe hold that leaves Velvet grabbing at her nose for the second night in a row. Daffney is a quick worker and grabs Velvet in a headlock, using that so she can drive her knee right in Velvet’s gut. Velvet’s face then gets slammed on Daffney’s knee and she’s already on her back seventeen seconds into this match. Instead of going for the pin, Daffney elects to pick on Lacey and chases her around the ring. LVE slides into the ring with Daffney on her heels, but Velvet is ready. She unleashes her fists of fury on Daff, and throws her into the turnbuckle. The announcing is making me cringe at this point because Mike Tenay has decided to remind us all that Daffney picked stripping out of the Lockbox and LVE stole her thunder on that night.

Call me crazy, but something tells me Daffney really doesn’t mind that Lacey came out to the ring and started dancing around in lingerie that night.

But anyway, Daffney is now in the corner of the Beautiful People and Velvet makes the tag to Lacey. Lacey seems happy to get into the match now because Velvet just chunks Daffney down in the middle of the ring. She does a fancy little back-handspring, but since this is wrestling and I like Lacey, I’m going to say she did a standing moonsault. After LVE’s standing moonsault she drops an elbow, which is becoming her trademark move. Lacey prances and poses, happy with herself and life in general, but her smile quickly turns to a look of sheer terror when Daffney puts a death grip on her wrist. Needless to say, our perky blonde tags out to her angry, devil blond partner. Velvet kicks Daffney away from our girl Lacey (thank God!) and starts treating Daffney the same way she treated Tara last night which isn’t very nice. Daffney has her throat stepped on and her back slammed into the mat a few times, and Velvet is all smiles because at this point she feels like the queen of the TNA world. Velvet goes for a cover, but Daffney kicks out after two which makes Queen Vel Vel scream in anger.

For some ungodly reason, Velvet gets the bright idea to strut across the ring after viciously clubbing Daffney in the back and climb to the middle rope. She shakes her butt a bit before jumping off but Daffney greets her with a shot to the midsection. Velvet crumples over in pain and Daffney decides it’s time to make the hot tag to ODB. Velvet doesn’t want that to happen so in her distressed state she grabs a hold of Daffney’s ankle and tries to keep her from getting to the corner. Well to make a long story short, Velvet fails, Daff makes the hot tag to ODB, and the formerly MIA Knockout starts making Velvet her woman. She eventually tosses Velvet into the corner and absolutely crushes her with a huge splash. A woozy Velvet stumbles into ODB’s clutches, gets squashed thanks to a super fantastic slam from ODB, and the popular ODB leaps to her feet a la Shawn Michaels before he got super old.

A worried Madison Rayne jumps up on the apron and starts flirting with the referee. She just wants to get Velvet out of trouble, I suppose. It doesn’t really help because ODB has gotten Velvet with a roll-up. What does help is the fact that Lacey has disposed of Daffney on the outside and has taken that can of hair spray. ODB moves away from Velvet and goes to bitch at Lacey, but Lacey sprays her in the eyes which leaves the powerful woman blind. Velvet rolls up ODB and Madison jumps off the apron. The referee turns around and counts the 1, 2, 3 because ODB is in such distress she just can’t get her shoulder an inch off the ground in time. The Beautiful People have retain their Knockouts Tag Team Championships in a titillating three minute match.

There’s really no need for me to launch into what was good, bad, and ugly because as I already stated, there wasn’t anything good or bad. I don’t want to be typecast as this week’s negative Nancy, but really. There just wasn’t a whole lot going on for the Knockouts tonight. I suppose I can indulge you all and try and pick out some positives but don’t expect very much. The Beautiful People looked amazing. I found Lacey’s ring attire to be questionable, but it’s Lacey. Who are we to judge her? She’s just smiley and happy, and glad to be out there so I’ll put my fashion police badge aside and give her this week’s free pass. I already said I loved Velvet’s outfit. It’s the same one she wore last night and it really pops in HD. Madison looked adorable and lets face it, it’s hard to go wrong with a little black dress unless you’re a WWE Diva. I’m not going to arrest Daffney or ODB either. They wore what they usually wear and it works for their characters. I enjoy any time I get to see Daffney on my television and welcome back to ODB. I wish TNA would give her more of a purpose seeing as how she is a former two-time Knockouts Champion, but that’s asking to much.

I’m really horrified by the lack of Tara and Angelina tonight. Something should have been said about that altercation they had at the end of their match at Lockdown. It made no sense to just forget about that and I’m actually glad Impact tapes tonight for next week so we can see if anything progresses from that. Overall, it was a crappy night for the Knockouts. They got the short end of the stick again and it just goes to show that you can’t look to far ahead when it comes to TNA. I’ll tip my Diet Coke with Lime in the air and toast to the Knockouts in hopes of a better week next week, and I encourage all of you Knockout fans and readers to do the same.