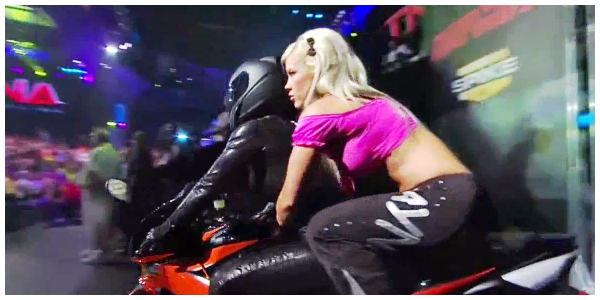 On last week’s Impact, the entire world witnessed Angelina Love win yet another TNA Knockouts Championship. The response to her historic victory was pretty underwhelming and rightfully so. Madison Rayne had been doing a phenomenal job as champion and why the title was taken from her we’ll never know. Seeing Angelina as champion brings nothing to the division that wasn’t there before but that’s just the state of wrestling these days. What’s done is done and there’s no use in questioning it anymore. It’s a brand new week and on this week’s Impact, we were treated to a Knockouts Championship rematch featuring Angelina and Madison.

Before the match go underway, we were treated to backstage promo featuring Angelina and Christy Hemme. Christy told all of us that tonight Madison was evoking her rematch clause and that there was a good chance that she wouldn’t be alone. Angelina said that with Madison it was never a fair fight because she was scared. Angelina reminded us of the last time she was Knockouts Champion. She complained that she had to literally give the belt back to Madison because the former title holder threw a little hissy fit. Angelina went on to say that Madison would only get the title back if she pried it from the champ’s cold, dead hands. Then she teased that she would have her own back-up with her tonight.

The challenger, the aforementioned Madison was the first Knockout to make her way to the ring tonight. She didn’t enter in the usual, Beautiful People fashion either. She rode out to the ring on the back of a motorcycle driven by Tara Mystery Woman. Madison was in a foul mood upon entering the ring and she started screaming at everyone in site. She jawed with a few fans and then turned her PMS rage to Earl Hebner. Eventually, Angelina’s music began to play and the Knockouts Champion made her way to the ring. She paused at the end of the entrance ramp and waited for the music of her back-up to start playing. A few seconds later, the Beautiful People theme started to play again and a delicious looking Velvet Sky made her way out. Madison flipped out upon seeing Velvet and she demanded that Mystery Woman get out of the ring and go take care of business. Mystery Woman made a beeline for Angelina, and Madison and Velvet headed for one another.

A brawl broke out between all four women, with Madison getting the upper-hand over Velvet. She dropped Velvet face first into the steel ring steps, and it’s a wonder the impact didn’t bust Velvet’s nose right then and there. Absolute sick bump to begin this melee. Angelina whipped Mystery Woman into the ring and attempted to pull her helmet off, but Madison came and made the save. She clubbed Angelina from behind and began to bounce the other woman’s head off the ring apron. Hebner tried to get Madison to take the match into the ring and finally she obliged. A lot of shrill screaming ensued as Madison hooked her legs over Angelina’s shoulders and turned her around. The bell had already rang at this point so the match was official, and Angelina’s face began to get slammed down into the mat over and over again. Madison went for back to back covers, but only got a two count each time. She got to her feet and exclaimed that it was a three count, but Hebner had to politely disagree.

Madison headed back to Angelina and hooked her arm underneath Angelina’s chin. She slammed her in the gut a few times with her knee before attempting a neckbreaker. Angelina rolled through it and caught Madison with a jawbreaker. That sent the former SHIMMER standout staggering but she tried to rebound. Unfortunately, Madison’s offensive attempts were met with some decisive shots delivered from the Canadian and Madison ended up on the mat. She tried to get up, but Angelina yanked her down by the hair, and after Madison attempted to get up for the second time, Angelina scooped her up and laid her out with a powerful front slam. Angelina got back up to her and feet ran towards the rope, but Mystery Woman was waiting and grabbed her around the legs to halt the momentum. Velvet came springing from the other side of the ring and beat down Mystery Woman, making sure she didn’t dare try and involve herself again.

Thanks to the drama, Madison was able to recover and she tried to fight back. When Madison went flying towards the ropes, Velvet grabbed her foot and that caused Madison to flip her lid. She wanted to know why Velvet was against her but Velvet simply pointed to what was behind Madison. Angelina put Madison away with the Botox Injection and Earl Hebner counted the three count. Angelina successfully retained the Knockouts LADIES Championship (stupid name) and she began to celebrate in the ring. Eventually Velvet climbed up on the apron and slipped between the ropes. She nodded in approval at Angelina’s victory and finally, FINALLY Angelina extended her hand. Velvet took it and both girls raised their arms in victory. Love it.

Mystery Woman and Madison didn’t let the photo op reunion last for long. They attacked Angelina and Velvet from behind and began beating the snot out of them. Mystery Woman continuously pounded Velvet’s face into the canvas prompting the Knockout to start screaming, and Madison didn’t exactly take it easy on Angelina. At one point, Madison picked up the championship and declared that it was hers before tossing it down. Mystery Woman and Madison raised their arms in victory and the scene cut to a backstage shot of Fortune.

The Good: Velvet and Angelina being back together is a good thing. I was a huge fan of the original Beautiful People and it was nice to see the former best friends reunite in the ring tonight. I enjoyed the fact Angelina teased that she had back-up for her match tonight and I was in no way surprised that it was Velvet Sky. Back in the day, these two girls were a formidable tag team and I hope this reunion ends up lasting for awhile. I will say this, I would much rather see Velvet or Madison as the champion, feuding with the other one, with Angelina and Tara as the side feud. We can’t always get what we want, so I’ll take this reunion with a grain of a salt and a sweet smile on my face and stop wishing that roles were reversed in some capacity.

The attacks before and after the match were well done. The sick bump Velvet took before the match even began was definitely the highlight of the night for me. Sans the hideous choker, Velvet looked great as well. As bored as I am with the whole Mystery Woman storyline now (who doesn’t know her identity?!) it was a lot of fun seeing her mix it up this week. She threw down with both Velvet and Angelina, and as stupid as it is to have Tara and Madison team, their dynamic together is pretty darn good. I don’t know if Tara is going to take getting bitched at by a prissy little blonde princess on a weekly basis very well, but right now it’s working. I just wish they’d drop the silly shenanigans and just reveal Mystery Woman’s face.

Angelina’s promo wasn’t bad, but it wasn’t good either. I can only categorize it as generic because that’s all it was. I’m pretty sure that it was either Angelina herself or Tara that used the phrasing “prying the title from my cold dead hands” before so shame on TNA for using that again. If there’s anything worse than recycled storylines, it’s recycled promos. How lazy can your writing be?

The match itself can go in the generic category as well. It wasn’t special or groundbreaking, or even a showcase of exceptional women’s wrestling. It was something I could see on Monday and Friday nights, and I guess this is what TNA is going for nowadays. I will say that it was nice to see Madison maintain control during the majority of the match. Nine out of ten Angelina matches feature her and no one else. I’m very glad to see TNA isn’t ready to turn Madison jobber just yet. Lets hope it stays that way.

TNA was just a mediocre show tonight. It had a nice reunion with the original Beautiful People but other than that, nothing really stood out. The storyline progression was decent, so they get a thumbs up for that. I reckon that we’ll see a tag match in the near future or maybe a Velvet versus Madison match. That’s something I’ve been waiting to see since the Beautiful People began fighting so I hope it happens soon. There’s a set of tapings this upcoming week so more pieces to this bland puzzle will be revealed and maybe this picture TNA is attempting to paint will become a lot more clear.