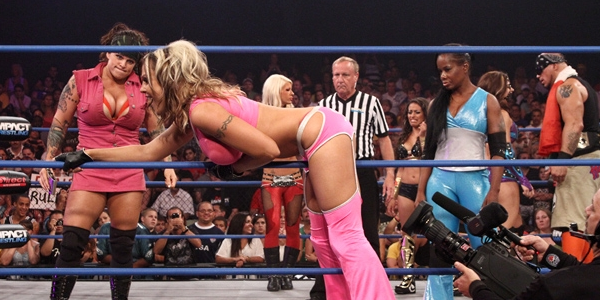 Honestly, I don’t even know where to begin. I think it is official and we can all admit that the Knockouts have taken over CrazyTown. They’ve packed up all their belongings and moved away from reality, settling into this weird ass bubble of a universe that is Impact Wrestling. I mean, we’ve seen some wacky mac from these women in the past but it just keeps getting stranger. If you’re wondering what in the world I’m talking about, just keep reading. It explains it all. Truly, it speaks for itself and nothing I can put into words can outdo it. Believe me.

The first to board the crazy train (on my show anyway) was the former Knockouts Champion and new number one contender, Mickie James. I have to space out the cray cray. Too much in one spot is just, well too much. I mean, do you see the crazy eyes?! I know you do! This girl is straight up angry! I had to take a step back from the screen for a moment because I thought she was about to come after me. That girl is from Virginia and they do not play there. I know. I USED to live there and there’s a reason for that. Scaring us all with her evil eye, Mickie says that she doesn’t know what voodoo Winter spit in her face at Hardcore Justice but she isn’t taking it lightly. She demands that Winter look her in the eyes, even though she’s looking into a camera lens and tells her she’s going to make her feel the burning. She’s going to take back that championship and make her feel the burn. Oh yes. It’s gonna happen. Rawr.

Backstage, again, Jacqueline and ODB are seen talking to Velvet Sky in her locker room. Vel Vel’s got a blush brush in her hand and is pink from head to toe. ODB looks like she would rather lay down in front of a train than go along with what Jackie is saying about teaming up. Together, all three of them are going to be in a match tonight. On the same side. Oh yeah. You read that right and by the looks of things, it could get very interesting. However, Jackie tells Velvet that she can trust them because if she wanted to, she could drop her right then and there. But she doesn’t. She could also kick the camera man’s ass but who can’t? Regardless, it is obvious that Jackie is clearly the bigger woman because ODB stalks off, growling like a hungry bear about the whole thing.

The only match of the evening comes in the form of a 6-Knockout tag team match which has a couple of odd pairings, if I do say so myself. We know that Velvet is teaming with Jackie and ODB but the first team out is Mexican America’s Sarita and Rosita. They’re teaming with…Angelina Love. I think she may even have her own theme song now. Right. Sure. I get you. Okay. I really don’t get it at all but who am I to question? I’m just the lowly mind behind the Impact Write-Up. I’m not supposed to understand it. Haha. Regardless of the confusion, A-Love is in the ring with Rosarita and out next is the definite awkward oddball of the two.

They hit the ramp to Velvet’s theme music, much to Jackie and ODB’s dismay but it’s not like they’ve got any to contribute. At least she gives the thumbs up. Velvet, on the other hand, looks peachy keen with the pairing and even goes back to her roots with LETTING THE PIGEONS LOOSE when she gets to the ring. ODB looks like she wants to rip her face off and well, Jackie just looks like a disgruntled mother. It’s okay, ladies. No harm no foul. It’s just one match and then afterwards, you can all go back to your corners of the cray cray TNA universe.

Jackie and Abyss, I mean, Sarita look to start things off but it isn’t long before little Rosita is tagged in, getting her little ghetto ass in some trouble due to that mouth. What’s she gon’ do now, Rosita? Beat that ass. Then she’s going to tag in Velvet, who is going to accidentally hit her with a forearm when you duck out of the way. That’s what she’s gonna do! Yeah! I mean, wait. Distracted by the failblog moment, Velvet gets rolled up from behind by Rosita but the count is no good. Velvet drops Rosita with a jawbreaker and tags in ODB who runs through the little chiquita like a speeding truck. Even Angelina takes a step back on that one.

ODB’s mini celebration gives Rosita time to tag in Sarita but ODB is still too fired up. She gets ahold of her quickly and tags in Velvet. Kicks to the abdomen with knees added, goes into a rebound but Velvet stops, laying in another kick. The only remaining BP goes for a low dropkick but Sarita steps back and catches her legs, flinging her into the corner where Rosita just nails her in the face. And the beatdown on Velvet ensues with the multiple exchanges between Rosarita, clearly leaving Angelina out of the tag loop. But, just when Velvet starts to gain her momentum, A-Love manages a blind tag and inserts herself into the match-up. Rosita, hot like fire, is quick to spout off at the mouth but Angelina just steps in her face and brushes her off.

Words can only get you so far, as Velvet quickly shows. She steps up on Angelina like someone lit a match under her ass and quickly takes her down, going for a pin. However, the Loco Latinas break it up and this springs Jackie and ODB into action. They roll through Rosarita quick, taking out the trash. This leaves Angelina in the ring and she comes back hard on Velvet, dropping her flat. But before she can go for the pin, Vel Vel’s tag partners are back in the ring. A-Love invites them to get a piece but they think twice about it, giving stiff double kicks to Angelina and dropping her with a double team suplex. They drape Velvet over, keeping Mexican America on the outside and Velvet Sky gets the pin for their team.

And are they showing team efforts in celebration? Hell yes they are because they have a point to prove. Mexican America on the other hand are not so happy-go-lucky. Rosita, always the first to step up in yo grill, gets shoved back and Angelina peaces out. Literally. And I stand corrected on the theme. It’s just her old theme, recycled to fit her evil bitch attitude she’s got going on. How rawr of you, A-Love. How very rawr.

And as if last week didn’t creep you out enough, we get another little segment backstage with Eric “I’m a Creepy Old Man” Bischoff and would-be Knockout Law, Traci Brooks. Miss Brooks is all about turning on the charm and she’s obviously using her girls to help back it up. The attention she’s getting seems to be working because Bischoff is all over her with his eyes, telling her that he thinks they can work something out. But, before they can commit to this deal, he wants to have cock…tails first. As a dear friend of mine would say, “THAT’S NOT PG!“. But what about Impact Wrestling is, hmmm? Traci, always one with a quick counter, tells him she thinks it’s a great idea but what about three cocktails? Three? Oh boy. I think I know where this is going and it is not going to flow in Bischoff’s favor. Just the way I like it.

Just to close things out on a lovely psychotic moment, I will leave you with the footage of Rosarita attacking Angelina Love in the back. A-Love is busy gabbing away on her very expensive smartphone when the Latinas come strolling in. They rip away her phone and just start pounding on her while she’s kicked back on the couch. But as everyone knows, you cannot come at the cub while the mama is away. She will come back with a force of a hurricane and rip through you with her mighty claws of death. This mama would be Winter and she comes storming in, throwing Sarita off like she weighs nothing. Her brute force them falls upon little Rosita, who gets slammed face first into the wall and then….

IS SHE CHOKING HER WITH THE BLINDS?!?!

She is choking… I can’t even right now. This is some straight Jerry Springer/Jersey Shore shiz here. I mean, even when Hernandez and Anarquia come in, it’s like they’re just strolling in to watch the fight. Now I know what goes on downtown on Friday nights. I mean, really. Who chokes a bitch with the mini blinds?

Thoughts: Another dose of absolutely insanity from the Knockouts this week. I’ve come to expect chaos and crazy from these women and they never fail to meet my expectations. Not a bad match, overall. It was kind of slow in some points but I think I enjoyed the backstage segments among everything. So many of them. Anyway, that’s it from me this week. I’m hoping to get my computer issues taken care of ASAP so that we won’t have this issue anymore. I shall see you darlings next week! xoxo