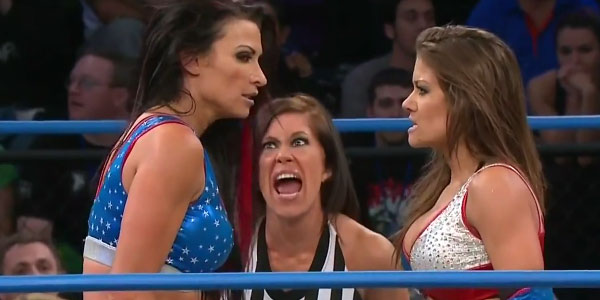 Greetings and Happy Holidays to all you jolly old prostitutes, and welcome to another thrilling edition of the Impact Write-Up. As you all know, last week, my benevolent ruler, Miss Karen, was fi… was fir… came to terms on a decision to part ways, and I have been distraught all week over it. But, I am here to recap Impact for all you merry skanks, and recap it I shall!

Tonight, we had a new Knockouts VP take over, and not only that, but a match was booked to pit Tara and Brooke Tessmacher against one another with Madison Rayne as the special referee. In other Knockout news, ODB went on a date with a weird beard and wrestled against some men… so let’s get this underway!

We head backstage where one half of the Knockouts Tag Team Champions, Madison Rayne, is seen talking to a camera man. He mentions that she has a big announcement to make, to which she corrects him by stating that this is a HUGE announcement, not just big. She then drops the bombshell that Miss Karen officially appointed Madison to become the new VP of the Knockouts division! He asks Rayne why she’s wearing a referee’s outfit, and she says that we can consider this her first official piece of business. She states that we won’t want to miss what’s up next, and to not go anywhere.

We are then taken to, I’m guessing, a sea food restaurant where ODB and Eric Young, who I will now dub Creepo Beard, are out on a… tag team dinner, if you will. He tries to touch her hand, but she shoos him away and complains about the salad. Creepo Beard has a toast for the two of them for their official partnership, and date. ODB quickly corrects him that this is a business meeting, but she then sips her beverage to determine that it’s water and demand that she be given some beer. Creepo Beard tries to talk to her, but she becomes distracted by a lady that won’t stop staring at her. She proceeds to question if the woman has never seen a pair of boobs before, as she shakes her gals up and down. Creepo Beard corrects ODB that he thinks its a man instead of a woman, and ODB proclaims that she needs to wax. After they get some ranch dressing, Creepo Beard tells ODB that their opponents are Antarctica (Anarquia) and a tatted up guy named Shannon. A waiter then starts to pour some beer for ODB, but Creepo Beard gets up and… does something to the waiter? I think that was supposed to be some type of a handshake, but I don’t understand Creepo Beard’s type of humor. He sits back down and they argue if they’re out on a date or not, as ODB says if this was a date he would’ve brought her flowers or chocolate since she is a lady after all. ODB complains for some meat, as Creepo Beard heads out to the bathroom. He can then be seen searching the kitchen for gifts to give to ODB.

The sight of me typing that can only mean one thing, as out walks our benevolent queen, and the new VP of the Knockouts division, Madison Rayne. She executes her trademarked royal wave to all of her fans, as she walks into the ring and grabs a microphone. She then calls out Tara and Brooke Tessmacher to the ring, asking if they can please come out to the ring… and by please she means, in her most radiant of voices, NOW! The two ladies do as told, as they walk out from the back in their USA gear to the sound of Madison Rayne screeches.

She tells them to be quiet, as Madison says MISS KAREN officially appointed her to be the new VP as the crowd chants USA at three American women. She claims that she has great responsibility… responsibility to destroy all of the people beneath her, and that starts with TNT. She claims that all of their cuteness together makes her want to throw up, and that their love affair is about to split. Madison then announces that tonight we will see Tara face Brooke in a match that she will referee. She also drops the bomb that this match will begin after the advertisers play some ads to pay her hefty salary. Madison says that there can only be one queen of this court, and it’s HER. A commercial break soon follows, as we return to see the two friends trying to stop the match. Madison starts to scream at them that she will fire them both if they refuse her orders. Brooke and Tara start to circle the ring, as they lock up and Tara takes control with an arm lock. Tessmacher reverses the hold into an arm lock of her own, but Madison catches on that they aren’t applying pressure and thus she snaps the hold and screechingly asks if they think this is funny? She informs them that sending their butts to the unemployment line is funny to her!

The two then circle each other again, as Tara Irish whips Brooke into the ropes. Tessmacher comes back with a nice sunset flip, but Tara reverses it. They exchange roll ups for a few moments, even fooling Madison into counting while Brooke was on her stomach. The Killer Queen is not amused with these shenanigans, as she backs Brooke into the ropes and demands that she will fire them both. The two then agree to put on a match, as they lock up and Tara backs Brooke up into the corner. Madison slaps Tara in the back of the head and tries to make Tara think Brooke hit her. TNT lock up again, as Madison hits Brooke this time and makes her think Tara did it to try to build some tension between the two. They lock up once more, with Tara taking control using a wrist lock. Brooke cartwheels out of it and applies the hold onto Tara, as the veteran cartwheels herself out as well. Another lock up, as Brooke snapmares Tara and kicks her in the back. Madison begins to scream at the two to try and turn them against one another some more, as Tara locks in a headlock and slams her down. Madison asks Brooke if it hurts, but Tara slams Tessmacher down by the hair.

Brooke then spears Tara to the canvas and the two begin to destroy one another to Madison’s pleasure. Tara throws Brooke off the ropes, but Tessmacher comes back with a clothesline. Tara then clotheslines Brooke and goes for the Widow’s Peak, but Tessmacher slips out and hits another clothesline with a back elbow/dropkick combo. Madison claps in the corner of the ring, as Tessmacher leaps off with a crossbody off the second rope to a ridiculously slow two count. Brooke then flies off the ropes and the two connect with a double facebuster. Once they get to their feet, they come face to face and start yelling, as Madison tries to get them to hit each other. She then screeches out demanding that somebody hit somebody else, as the two then back elbow Madison to send her out of the ring. She heads up the ramp as TNT celebrate in the ring to what I believe is a double disqualification.

Also, check out ODB in tag team action as she and Creepo Beard face off against Shannon Moore and Anarquia (with Sarita and Rosita) to find out who advances in the Wild Card Tag Team Titles Tournament:

Thoughts: Can I just say that I think Madison Rayne is going to become my new Miss Karen? Not only did she call Miss Karen by her true name, but she gave me the same hilarious brilliance that the Knockouts VP before her did as well. Now don’t get me wrong, I will NEVER replace Miss Karen. She will always be the Oprah Winfrey of Impact Wrestling to me, but Madison Rayne is definitely going to give me some much needed cheering up as I mourn over last week’s actions.

Now, seeing Tara and Brooke go at it was fun. I loved when they went for all the roll ups and confused Madison because it looked like she legitimately did get confused until after counting a one. I thought the ending was incredibly well done with Madison screaming for someone to hit somebody and then both members of TNT just laying her out. I’m not ready for TNT to split at all, so I’m glad to see them end the segment still together. I can’t wait to see what next comes from this angle with Madison in charge.

ODB and Creepo Beard is what it is… I’m not a fan of him. I do think she’s funny though and I enjoy seeing her in segments. It’s also refreshing to see her mix it up with the guys and I’m interested to see just how far these two make it in the tournament, and who else ODB ends up squaring off with. Overall, I greatly enjoyed Impact even without my supreme ruler sitting on her golden throne.