KHARMA
Lightning in a Bottle 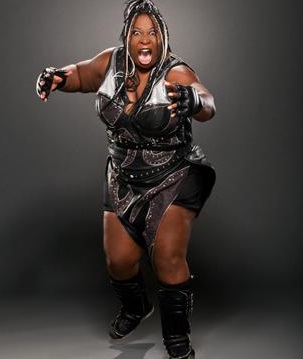 In 2011, one woman captured the imaginations of fans, wrestlers and critics everywhere — her name was Kharma.

Though she was only in the company for five weeks before shockingly announcing her pregnancy live on Raw, for those five weeks, the entire wrestling world was abuzz about the former Awesome Kong and her arrival in WWE. Kharma broke the stereotypical image of what it meant to be a “Diva”, and for a period, ignited interest from all fans, including ones who usually didn’t watch the Divas segments, as they sat on the edge of their seats to see what destruction Kharma would bring that week.

She was unlike anything we’ve ever seen in the Divas division and during her short time in the WWE, quickly grew a cult-like following. In fact, WWE’s treatment of Kharma was unlike anything we’ve seen in the last several years. For the first time perhaps since Trish Stratus‘ retirement, WWE invested in a female character so fully, promoting her debut for several weeks with intriguing vignettes and promoting Kharma’s big announcement in her final appearance several times during the Raw broadcast.

The euphoria surrounding Kharma for those five weeks proved what a one-of-a-kind performer she is. Her short time in WWE was like catching lightning in a bottle. It remains to be seen, however, if she’ll return to the WWE post-pregnancy. As they say, lightning rarely strikes in the same place twice, but for our sake, let’s hope that this time it does.