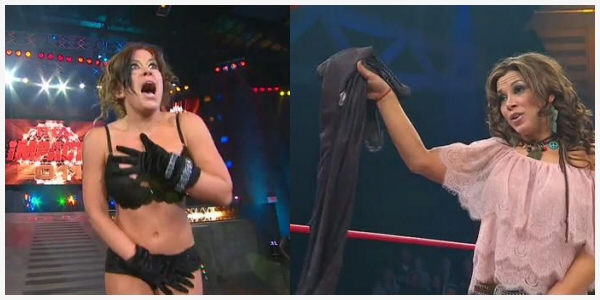 Oh hello there! Simply can’t resist my charm, can you? Haha. Welcome back to the weekly Diva Dirt Impact Write-Up. Last week, we determined new TNA Knockouts Tag Team Champions in Angelina Love and Winter. We also saw a brutal attack on Velvet Sky by Sarita which left us all pretty certain that both of them had used a strap before. It was a touching brawl. Honestly, I was choked up. This week, the beatdowns between Sarita and Velvet Sky continue and Madison Rayne gives us a glimpse into her glamorous side. Hold onto your rhinestones, people! This is going to blow your bedazzled socks off!

Back from a long commercial break, we see Sarita in the hallway talking trash against Velvet Sky. She says how dare Velvet challenge her to a match. She also says she’s got something for her. Sarita shows the gold strap again and snaps it tight. “I am gonna whoop that ass.” Go on wit ya bad self! *snaps*

And it is on to true Knockouts action! Out first, set to compete in a Knockouts Strap Match, is Velvet Sky and damn, she is well equipped. She comes out, mile long strap in hand and she is just punishing the ramp as she makes her way to the ring. Can you blame her? If some crazy bitch beat the hell out of me with a strap, I’d be furious too. Although, I do have to say, it looks like Vel Vel has used that strap before. *whistles* Her opponent, Sarita, comes out next, dressed in her true Mexican colors but it comes off looking more like a late Christmas outfit. Definitely not a fan of this one. Apparently, in this match, the women will be strapped together at the wrists with that long strap keeping them together. In order to win the match, either Sarita or Velvet must restrain their opponent long enough to touch all four top turnbuckles without interruption.

Despite practically begging to get out of the match, Sarita finally gives in and the bell rings. It is on like Donkey Kong! Both women circle one another around the ring, trying to gain leverage but in a blink, Sarita tries to take her end and go home. But Velvet isn’t going to take it. She follows and bunches up her end of the leather, ready to strike. Not one to truly back down, Sarita charges and slams Velvet back into the ring apron, quick to make valid use of that leather strap. Thank you, Ma’am! May I have another? Can I just insert my “Ouch!” here and be done with it? Because that honestly looked like it hurt.

Sarita muscles the blonde bombshell back into the ring and wraps the strap around Velvet’s hands, dragging her around like luggage. She taps the first two turnbuckles with ease but Velvet isn’t sticking around for the third. She fights back, restraining Sarita until she can manage to drop her to the mat with a cluster of takedowns. In a trick manuever, Vel Vel crawls under her opponent with the strap and yanks, flipping Sarita over and snapping it off her wrist in the process. This gives Velvet ample room to make nice with her second calling: a dominatrix. After a few strikes, the referee fastens the strap back to a reluctant Sarita’s wrist just so she can fall right back into an assault from Velvet.

The spicier half of The Beautiful People is relentless, slapping that leather strap down on Sarita like a taskmaster. She finally wraps the strap around Sarita’s throat and, back to back, leans forward to choke her. Good for Velvet in getting some revenge from last week. Toting Sarita around like Santa’s gift bag over her shoulder, Velvet slaps her hand down on her first turnbuckle and heads for the second. She reaches for it and again, slaps her hand down on the casing. Little does she know that as she goes for the third, Sarita has also been touching her hand to each turnbuckle on the trip around. As it comes to the fourth and final corner, Sarita finally starts to fight back and ends up flipping Velvet over to the mat.

With a hard slap to the final turnbuckle, Sarita wins it! Oh, but her fun is not over. She takes that strap straight to the backside of Velvet Sky, punishing her even further. Velvet cries out, holding her back and arm. Sarita looks to continue her assault from last week but the other half of The Beautiful People, Angelina Love comes running in for the save. Sarita hightails it out of the ring and heads for the back, leaving Velvet to scream at Angelina in the ring. “Just leave me alone!” Okay Princess, I know it stings but there is no need for a tantrum. Now, go to your room and count to nine hundred. Backwards.

During the commercial break, Velvet is screaming at Angelina who just wants to kiss and make-up. Velvet takes the strap with her, heading to the back. Someone is feisty. We flash to the back where Angelina is seen looking for Sarita and oh buddy, does she find her. Quick on the attack, Angelina goes after the Loco Latina with no restraint, once again getting payback for her BFF. But as it has come to be habit, just as Sarita gets the upperhand and looks to use that gold strap on Angelina, Winter appears and grabs Sarita by the back of the head. I’m still not sure what curse she muttered in her ear but I’m pretty sure the next time we see her, she’ll have a shrunken head. I have to say though, Winter is looking fierce as ever but that dead quail wreath around her neck has to go.

Later in the show, we see Madison Rayne walking backstage dressed to the nines in a black evening gown. Her hair is done like she’s going to the junior prom and that Knockouts Championship must be her date for the evening. What she’s got up her satin glove? I have no idea. I’m going to assume it has nothing to do with Tara being backstage at Eric Young’s New Year’s Eve party. She causes a riot with her cougar ways but it’s short lived.

Madison comes out to the ring, introduced and carried by four men, albeit not so attractive men. They are all dressed out as if it were a black tie affair. They carry her down the ramp and all four of them lift the ropes so she can enter the ring, waiting like the good little man servants they are. The Champion takes her time, walking around the ring, waving to her loyal subjects. She allows all four men to kiss her gloved hand before moves onto SoCal Val, screeching at her to hand deliver the microphone. “Drink it in, everyone. Drink it in. I HAVE SOMETHING IMPORTANT TO SAY! SHUT UP!” Oh Madison. Such class.

She tells everyone that when she put on the $79,000 dollar, one-of-a-kind Vera Wang gown, she was just as speechless as they were. She basks in her own glory, talking about how perfect she is and it flows into a rip on Mickie James. Madison goes as far as mocking a Southern accent, calling the number one contender a cornfed, flannel wearing slut. HARDCORE COUNTRY! To defend her honor, out steps Mickie James. Where she got that top, I’ll never know. She comes out and rips the microphone away from Madison. “I guess this where I say something like..” POP! Mickie slaps the self-satisfaction right out of Madison’s mouth. To top it all off, she even rips that so-called “one-of-a-kind” dress right off of the Knockouts Champion’s back, sending her to the back in her lacy underwear. So much for all that perfection, huh?

Thoughts: I was satisfied this week. The match between Sarita and Velvet was solid, considering it was a strap match. It is always exciting when you get to see female wrestlers use foreign objects, no matter the capacity. Once again, however, Velvet is left the loser in the feud with Sarita. The play on a future feud with Angelina tickles my fancy because there is a sick side of me that loves to see happy couples break up. Of course, adding Winter as the “other woman” just makes things so much more interesting. Speaking of which, I think I am finally convinced that she is a VooDoo Gyspy Queen. She put some kind of curse on Sarita with that mumbo jumbo. Haha. I definitely see this helping Sarita on her quest to become a top heel in TNA, as you all pointed out last week.

Can I just say that I absolutely laughed my ass off during the Madison Rayne promo? She may be cheesy and have a voice like nails on a chalkboard but she can work a microphone. She definitely kept the insult trail fresh and hammed it up with that fake accent. I hate to say it but I think that small segment knocked that strap match out of the park. I certainly enjoyed it more. Even Mickie James made me smile. Madison probably has to be one of my favorite heels and honestly, as stale as she has been as Knockouts Champion, I think this feud might refresh her run. At least, I hope it does. She gave me that hope tonight. Now if only I can find the thrift store where she picked up that Vera Wang…

It was an interesting week on Impact this week, ladies and gents. It marked my fourth installment of the Write-Up and I am happy to say that I love doing this. I sincerely hope that you all enjoyed your Chrismukwanzakuh(you get it) and may you all ring true into the New Year! 2011 is bringing great things for all of us here. I can feel it. I look forward to sharing the first Write-Up of the new year with you all next week. Until then, let me know how you felt about this week’s Impact and how I’m doing so far. The opinions of the readers means a lot to us here at Diva Dirt. You keep us afloat. May you all be blessed with cookies and creme kisses as you travel into 2011! So much love!