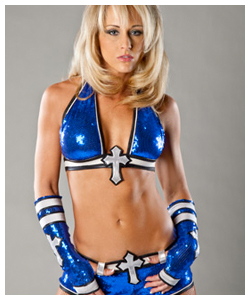 #1: MICHELLE MCCOOL
LAST YEAR: #1 – 2008: #1
For the third year in a row, Michelle McCool tops the Perfect 10 and really… is it any surprise? Love her or hate her, the controversial Diva has had continued success in the WWE Divas division over the past 12 months. After becoming the first ever Divas Champion in 2008, the first ever woman to hold the Divas and Women’s Championships in 2009, the question was, ‘Just what more could Michelle accomplish in 2010?’ It seemed nothing. How wrong we were.

In the past 12 months, Michelle has held both the Women’s and Divas Championships and became known as the ‘Flawless History-Maker’ by unifying the two belts in September. The cherry on the cake? Being crowned ‘Diva of the Year’ at the Slammys in December.

Continuing her feud from 2009 with Mickie James, Michelle and ‘flawless BFF’ Layla continued their mockery of James into 2010. In January, the pair held a ‘Piggie James Going Away’ party for the multi-time Women’s Champion, splattering a cake in her face in what proved to be one of the most powerful Diva segments in some time. Michelle got her comeuppance, however, at the Royal Rumble when James took the Women’s Championship from her and added insult the injury by dumping a cake of her own all over Lay-Cool.

But that was only the beginning of Michelle’s year. With SmackDown’s official consultant and friend of Lay-Cool, Vickie Guerrero, as special guest referee in a rematch, Michelle regained the belt after Vickie slapped Mickie distracting her long enough for Michelle to hit her devastating big boot.

Lay-Cool turned their attention to Beth Phoenix next, dubbing her the ‘Manazon’ and ‘Glama-man’. In April, McCool and Phoenix made history by competing in the first ever Extreme Makeover match in which the Glamazon was victorious. After suffering an ACL tear injury, Michelle and Layla managed to defeat Beth in a two-on-one handicap match in May when Layla pinned Beth. Though she was the official Women’s Champion, Lay-Cool introduced a second Women’s Title belt and declared themselves co-Women’s Champions.

While finding the time to successfully mentor Kaval to victory on NXT season two, Lay-Cool also found themselves in a tag team feud with the Blondetourage: Kelly Kelly and Tiffany. Layla successfully put away Kelly Kelly in a Women’s Championship bout at Money in the Bank in July, while Michelle successfully pinned Tiffany for the belt in a quasi-rematch.

Next up, having defeated all the Divas on SmackDown, Michelle and Layla turned their attention to Raw’s new Divas Champion, Melina, just moments after she won the belt at SummerSlam. Laying her out and making a statement that they were the top dogs in the Divas division, Lay-Cool then challenged Melina to a title unification match at Night of Champions. Despite Layla being the official Women’s Champ, it was Michelle that did battle with Melina and made history once more. This time, she had successfully unified the Divas and Women’s Championships, earning the title ‘Flawless History-Maker’ at WWE.com.

Once again sharing their newly won title, Lay-Cool became co-Divas Champions and faced off against Natalya. Michelle successfully retained the belt against the third-generation Diva at Hell in a Cell, as did Layla at Bragging Rights, but they lost the belt to Natalya at November’s Survivor Series. Adding insult to injury, that same week, Lay-Cool were humiliated on Raw by 87-year-old Mae Young who pinned them in a match which earned them a Slammy award for ‘Knucklehead Moment of the Year’.

It was also as the Slammys that Michelle won a Divas battle royal to become ‘Diva of the Year’.

Continuing to make history just in time for the holidays, Lay-Cool, Natalya and Beth Phoenix took part in the first ever Divas Tag Team Tables Match.

With the Women’s Championship and Divas Championship around her waist, two ‘first ever’ matches, and a Slammy award, it’s no surprise that Michelle McCool is once again at the top of the summit on the annual Perfect 10. As they say, good things come in threes. Can anyone knock Michelle off the top spot next year?