Impact Write-Up (December 6th, 2012): Velvet Sky is Back… and Mickie & Tara Have a Match This Sunday Too 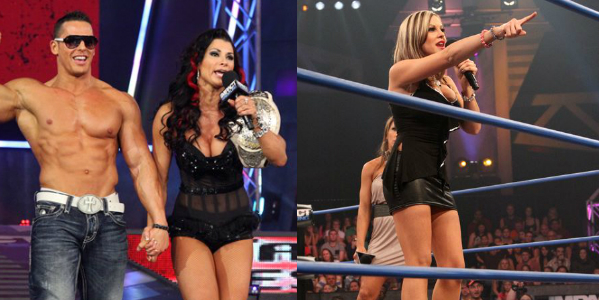 Greetings everyone, and welcome to this week’s write-up of all things Knockout related that took place on Impact Wrestling. This week, Mickie James and Tara try to add some heat to their match at the Final Resolution this Sunday, but it is Velvet Sky‘s return that seems to fortunately/unfortunately (fortunate to see her back because she is awesome in my opinion, but unfortunate as it took away from Mickie and Tara) take the center stage.

HAAAAARDCORRREEE COUNNTRRYYYYY blasts through our ears, as Mickie James walks out from the back and into the ring. It looks as if she is not here to wrestle, and that is further cemented as she grabs a microphone. Mickie addresses us for the first time since returning, about how good it feels to be back. She thanks everyone for their support, but realizes that when she was gone, she began to think about what she wanted to do in life. Mickie realized that she wasn’t satisfied sitting there, and this Sunday at Final Resolution, she’s going to become Knockouts Champion.

Suddenly, the music of our champion hits, and here comes Tara and Jesse who call Mickie a sad, sad movie. Mickie struggles to hear Tara over the chorus of boos from the Impact Zone, as Tara refutes that with a, “They’re cheering me, missy!” Jesse helps Tara into the ring and talks about how amazing her own year has been while Mickie’s was so bad. She got rid of Brooke Tessmacher as a best friend, gained Jesse as a boyfriend, and became Knockouts Champion! Mickie James doesn’t seem to like Jesse’s shoes, but before she can continue, some familiar music hits and here comes Velvet Sky!

Velvet makes her way out to the ring following her vacation as commentary puts it, before letting the pigeons loose as she steps inside. She then grabs Tara’s microphone and thanks the fans. Sky wants to publicly thank Brooke Hogan for getting her back in Impact Wrestling, before wishing both Mickie and Tara luck on Sunday. She then adds that 2013 will be the year of Velvet Sky as Knockouts Champion. If you don’t know, now you know! And with that, the segment sort of abruptly comes to an end.

Thoughts: Hmmm… I want to be honest without being harsh. I kind of have a lot of different thoughts about this segment. I think my positives are that Velvet is back, and Mickie and Tara got to hype their match the best they could in the time they were given. But on the negative side, they only really got to hype it for all of about two minutes. I’m a big fan of Velvet Sky. In fact she’s one of my favorite Knockouts the company has ever had. I’m thrilled that she’s back in the division, but to me, this was not the right way for her return to be handled. She sort of just walked out and then suddenly Mickie and Tara’s feud, which hasn’t really been built up that well from the start already, almost became nonexistent, or an afterthought if you will. The only way I think this worked is if they’re wanting to resurrect that Mickie/Velvet program that was going on before Velvet’s absence about all of the attention being on her, where Mickie seemed to get a little jealous such as when she got to be in a music video set up by Brooke Hogan.

To be honest, I don’t believe that was the intention with this segment but I could very well be wrong. This felt more like “Velvet can now officially come back, so let’s throw her out there ASAP and just forget what’s going on.” I mean it wouldn’t be the first time a Knockouts feud involving the champion got neglected without much payoff for a change last minute. (ODB/Tara anyone?) Mickie and Tara’s match is this Sunday. This was the week the two needed to give us a reason to become excited for their match since I think this is the first time they have even shared the screen together during their current program thus far. Unfortunately, while they tried to, with only a few minutes to talk, there wasn’t much they could do. I don’t mean to sound negative towards anyone, but Mickie and Tara’s match unfortunately just doesn’t interest me beyond the fact that I want to see them wrestle each other again due to how strongly I enjoyed their matches together in the past… and that shouldn’t be the only reason that I’m looking forward to seeing them fight each other. We weren’t given anything in this feud to become invested in it.

Velvet’s return also felt kind of random to me, even if I was excited to see her. There should have been a reason for her to come out. If they wanted to keep the return on this episode of Impact, you could have had Mickie and Tara trash talk each other in the ring for about four to five minutes, and then Brooke Hogan could have come out and announced to the both of them, being the current top two women in the division as champion and challenger, that she had re-signed a former Knockout as she wants wants to shake things up in the division heading into the new year. Then Velvet could have come out and gotten to speak and said that 2013 is going to be the year of Velvet Sky as champion, with both Mickie and Tara eyeing her down as if to say good luck with that. That could have added something to Mickie and Tara’s match at Final Resolution because you would be wondering, “Is Velvet going to play a part in this, or is she going to just let them compete and the better woman wins?”

I don’t know if I managed to successfully put it into words, so if you want to just get a quick sum of what I thought, I am glad Velvet Sky is back, but her return felt very rushed in how it was handled and seemed to overshadow the fact that Mickie and Tara have a match this Sunday without any reason behind doing so. So until next time, peace!