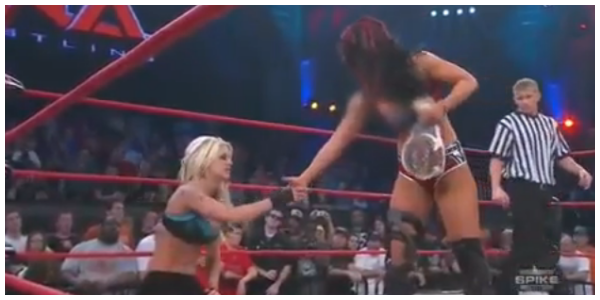 This week for the Impact Write-Up, I’m going to try something different. Instead of the usual match review with my comments thrown in there, I’m going to do just a plain review of the actual match itself and what led up to it, then at the end I’m going to list the things I enjoyed about Impact, and the things I didn’t. I hope this column turns out a lot neater and more informative than my two previous ones.

The Knockout portion of Impact started with an interview from both champion and later on, the challenger. Both put over the match and touched on issues that were impacting them at the moment, no pun intended. Angelina Love had a great line during hers; it was something along the lines of “I taught the Beautiful People everything they know, but I didn’t teach them everything I know.” Perhaps that foreshadows something to come?

After patiently waiting all night for the match, it finally rolls around as the main event of the evening. A video package starts us off highlighting Angelina’s ongoing feud with the Beautiful People. That leads into Angelina’s ring entrance and she’s looking pretty amazing tonight, in my opinion. She plays to the crowd, who clearly love her, and gets in the ring looking confident and relaxed about this match-up. Tara comes out second, with her championship strapped around her waist and her spider with her, of course! The match gets underway after the referee lets us know this match is indeed a championship bout. The two old rivals and new frenemies lock up and start jostling back and forth for position. Tara gets Angelina in a headlock and takes her down to the mat. She doesn’t let up on this but Angelina uses her strength to muscle Tara into a pinning position, but she barely gets a two count. The two women start moving around on the mat and Angelina gets Tara in a headscissors. What follows is a nice little series of wrestling between these two talented women. Tara rolls out of the headscissors and flips over Angelina, going for the pin. She gets a two count before Angelina bridges up. A few reversals happen and then Angelina executes a backslide and gets a two count before Tara wiggles out of it. The two women continue to actually wrestle before we’re interrupted by a far too long commercial break.

The match returns and we’re treated to even more chain wrestling from Angelina and Tara. Angelina takes the advantage for the most part of this, but Tara does a cutesy cartwheel thing and gets her upperhand back. It doesn’t last long before Angelina gets Tara into a pinning position and gets another two count. After Tara kicks out, Angelina gets her up and forces the Californian to eat a face full of turnbuckle. The blonde Canadian attempts to make Tara eat the opposite one, but the crafty Tara reverses it and Angelina finds herself in a world of hurt. Tara whips Angelina into the corner and charges, but Angelina lifts up and then rolls down Tara! She rolls her up for a pin but only gets yet another two count. Tara quickly gets up and gets Angelina in position for a nice sidewalk slam. She now tries to get a pin but Angelina powers out after a two count. Angelina is slow to get up and she’s gripping her lower back, but when she does make it to her feet she throws a few shots at Tara’s face then sends her into the ropes. She misses a kick and Tara catches her. She sets Angelina up for the Widow’s Peak but the crafty Angelina slides down and gets Tara in a pinning position. Tara rolls out of it and gets her entire body weight on top of Angelina, pinning her flat to the mat. Tara finally… FINALLY gets the W in a most amazing match-up.

Two competitors show some nice sportsmanship after the match. After celebrating by herself for a few seconds, Tara extends her hand to her former rival and picks her up off the ground. They share the spotlight for a moment before Tara turns around and the Beautiful People run down to the ring. The start beating down Angelina and for a hot minute it seems as if Tara isn’t going to return the favor from last week. Thankfully she does by flooring Velvet Sky with an absolute beast of a clothesline. Lacey von Erich and Madison Rayne both meet similar fates and together, Angelina and Tara fend off the three Beautiful People. They end up sandwiching Velvet, who looks scared for her life, and the distraction allows Lacey and Madison to sneak up behind the two other women who just put on an amazing match. Angelina and Tara just aren’t in the mood tonight, and finally TBP retreat and start backing up the ramp. Advantage Angelina and Tara.

Wow. What a great night for the Knockouts.

This match left me very happy and satisfied for a number of reasons. It had great length, brilliant wrestling, and it told a story of two longtime rivals locking up once again. The Tara/Angelina feud from last year received a lot of mixed reviews. I wasn’t a huge follower of it to be honest, but I kind of wish I would have paid closer attention now. Their wrestling tonight was great. More often than not, women aren’t don’t get the opportunity to wrestle so beautifully. It’s either due to their booking or limited abilities, and it was so nice to watch these two do what the men do and do it better in some cases. I truly feel that Angelina and Tara had the second best match of the night topped only by AJ Styles and the Pope. I’ve been extremely critical over TNA since the Hogan/Bischoff era came into effect but there’s very few things I can complain about tonight. It wasn’t all sunshine and rainbows, but it was pretty darn close. I would have liked a better ending. They deserved better than some cheap little roll-up ending. I see it as a negative, but I know some will see it as a positive or overlook it all together. I just feel that such a well put together match could have had a more defining ending, but it is what it is.

The whole frenemy thing between Tara and Angelina continues to grow and I can’t help but wonder if there is a catch to this whole thing. Perhaps Angelina is still a Beautiful Person deep down and at the end of this whole thing, she’s going to turn on Tara and re-align with her girls, Knockout Championship in hand? That may just be wishful thinking on my part, but it would also be a pretty good storyline if they went that route. I don’t wanna delve to deep into it because knowing me I’ll get excited about it and then it won’t happen. Overall, I would say that this was a great showing for the Knockouts. The Beautiful People looked great. Angelina and Tara looked great. Storylines were continued and we actually got see a good showing from the champ. Great, great night… except for Tara’s wardrobe malfunction. Sigh.

Food for thought: Would you like to see more face-on-face/heel-on-heel matches or do you prefer the standard heel-on-face bouts?