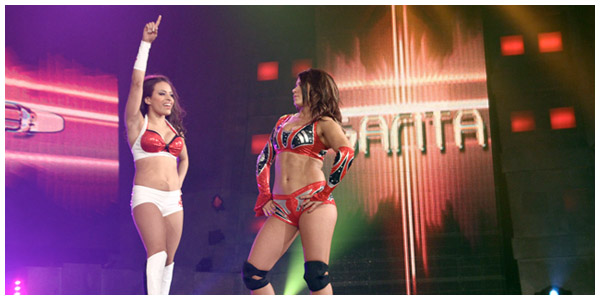 Last night’s Impact saw the debut of a new Knockout, Rosita, who was introduced as the ‘cousin’ of Sarita. How would the newcomer measure up in her debut night? And how would TNA give Mickie and Madison’s big title match this Sunday one last push? Let’s find out…

Earlier in the evening, we catch Angelina Love‘s cohorts, Velvet Sky and Winter arguing backstage before she proceeds to shut it down and try to get them on the same page. Obviously, that’s not going to work. Anyone who’s been torn between a friend and a lover who don’t like each other can probably attest to that. Which begs the question – who is the ‘friend’ and who is the ‘lover’ in this scenario? Winter or Velvet? You decide.

Anyhoo, it’s match time and we are ready to meet our new Knockout! Regardez:

Sarita is out first and her cousin Rosita is not far behind. The duo salsa down the ramp before doing a little skit in the ring. Next out is the team of Tara & Madison Rayne. On the babyface side, the BPs and Winter come out which leads to a funny yet awkward situation as Winter, like Velvet, tries to crawl through Angelina’s legs for her entrance. Angie acts violated while Winter looks rather pleased with herself. Next out is Hardcore Country herself, Mickie James. By my count, that’s eight Knockouts — okay, we’re ready to go!

Sarita and Angie start things out as the former Knockouts Champ quickly goes for a sunset flip but nope, that’s not going to do it. Angelina with forearms and an irish whip into the corner but Sarita reverses. Sarita charges at Ang but she manages to hoist herself up using the ropes and hoists her legs up on Sarita’s shoulders and hits her with a few kicks to the top of the head, not dissimilar to WWE’s Melina. Sarita throws Angie’s legs over the top rope and she lands on the other side and clocks Sarita with a forearm followed by a crossbody from the top.

Angelina now runs the ropes, but Sarita has the referee distracted. On the outside, our newest Knockout shows off her feisty side, tripping up the veteran Knockout. Ballsy move. Angie tries to go after Rosita but she gets clocked with a forearm this time.

Sarita tags in Rosita now, who clotheslines Angelina and then perches up on Sarita’s shoulders for a double team move. She hits a splash on Angelina. Rather than pinning Ang, she shows a vicious streak, mounting the former Knockouts Champ and hitting her with forearms before smashing her head against the canvas. She screams in Angie’s face as Taz notes her Latino temper. Well, that’s one way to put it. Nice show of aggression there.

Rosita tags in Sarita after a failed pin attempt. Sarita throws Angelina hard against the mat. Rosita runs the ropes, gets caught in a wheelbarrow by Sarita and then turns it into a senton splash. Great teamwork! Sarita then hits her with a splash of her own and goes for a pin but Ang kicks out.

Sarita and Rosita stomp at Angie in the corner before Rosita takes the lead in the ring. She runs the ropes and goes for a crossbody but Angelina catches her and slams her down against the mat. Ang crawls to her corner and goes for a tag to Velvet. A little face-off between Vel-Vel and Winter ensues as Rosita capitalizes, attacking Vel-Vel from behind.

Rayne and Tara distract the referee as Sarita jumps in. She slams Velvet over her knee as Rosita climbs up top. Rosita hits a moonsault and it’s all over!

Impressive debut for the pint-sized newcomer! Though Rayne and Mickie are in the match and have a title match this Sunday, this bout was all about Sarosita and getting them over. Normally, I would find it a little suspect that there was no focus on the Knockouts in the top storyline, but TNA made up for that post-match.

As the match ends, Ang and Vel-Vel head to the back as Winter follows behind. Velvet screams at the bewitching Knockout to get away from her but it seems Winter is loving the attention with a smug, wry smile on her face.

Back in the ring, Mickie has a mic and thankfully she’s not going to serenade us with a performance tonight. (Let’s save that for house shows!) Instead she wants to address her opponent this Sunday at Against All odds, Madison Rayne. Mickie is tired of Rayne attacking her from behind and tells her to get into the ring to settle things. But wait… isn’t that what Sunday’s match is for?

As we come back from a brief commercial break, Madison jumps on the mic cutting a promo on Mickie. But wait… wasn’t it Mickie that wanted to settle things? Mickie says she has ‘a lot to say’ but it’s Madison doing all the talking. Huh? Rayne cuts the usual “You’ve never beaten me” speech. Mickie, who apparently had a lot to say, isn’t even given any mic time in rebuttal as Rayne’s music hits and she exits. Um, maybe next time, Mickie?

Quite frankly, though I enjoy Madison’s character, this promo was just another one for the vault and didn’t stand out as being memorable to me. There was nothing quite memorable enough on this go-home show between Rayne and Mickie to sell their match this Sunday. An angle with Rayne knocking out Mickie and counting to 10, signaling that she could beat her on Sunday, would have worked here. This wasn’t nearly exciting enough to make you want to see the PPV match on Sunday.

Overall, a bittersweet night. Right before a pay per view match, the focus was all on the incoming Rosita and the promo that Mickie and Rayne did get A) wasn’t memorable and B) didn’t make sense from the standpoint that it was Mickie that called Rayne to the ring for a confrontation yet then didn’t even speak despite having ‘a lot to say’. Apparently the cat got Mickie’s tongue. Or rather the writers did.

Still, it was a good night for the newcomer Rosita and I look forward to more of her and Sarita in the weeks to come.