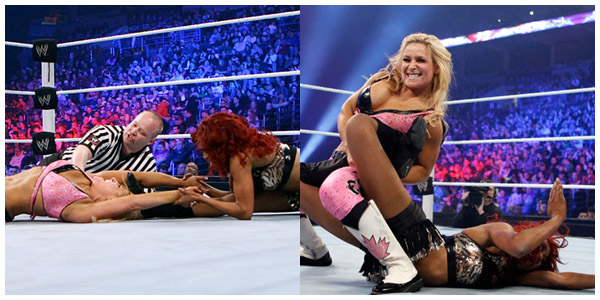 As this week’s edition of WWE Superstars kicks off, we are treated with an opening bout that pits former Divas Champions Natalya and Alicia Fox against each other. Watch below:

First out, is the Queen of Harts herself, Natalya heading down to the ring sporting her signature pink and black attire. The girl really seems like she can work any shade of pink so kudos to her. She plays up the crowd really well as a babyface, awaiting her opponent’s arrival.

And speaking of her opponent, out next is Alicia Fox strutting out fiercely down the entrance ramp, sporting her own signature Tina Turner-esque pom pom skirt and near matching tiger print top. Of course, the Rihanna weave deserves honorable mention as well. It takes bold women in this world to pull off and actually rock that particular color and style. I can wholeheartedly say that Foxy does.

The bell rings as the two sexy, smart and powerful Divas circle each other for a moment before locking up in the center of the ring. The veteran instincts of Natalya are quick to gain the upper hand as she immediately overpowers Alicia and flips her over onto the canvas behind her in what looked like to be a modified monkey flip. Very nice! The third generation Diva is quick to cover, barely gaining a one count before the foxy one kicks out. The two get back up to their feet as Natalya pulls the red headed Diva into a headlock. Natalya continues her dominance, taking her adversary down to the canvas one more time.

Ms. Fox attempts to gain the upper hand with a leg scissors submission, forcing the babyface Diva to break her iron grip. Natalya nips up, pulling Alicia into a headlock once again, a move that forces the once self-described piranha to fight harder, eventually elbowing Natalya in the gut before Irish-whipping her into the ropes. Natalya comes rushing back with a hard shoulder block. The pink and black Diva heads for the adjacent ropes, running towards a grounded Alicia, who misses her by a hair. Alicia returns to a standing position as Natalya bounces off the opposite ropes and heads for the foxy one once again. The two display impressive acrobatics as Natalya runs back at her opponent, rolling to the opposite side and Alicia jumps several feet in the air to miss her once more. The two, now standing a mere distance from each other, rush back to the center of the ring and at each other. Natalya tries to lock in the Sharpshooter but the resourceful former champion puts up a struggle and reaches the bottom rope, a slick move that forces the third generation Diva to reluctantly pull back.

The fierce one remains by the ropes a little longer, looking back at Natalya with a look of disdain in her eyes. The two rivals circle each other once more before locking up again. Natalya tries to work over Alicia’s left arm. But, the fiery Fox roughly pulls on the former Hart Dynasty Diva’s hair, causing her to fall back to the canvas.

Alicia rubs her sore arm before smirking at her dubious actions to her fellow former champion, stiffly kicking her in the head and dropping down to the mat for a pinfall but she only manages a two count.. A victory is heavy on the mind of the Foxy one, hitting a forearm to the jaw on Natalya and whipping her into the turnbuckle. Natalya’s savvy veteranship comes into play as she is able to float over her opponent with ease and pull her back down to the canvas face first to set her up a very solid and impressive Mexican surfboard. It’s definitely a treat to see a Diva like Natalya use it in her moveset every once in a while. She manages to keep Alicia in the painful move for a long time but Alicia counters into a very unique bridge pin for another two count. The Divas make their way back to their feet with Natalya charging at her sly opponent, who is up on the apron ready to strike. Alicia goes to grab the crowd favorite, but Nattie ducks and hits a shoulder to the gut.

The golden girl of the night, Natalya goes for a suplex but it is beautifully countered as Alicia guillotines her on the ropes and she falls to the canvas once more. Alicia slides back into the ring, hitting a slick clothesline on her opponent. She unmercifully stares down the fallen Natalya before covering her for another two count. The red-headed Fox is annoyed by Natalya’s unwillingness to stay down. She pulls her up, hitting a rough neckbreaker. It really looks like she was knocked out when hitting the canvas. Ouch!

The Fantastic Ms. Fox covers Natalya once more, reaching the count of two yet again. With things forcibly turning around in Alicia’s favor, she hits a stiff knee to the pink-and-black Diva before literally sliding into a splits submission move with her foot planted on top of Natalya’s head. I’m not sure what to call but it is certainly very interesting. Josh Mathews called it aggressive. I’ll go with that for now. For a moment, with Natalya’s shoulders planted on the mat, it allows the referee to start the count but he barely gets to one as Natalya lifts her shoulder off the mat. Fox screams for the match to be over already. Please, not yet!

Natalya turns over, trying to gain some momentum back into her favor but Alicia kicks her in the head as she tries to get up. Alicia returns to a standing position, stalking her prey from a distance before wrapping her legs around the mid-section of the third generation Diva in a body scissors, but Natalya is able to turn herself around to face her opponent. An opponent who wasn’t thrilled by her persistence and slaps her square in the face several times as the body scissors continues its hold on Natalya. And just like the fighter she always is, she musters up the strength to stand up, clutching Alicia like a rag doll.

The fight for momentum doesn’t last long when Alicia flips it around to cover her weakened opponent for a two count. Alicia gets to her feet and kicks Nattie in the face. The foxy one attempts a side suplex but is backed into the turnbuckles, allowing ample time for Natalya to plan her next move. Unfortunately, it was the same as Alicia’s as they both meet in a double clothesline.

The referee checks on both of the Divas before starting a 10 count. The count ends at six with Alicia standing near the ropes. She runs at a fallen Natalya, hoping to successfully execute a knee to the skull but misses. Natalya gets to her feet, kicking Alicia in the midsection. She then hits a forearm and a vicious slap for added measure. She sets up and beautifully hits a butterfly suplex. A clothesline later, Natalya has Alicia wrapped up in a stalling suplex as she runs around the ring wildly. But it appears as if she either became winded or light-headed as she fudged up the landing with Alicia landing on her side rather than her back. And of course, Josh had to make the joke it was Christina Aguilera embarrassing. Um yeah… I won’t even touch that.

Anyways, Natalya goes for the pin and reaches two count status. The two eventually reach a standing position once more. Our favorite Hart attempts her signature discus clothesline but is blocked by Alicia’s attempt for a belly to belly suplex, which is blocked by Natalya this time. She manages to roll over into the Sharpshooter, as Alicia bears through the pain for a moment but ultimately taps out.

I can honestly say that this match was so much better the second time around. There were very unique and entertaining spots with both girls. Alicia always manages to show flare no matter who she’s facing, especially with Natalya. The ‘splits stretch submission’ really impressed me, which easily reminded me of heel Melina. And Natalya’s strength is always noteworthy in any match. This has actually been one of their better matches; most likely because of being on Superstars allows them more time than Raw.

The bad in the match was really the incident of losing momentum in the stalling/spinning suplex by Natalya, where she ended up dropping Alicia on her side rather than her back. I don’t want to fault her too much as I said before I think she either became winded or light-headed.

I wish these two would rekindle their feud they had in ECW, except the roles would be reversed this time around. Neither of them are really doing much on Raw. I’d love to see them in backstage segment, seeing how they act in a verbal confrontations would be amazing. The win here did give Natalya some much needed momentum going into her title match with Eve this Monday on Raw, but it’s doubtful that WWE would want the title off of Eve so soon. A program between Alicia and Natalya wouldn’t be a crazy idea to pursue. It’s something for creative to really think about and consider.