Impact Write-Up (February 16th, 2012): Roses Are Red, Violets Are Blue; The Title May Be Gail’s, But Madison’s Coming For You! 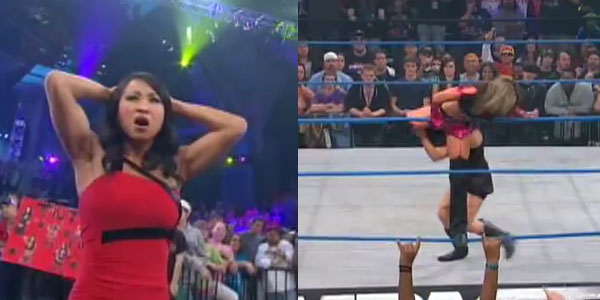 I just came to say hello, and welcome you all to another Impact Write-Up. Last Sunday night we all witnessed as our reigning and defending Knockouts Champion, Gail Kim, left the event with her title in tact, which can only mean a new contender is needed. Impact Wrestling granted us a ten woman over the top rope battle royal to fix this, which involved ODB, Winter, Angelina Love, Sarita, Rosita, Velvet Sky, Mickie James, Brooke Tessmacher, and Tara. Madison and Gail chose to sit ringside for the event, opting to scout as all of the Knockouts took the fight to one another, but enough of my talk, let’s get to stepping and start tonight’s festivities.

We head backstage to see Knockouts Champion, Gail Kim, as she walks alongside Madison Rayne to the ring for the upcoming contest. Kim claims that she can’t fathom how these Knockouts don’t realize how gracious she is in giving Tara a shot at the belt, before Madison stops her and tells her that she feels they’re on totally opposite pages as of late. Rayne continues, stating that Sunday sparked some tension, and cited the pressure as being a cause of what happened. Madison begins to compliment Gail heavily, and says that she will make sure all of the women realize the opportunity they are being given. The two seemingly make up, as Gail states how happy she is that Madison finally realizes the way this friendship is supposed to work! From there, they head out to the arena and get ready for the competition.

Out to the ring we go, as Winter, Angelina Love, Sarita, and Rosita already stand tall. The sound of Tara’s music hits, and here comes both Brooke Tessmacher and Tara! The duo pose on the stage and step into the squared circle, as ODB is the next to enter. Following her comes…ahem, HARRRRRDDCURRRRRRR COUNNTRREEHHHHHHH. Two stepping her way out is the plaid beauty, Mickie James, who poses on the turnbuckle before the final competitor, Velvet Sky, lets the pigeons loose. Wait! Suddenly, we are greeted by our Killllerrrr Queeeennnnnnnn, as Madison and Gail walk out arm in arm. Rayne demands a microphone from So Cal Val, as she continues her way into the ring and Gail orders Christy Hemme away.

Madison proclaims that she wants everyone to understand what a gracious champion Gail Kim is, in that she doesn’t owe any one of them a thing! Rayne states that out of the kindness of her heart, Gail is giving each lady in the ring an opportunity to become the number (screech) ONE CONTENDER to the Knockout title. Madison reiterates that any one of the ladies in the ring right now could potentially be the next champion, before ordering the bell to be rung as she steps out and joins Gail at ringside.

From there, all hell breaks loose and everyone goes after each other. Winter goes after Brooke, but gets hoisted onto the ring apron and ambushed, or as I like to call it, Rosa Mendes‘d, off by ODB. Brooke Tessmacher soon follows, as ODB cleans house! She lifts Rosita up in a military press position and awesomely throws her over the ropes onto both Brooke and Winter. The crowd begins to get behind Velvet Sky, as Mickie/ODB, Angelina/Velvet, and Tara/Sarita each square off. Mickie goes for the Mick-A-Rana over the top rope to ODB, but Angelina Love, Tara, and Sarita all join forces to lift both women over. Fortunately for them though, they maintain their footing on the ring apron!

Mickie goes to climb to the top rope, but ODB shoves her off and eliminates the the perky plaid female. All four women in the ring quickly take down the early favorite, as ODB is then soon tossed out as well. Gail and Madison taunt ODB, as Tara, Sarita, Velvet, and Angelina remain the only Knockouts left in the bout. Tara tosses Sarita into the corner, but Sarita lifts Tara up over the top rope and she falls to the ring apron. Angelina Love quickly dropkicks Tara out of the ring, thus eliminating her from the action.

Gail and Madison laugh at Tara’s misfortune, as a huge “Let’s Go Velvet” chant breaks out and the plucky underdog tries to double team both Sarita and Angelina. Sarita sends Velvet off the ropes, but she comes back with a clothesline until Love takes her down. The two go for a double clothesline, but Sky ducks and comes back with one of her own. She tries to eliminate Angelina, but Sarita stops it and blasts Sky’s face into the corner. Both ladies choke her out using their boot, as we finally get a brief return of Sarita’s dancing!

She applies a headlock, as TNA tries to plug a new show during what they know will likely be the highest rated segment of the night (smart). Sky finally starts to fight back, attempting to eliminate Sarita, who uses her ankle to save herself (amazing). Angelina goes for Velvet to a chorus of boos, but Sarita starts going for Angelina! The two struggle to work together, but ultimately comply with a elbow to the face to the delight of Gail and Madison. Angelina then connects with a huge Botox Injection to the face of Velvet (read that again). Love tries to toss Velvet over, but Sarita quickly eliminates Angelina! The dancing continues on, as Sarita scores with a dropkick. She then goes for a running move, but Velvet pulls the top rope down and eliminates her! Suddenly, Madison Rayne then runs in and throws Sky out, winning the match for herself by god!

Also, check out the return of former valet, Chelsea in a segment with Immortal:

Thoughts: I loved everything about this battle royal! Normally they can be a little messy at times, but all of the eliminations served a purpose, and the final three showdown was phenomenal since the crowd worships the ground Velvet Sky walks on. I was pulling for Sarita to take the victory, but the fact she made it as far as she did hopefully means TNA see what everyone else does in her. The ending was extremely brilliant in my opinion, by having Madison proclaim earlier that “anyone in the ring is eligible to become Knockouts Champion”, and then scouting the entire match at ringside, before charging in and winning it herself. If the show wasn’t taped earlier, I honestly would’ve never seen it coming and I think everyone played their part well. I’m looking forward to where Gail and Madison take this, because I don’t want either to turn face in all honesty. Perhaps throw Velvet into the feud for a triple threat? I’m not quite sure, but what I am sure of is that I’m off to go watch the Cougar Town season premiere again, as I await all future episodes to come Tuesdays on ABC at 8:30/7:30 central!