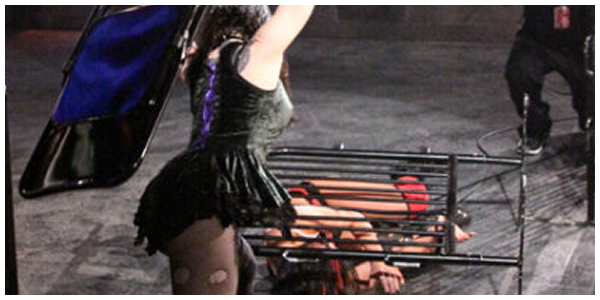 It’s no secret that the majority of us have a love/hate relationship with TNA and all things about it. It’s easy to bash the company and it’s management, and to be honest, it’s one of my hobbies these days it seems. It’s not that I do it intentionally, because I don’t. I really want to like TNA and I want to seem them push the envelope and elevate their product towards the top so they can compete with the WWE and force the ‘E to raise its quality. Sometimes I think it’s wishful thinking, but nonetheless here I am with another Impact Write-Up and this week it’s going to be a pretty happy one. The TNA love came into play tonight when the company finally gave us some diversity and featured *gasp* Daffney. With the whole Beautiful People/Angelina Love soap opera we’ve watched play out over the past few weeks, Daffney was seemingly one of the forgotten Knockouts who got stuck playing second fiddle to the pretty people of the company. On this week’s Impact, she took on Knockouts Champion, Tara!

Daffney is the first competitor to make her way to the ring for this non-title match up. Taz makes a comment about how nice it is to see zombie-hot Daffney and I totally agree with him. Daffney has one of the better female characters in all of wrestling right now and she has years and years of experience behind her as well. With the exception of the hat she’s wearing, her outfit is totally fabulous. I absolutely love it. She looks amazing. Tara is out next and she looks cute tonight as well. Her body is completely ripped and she can pull off the beanie, T-shirt, and little shorts look so well. Tara has certainly started looking better as she’s gotten older which is a true testament to her amazing workout routine and the fact TNA has seemingly given her a new lease on life.

The match begins with both women jockeying for position. Daffney forces Tara back against the ropes and takes a wild swing at her, but the crafty champion ducks and just totally floors Daffney with a huge right hand. Daffney hits the mat but she gets up, so Tara hits her again, and then a third time! Daffney doesn’t let this stop her, and she gets up once again. This time Tara slams her foot into Daffney’s gut, doubling over the gothic beauty. She shows off her strength and hoists Daffney onto her shoulders, then hits a nice looking slam. Tara goes for the cover and gets a two count. Tara’s not really happy about that and she lifts Daffney up and goes to work on the other woman’s arm. Daffney defends against this and hits Tara with a knee to the stomach, then a huge uppercut. Tara staggers back against the ropes, get chest chopped, and when Daffney goes for the whip, Tara is able to reverse it and send Daffney across the ring. Daffney bounces off the ropes, ducks a clothesline, and comes flying back at Tara. Tara is ready for this and lifts Daffney up, back body dropping her with ease.

Daffney grips her lower back in pain and Tara starts to rally the crowd behind her. How does she do this? By being a diva of course and ripping her shirt off! At least there’s another top under her wrestling shirt this week, so we’re not subjected to any wardrobe malfunctions. Daffney has been recovering in a corner throughout all this and when Tara goes after her, Daffney unleashes a spinning heel kick that no doubt catches the Californian off guard. Tara goes down like a ton of bricks but Daffney is to hurt to go at her right away. Tara manages to slowly get to her feet and Daffney has enough instincts to go after her and make her stay down. This seems to give Daffney a bit of a second wind and she suddenly starts to remember why she’s such a sadistic you know what! She repeatedly snapmares Tara to the mat using only the woman’s hair (… and for you tender headed people out there that’s pretty cringe worthy). To make matters worse, Daffney has began taunting Tara and the referee for that matter, and she kicks Tara right in the chest. Daffney continues kicking the crap out of her opponent and finally just pushes her right out of the ring.

Daffney gives an evil little laugh into the camera and slams Tara into the steel guardrail. But you know, Tara is champion for a reason and she starts fighting back. Daffney crawls away from her and reaches under the ring  for a weapon. She manages to find a strategically placed tool box and just knocks the snot out of Tara with it. Of course that’s an automatic disqualification but does Daffney care? Of course not! This woman is certifiably crazy and I’m absolutely loving this. She beats Tara with the toolbox again and begins to drag the champion away from the ring. The referee, bless him, is following behind them and trying to make Daffney stop, but she has other plans. She tosses Tara into the steel railing and when the referee finally tries to assert himself, Daffney lets out an ear piercing shriek that stops him dead in his tracks. His face is totally priceless and I’m laughing everytime I see it because I have Impact on pause right now. The camera switches to Tara and the sheer agony of Daffney’s maniac attack is written all over her face. She’s gingerly walking and trying to get away, but she’s basically just a wounded piece of prey right now. Daffney pounces on her and knocks her down with a double axe handle. The bell rings again which is so pointless and so funny, especially because Daffney just doesn’t care. She throws a piece of the barricade across Tara, screams at everyone to get out of her way, and grabs a chair.

Then in perhaps one of the most beautiful moments I’ve seen on television in a very long time, Daffney takes the chair and starts beating the guardrail with Tara trapped underneath it. Tara is twitching, moaning, groaning… it’s just fantastic. Dr. Stevie finally runs out and tries to get a hold on Daffney but man does she put up one hell of a fight against him. It’s pretty amazing to watch Daffney flip the ‘eff out and even while Dr. Stevie drags her away, Daffney screams and fights. Tara’s out cold and everyone is checking on, and unfortunately Impact decides to cut away and go to Mick Foley thus ending our Knockout entertainment for this evening.

I for one was extremely happy with Impact tonight. I think they made up for snubbing the Knockouts this past Sunday and both Daffney and Tara really brought it tonight. After weeks of seeing nothing but the Beautiful People and Angelina Love, this was a much needed break for me. I love TBP and Angelina, but they were shoved down our throats far to much and the angle got so boring and stale to me. What we saw on this week’s Impact really put Lacey’s moonsault elbow drop to shame. Impact definitely gets two manicured thumbs up from me. I’m excited about the potential this Daffney/Tara storyline has and I hope that TNA can broaden it’s horizons and actually go all in on this one. I would love to see more Knockouts featured, but I’m not going to complain. We got to see a new, fresh face tonight and at the end of the day, that’s what truly matters. Did anyone else enjoy the fact Dr. Stevie got Daffney away from Tara? It made me flashback to a much happier time in wrestling when Victoria and Stevie Richards were a couple, LOL. I hope there will be some Stevie/Tara interaction somewhere down the line!

I can honestly say that for the first time in a long time I’m excited to see what next week’s Impact will feature. I don’t read spoilers for these tapings because I like everything to be fresh and new for me. Daffney was a welcomed distraction from all the Mean Girl-esque BS we’ve had to deal with lately and for someone who’s never really been impressed with Daffney, tonight I can say with a smile on my face that I marked out for her and maybe, just maybe I became a bit of a fan.