Impact Write-Up (February 23rd, 2012): Gail Takes Down ODB, But is Madison About to Rayne on Her Parade? 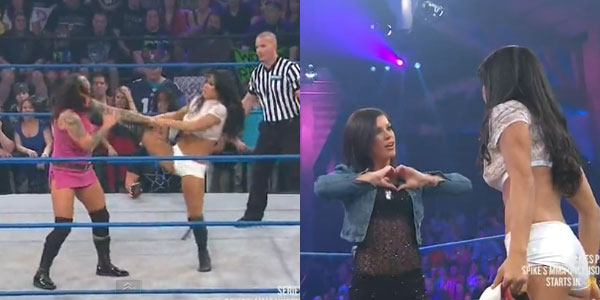 Why hello there, and welcome to your final Impact Write-Up that will ever take place… in February of 2012 that is. I actually have not seen the show yet, so you’ll be getting my live reactions to all the happenings of our Knockouts. What I do know though, is that Knockouts Champion, Gail Kim, took the fight to ODB in a non-title match that I’m sure will be nothing sort of tremazing (tremendous and amazing). I wish I could say more, but until this recap begins, that’s where my knowledge ends, so let’s make this a lot less painful and just scroll on so we can get down to business.

First up, we head backstage to see Madison Rayne, our new number one contender, giving her thoughts on Sting’s recent tweet saying he’s “done”. She claims that she hopes it’s true since he’s not been fair to either she or Gail, but speaking of Kim, Rayne states she only did what she did because she didn’t feel that a fighting champion such as Gail should have to face the other competition. Madison inserts that she will provide Gail with the competition that she deserves, and that’s all there is to it!

We head out to the arena, where ODB and… ugh, her friend that’s a boy make their way to the ring. After some posing, the STILL addictive music of Gail Kim hits, and here comes our classy Knockouts Champion in white. Gail executes her a-mah-zing ring pose, before making the same expression as Creepo Beard as I currently am. ODB takes a sip of the flask, before the bell sounds and we get underway. The crowd begins to chant for ODB, and Gail starts to scream at her. ODB hilariously chest bumps the Knockouts Champ back and pats her own booty before dropping Gail to the canvas and slapping hers!

While ODB keeps a hold locked in, Gail manages to slam her into the corner. ODB with an Irish whip as Mike Tenay, for some reason God only knows, begins to discuss Rihanna and Chris Brown like he wants to come off as hip to the current news. Once my attention gets back to the match from that random distraction, Gail is sitting in the corner holding her stomach and ODB is patting her lady parts!~ Suddenly, she runs forward and bronco busters’ Gail. Roll up for a two count as Gail kicks out and does her best to avoid the annoyance at ringside… such a trooper she is.

Kim takes advantage with a series of uppercuts, but ODB connects with the fallaway slam into a kip up after Gail’s failed crossbody attempt. She tries to drag Gail to the center of the ring, but Gail holds onto the ropes and proceeds to kick ODB in the shoulder. Kim continues to take control, following up with a clothesline for a near fall. ODB with a few forearms to the stomach, but Gail maintains the nice advantage with her impressive face-plant off the ropes as I beg someone to give this bearded person a sedative. Gail scores with her shoulder tackle through the ropes in the corner, before slamming ODB down and covering for a near fall. ODB finally fights out, but Gail proceeds to lock in the Flying Dragon submission hold until ODB drops her with a sidewalk slam.

Gail scores with a big clothesline that looks to demolish ODB, before dragging the One Dirty Broad into the corner and choking her with her boot. Suddenly, her attention turns to the ramp, where Madison Rayne walks down! Gail asks what she’s doing here, but Rayne tells her to not worry about it. ODB then gets some liquid courage from the flask, before mounting a comeback against Gail with a few shoulder tackles and a clothesline. ODB is then sent into the corner, but comes back with a boot and pounds Gail’s head into the corner with the Dirty Dozen! She follows it up with a Thesz Press for a two count, before lifting Gail up for the BAM finisher but Gail counters into the Eat Defeat for the win! Madison snatches the title and shoves the referee away, choosing to celebrate with Gail instead!

Thoughts: A fun match between ODB and Gail. I loved that they didn’t let Eric’s constant annoying interference take away from the match at all, most of the time completely ignoring that it was even happening. I don’t mind if he does backstage segments, but if you’re going to stand ringside, you shouldn’t do everything in your power to take away from the match, you should try to get people more into it. I’m sure it’s common knowledge that I don’t care for him, but it gets so annoying having him just run into the ring every five seconds. It’s not that he does it, it’s the amount of times it happens. Once would be tolerable, but like I said, I love that the two didn’t seem to get phased by it and put on a very solid match. I’d love to see another without said person ringside.

I’m also getting pretty excited to see Madison and Gail collide with one another. Personally hoping they drop the Tag Titles before then because TNT, Winter/Angelina, or Mexican America could all be using those belts to get back on TV and I don’t like seeing them just being props so to speak.