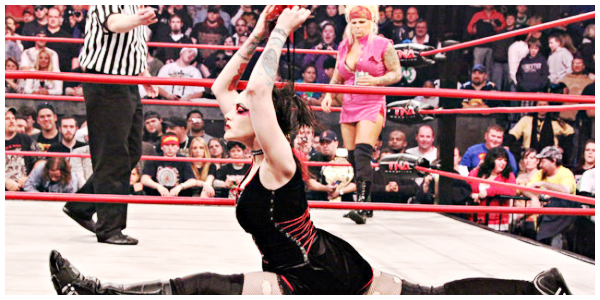 On last week’s Impact we got the start of a potential feud between the crazy, off-the-wall Daffney, and TNA Knockouts Champion, Tara. This week, that upcoming feud was acknowledged and Daffney was in action yet again as she took on former Knockouts Champion, ODB. With two unique and alternative wrestling personalities clashing in the ring, memorable moments were sure to be made. Did these two ladies deliver? Well keep reading to find out!

ODB is out first wearing a small pink dress and clashing red underwear. Her hair is a very vibrant blonde and she just totally kills me. I don’t even know if it’s in a good way anymore. “Zombie Hot” is out next and I approve of her sexy ring entrance. These two women don’t really screw around and that’s super great. Daffney tries to drive ODB back into the ring post but ODB gets the heck out of dodge and Daffney ends up driving her own shoulder into the post instead. ODB with her flask still in her hand, smacks Daffney on the bum and then turns her around and lays a vicious chop to the goth queen’s chest. She throws Daff across the ring and smacks her in the chest again. Pretty nice start for ODB and she capitalizes by slinging Daffney head first into a turnbuckle.

Now things are about to get confusing and I’m bothered. TNA decides to split the screen while simultaneously having Tara cut a promo. What this does is completely take away from the action in the ring. I’m all about giving Knockouts mic time, but was it really necessary to have this going on while the match was? Couldn’t Tara cut her promo before or after the match? Why couldn’t she just get involved? Why were we forced to pick between the match on the left side of the screen or the promo on the right side of the screen? I know I shouldn’t be bothered by little things like a split screen of a match and a promo but good grief. Would it have killed TNA to cut the time of one of their other 9572035879203987420948 segments in order to give the Knockouts separate segments? It probably would have to be fair because this is the company who doesn’t believe in elevating young talent and has turned itself into a retirement home, while giving the WWE free publicity all at the same time with their squabbles over Hogan’s Hall of Fame ring.

Now lets get back to the match. I’ll review Tara’s promo in a little bit. ODB continues working over Daffney, dragging her from post to post. She finally gets her back into the corner they started in. ODB backs up and looks to charge at Daffney, but TNA’s resident crazy is ready for her and catches the former Knockouts Champ with an elbow to the chest. She follows it up by taking out the knee of ODB and the pink dress wearing KO falls to the ground. Daffney looks really disturbed and starts working over ODB’s leg. She softens her up by viciously kicking her in the back of the thigh a few times, then she takes the same leg and slams the other woman’s knee into the canvas. This begins a terrible assault which sees Daffney looking to injure ODB. She pulls the blonde partially out of the ring and continues to beat on that left knee. Daffney slams the leg on the edge of the ring and ODB is crying in pain. Daffney goes for more offense but ODB manages to knock her down with her good leg but it only last for a hot second. And it only annoys Daffney further. Daffney bounces back to her feet and starts wailing on that left knee again from outside of the ring. ODB ends up in a position where she’s semi-straddling the ring post so of course she ends up with her already injured limb slammed into the steel a few times.

That seems to do it for ODB but Daffney is far from finished. She rips down the kneepad of ODB and slams the exposed patella into the post. I cringed because it just looked painful and ODB’s selling is magnificent. Daffney goes under the ring and pulls out a steel ring step which she sloppily slams into ODB and then she grabs a broom looking thing. The poor referee tries to stop her but Daffney goes wild on him and violently screams for him to leave her alone. Needless to say, he does. Daffney then goes nuts and begins to beat ODB over and over with the broom. This was pretty meh because it was clear she wasn’t hitting ODB. She hit the ring step and the post, but I understand that you can’t really beat someone with a broom unless you want their injury to be non-kayfabe. Daffney does actually strike ODB’s leg legitimately once, but I’m hoping it was just an accident, kind of like a caught up in the moment type of thing. Either way, it’s great acting by these two ladies. For the second week in a row, Dr. Stevie has to wrestle Daffney away from her opponent and this time she fights him so hard he ends up taking her down to the ground. I would have loved to see more but the segment is immediately cut to the backstage area where I got a glimpse of Matt Morgan in a really hot T-shirt. That’s not something I can complain about.

Now as far as Tara’s promo goes, it was really good. The champion has some solid mic skills and I really loved what she had to say about Daffney. Tara admitted that she probably didn’t take Daffney as seriously as she should have last week, and she had the wounds to prove it. She claimed she knew how crazy Daffney was and if Daffney wanted to get her attention she certainly did just that. Tara put over how ruthless, dangerous, and violent Daffney is which I think is great. Really good promos are the ones that can get both workers over and Tara’s delivery of her lines make us, the fans, feel that she really sees Daffney as a huge threat to her championship as well as the entire Knockouts division. Christy brings up the fact that in the light of last week’s events, a rumor was going around that Daffney wanted the Knockouts Championship. Tara agrees with that and says that if Daffney wants to face her in the ring again, she will be ready. Then she adds that while she may have not heard the last from Daffney, that Daffney DEFINITELY hasn’t heard the last from her.

I can hardly complain about the length of the match when basically all of Impact was booked like this. The show last night involved very little wrestling and a whole lot of shenanigans. I really hate the fact the Knockout match and Tara interview had to overlap each other even if they were for the same storyline. It should have been separated. You couldn’t really focus on each of them, at least I know I couldn’t. I had to watch the match twice, once for the actual match and once for the interview. Daffney’s push is progressing very nicely and I’ll be honest, I wasn’t a fan of hers before. It may stem from my jealously over the fact she got to work with CM Punk in the past, lol, but regardless I’ve never really paid her much attention. She’s definitely made me open my eyes and take notice. Her character is just flawless and I’m dying for some type of hardcore, bloodfest between her and Tara. I’m very excited to see what happens between the two of these women in the upcoming weeks and I hope we get a PPV match this month. I follow both of these women on Twitter as well and their interaction on the social networking device has been great. Overall, the Knockout portion of Impact delivered tonight. It did what it needed to do and left me wanting more.

Did it leave you wanting more?