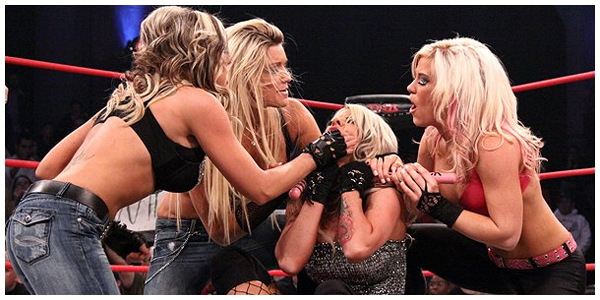 I suppose I should begin this by introducing myself. My name is Cryssi and I’m Diva Dirt‘s new TNA correspondent. It’s an honor to be here and I promise to bring my best each and every week with whatever I do here! I’m excited for this job. Part of the excitement stems from the fact I’ve been thrust into the middle of a train wreck of a show. TNA is a soap opera of revolving doors, pointless drama, and politics. At least that’s how I view it. With the departure of Alissa Flash and Awesome Kong‘s request for her release, we’re left with some questions about the Knockouts division. None of them were answered on this week’s episode of Impact and we likely won’t know much until TNA returns for more tapings. Tara was absent from this show, as were Knockout Tag Champs, Awesome Kong and Hamada. The Beautiful People and Angelina Love were the only entertainment for us Knockout fans. So with all that being said, lets get on with my first ever Impact Write-Up!

We’re treated to a backstage shot of Angelina getting mentally ready for her match but that’s not all fans. We get a video package too! The history of Angelina’s break-up with the Beautiful People is rehashed, and I’m not going to lie; I still laugh whenever I see her beat the crap out of Velvet Sky. It’s hilarious. Madison Rayne comes out first and she doesn’t look half bad tonight. She’s improving week after week and her antics toward the crowd were pretty funny. I loved when she booed the fan that was booing her, and her overall attitude was great and spot on. She does her posing with the ropes and on the turnbuckles, and it surprised me to see that she came out sans Velvet and Lacey von Erich. Angelina comes out next, to her new music, and gets a hot face reaction. The crowd seemed really excited to see her and rightfully so. She’s one of the few women left in TNA now who can actually put on an amazing, legit match.

The bell rings and Angelina goes after Madison. The referee tries to stop it seeing as how Madison is backed into the corner, and to her credit Angelina backs off. Madison uses Angelina’s sportsmanship to her advantage and goes right after her former leader. She hits a few nice punches and gets Angelina to the mat. The Canadian does her best to defend herself, but Madison doesn’t really let up until she (Madison) gets back to her feet. Angelina is up as well and is met with a few stiff forearms to her jaw, then finds herself pressed against the ropes. Madison whips Angelina to the other side, but momentum switches and Angelina slams Madison down to the mat by her hair!

With Madison down, Angelina takes charge. She mounts her and begins to unleash her angst on her former lackey. Madison takes the abuse and then gets thrown into the corner. Okay, she doesn’t get thrown. Her face eats a mouthful of turnbuckle and it looks like it really hurts. Madison stumbles to the left and is “helped” to her feet by Angelina. Angelina goes for a whip, Madison reverses it, Angelina ducks a clotheslines, and Madison gets absolutely destroyed by a sick bicycle kick! Angelina goes for an arrogant cover and gets the victory.

We’re not done, however. Angelina decides to celebrate her victory by ripping Madison’s top off and choking the girl with it. Cue Velvet and Lacey von Erich. Lacey is carrying the ugly stick in her hand but Angelina doesn’t seem to care. She kicks the von Erich spawn in her stomach and Lacey goes down like dead weight. Madison is back up, but Angelina takes care of her as well. LVE goes down again and Velvet starts sneaking up behind Angelina with the stick. Angelina whirls around and the former BFFs are looking each other in the face. It’s a totally not intense stare-down because Velvet looks like she wants to cry (… perhaps from the fact she’s stuck with Lacey now?) and Angelina just looks pissed. The distraction from Velvet allows Madison to recover and take down Angelina from behind. Lacey finally gets to beat Angelina with the ugly stick and a three-on-one beat down ensues. Lacey and Madison lock the stick against Angelina’s throat and hold her up for Velvet. Velvet berates ex-bestie and bitch slaps her across the face. TBP bitch some more, then raise each other’s hands in mock victory, and finally our segment ends with Velvet shrieking at the camera not to mess with the Beautiful People.

Oh boy… where do I even start? The length of the match is scary. At first, I thought I was watching Raw or SmackDown. Since when do the Knockouts perform in three minute matches? I really, really, REALLY hope this is not the way the Knockouts division is going to be handled from now on but I have a feeling it is. It’s going to focus on the Beautiful People and the other girls are going to get lost in the shuffle. Hogan and Bischoff running things is a complete and total disaster. We’ve all been following the drama this week and it’s probably only going to get worse. I hate to sound so negative in my first Write-Up, but it’s been a tough week for Knockouts. Awesome Kong and Alissa Flash were huge assets to the division and now both of them could be gone.

I had wanted to see Alissa step up and challenge Tara, but that’s not gunna happen. One of the Beautiful People will probably get the challenger spot now, and I pray it’s not Lacey. If TNA has to go this route, then Angelina should get herself involved and perhaps it can lead to a three-way for the Knockouts Championship somewhere down the road. I’m not going to get into a huge, analytical discussion of the way storylines should go because to be honest, I’m still in shock from the short match. The Knockouts deserve better than what they got and I really hope they don’t end up getting treated like the Divas do in the WWE.