Impact Write-Up (July 22nd, 2010): Confusion Reigns Supreme But Not On Our Part For A Change 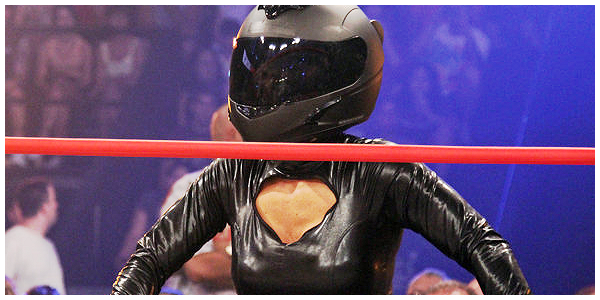 Last week on Impact, the Knockouts took an unexpected, yet welcomed step in the right direction in terms of their booking. Whoever wrote the show or whatever gave all of us long suffering KO fans a well deserved treat in the form of a brilliantly scripted and well acted in-ring segment and a pretty darn good streetfight. Personally, it was almost to much for me to handle you know what I’m sayin’? This week, the action wasn’t overwhelming but it was still great, and very enjoyable to watch.

Tonight’s Knockout portion of Impact kicks off with a segment featuring Madison Rayne, Sarita, Velvet Sky, and Lacey Von Erich. Sarita and Madison are hanging out in the women’s lockerroom and they’re gossiping. Eventually the subject gets switched to Velvet, and Madison starts to run her mouth unaware that Velvet and Lacey have both walked up behind her. Lacey attempts to cover Velvet’s ears so she can’t hear the mean things Madison is saying, but it fails and Sarita goes quiet. Madison wants to know what’s going on and of course, Velvet is standing behind her when she turns around. Lacey begs them to stop, but Velvet’s not having that and she looks down her nose at Madison. She tells Madison that if she has something to say then she better say it to her face. Sarita is in the background smirking, but Velvet calls her out next. She basically accuses Sarita of being the mystery biker chick and tells her that she should keep the helmet on her big ass head. Bitching ensues and once again, Lacey tries to break it up. Both Madison and Velvet snap at Lacey like she’s a five year old, and then Madison gets all cocky, saying that tonight she is going to be handed back her TNA Knockouts Championship. Velvet just rolls her eyes and mentions that she still has her title because she never lost it. Both girls try and buck up to one another, and poor Lacey. She’s just stuck in the middle of all of this and getting treated like crap. Sarita and Madison both walk away, and Velvet and Lacey go off in the opposite direction. TNA goes to commercial.

After a bit of pointless crap, Angelina Love and Taylor Wilde make their way to the ring. Angelina is still wearing the Knockouts Championship but that’s about to change. The Beautiful People music hits and Sarita walks out with Madison. Sarita and Taylor are jawing back and forth at one another during the entire entrance  and Madison is literally bouncing to the ring with a bright smile on her face. Once all that is finished, senior referee, Earl Hebner, stands in the middle of the ring with a microphone in his hand. He informs Angelina, as well as the crowd, that the Board of Directors have no proof that a member of the Beautiful People was riding that bike therefore Angelina has to surrender the championship. Madison starts demanding that she be handed the belt, but after Angelina passes it off she cold cocks Madison right in the kisser. Taylor attacks Sarita and the fight between these four talented ladies is underway!

The bell rings, but things are ridiculously out of hand. Sarita ends up getting thrown out of the ring at one point which leaves Madison prone to a double team inside the ring. Taylor is forced out of the ring and into her corner, while Angelina takes down Madison. Sarita is back up on the apron so Madison is able to make the tag. Angelina controls the limited offense and then begins to drag Sarita towards a waiting Taylor Wilde. Sarita is able to shake free, but Taylor has already come into the ring. Sarita’s not really one to back down from a fight so she kindly greets Taylor with an innovative take down. Sarita taunts Taylor, which prompts the blonde Canadian to fight back stiffly. Sarita’s not really game for this type of onslaught and she eventually ends up on the mat.

Sarita finally figures out that she needs to get in some offense, so she manages to catch Taylor off guard and send her spinning into the mat. Taylor rolls over towards her corner to make the tag to Angeline, and meanwhile, Sarita has gotten to Madison. Madison comes running in, but quickly reverses her position once she sees Angelina coming at her full steam ahead. Madison doesn’t make it in time to her corner, but it doesn’t matter anyway. Sarita’s not even on her feet. Angelina takes her foe down a couple of times before finally just slamming her. Sarita comes in the ring to break it up and Taylor decides to assert herself into the melee. She jumps Sarita and the two fall down and begin to brawl. Their fight spills out of the ring right as Madison attempts to hit Angelina with her finisher. Angelina is able to put a stop to that and she knocks Madison out for the three count thanks to a fancy little inverted face plant thing.

Taylor brushes off Sarita and gets back in the ring, just in time to congratulate Angelina on picking up the victory for their team. While that’s going on, the biker babe comes driving down to the ring. That completely overrides Velvet’s theory of Sarita being the woman on the bike. The confused Tag Team Champions make their way to the ring which leaves Angelina and Taylor even more perplexed. The distraction allows Madison and Sarita to jump them from behind. The biker chick gets in the ring and goes right for Angelina. This allows Velvet and Lacey to plaster on their confused expressions. Eventually the biker woman gets out of the ring, and So Cal Val hands the Knockouts Championship back over to Madison. Sarita and Madison get out of the ring and head for their mysterious friend, and much to Velvet’s horror, Lacey runs off and goes with them! To be perfectly fair, Lacey looks torn in half over the situation and she does her best to get Velvet to join them. Velvet’s not having it and finally Lacey, Sarita, Madison, and the mystery woman just leave. Velvet shakes her head and looks in the ring where her eyes lock with Angelina’s. The two literally look like they’re having a silent conversation and the looks on their faces say it all. Neither one of them know what their next move is going to be.

The Good: I often gripe about combining storylines, but this one worked because it wasn’t hastily thrown together and everything actually made sense (for the most part). I don’t really feel like picking apart the little things because really, it gets us nowhere. I’m pleased with Madison getting the championship back and I truly hope that next time we see the Knockouts Championship change hands its at the conclusion of a hard-fought match with a fair ending. It’s time TNA started to bring some prestige back to the belt.

For the second week in a row, I feel like everyone shined. Each girl played their part well. Lacey is becoming quite the little actress and I’m loving her role in all of this even more so than Velvet’s. It’s so interesting and intriguing to me to see Velvet Sky play the victim. I loved the silent exchange between Angelina and Velvet this week. I can’t help but feel and hope that a reunion, even if it’s short-lived, takes place soon. They both have a common annoyance now and that’s Madison Rayne and her massive ego. I feel like it’s only a matter of time before they join forces to try and stop her.

The Bad: I felt the match was slow and sloppy in some places. Taylor and Sarita seemed unsure of where to go next at a few parts. I don’t know if it was miscommunication or if they simply didn’t have the timing down. Either way, there were a few spots in there that seemed weird to me.

The Ugly: Sarita and Taylor continue to dress funky. I know wrestling is not a quote “fashion show” but neither are the Academy Awards, Golden Globes, ect. and we still comment on the dresses worn on the red carpet. I’ll never understand the Beautiful People fashion sense either, but I’ve given up on them. We know that they’ll always dress bad, but for once they looked presentable. At least I thought Velvet did in her little yellow dress.

Tonight was the second week in a row of good Knockout action. I didn’t enjoy it as much as last week, but I’ll chalk that up to the funny spots in the match. I’m really just grasping at straws though. Everyone played their part well, once again, and I hope next week goes over just as well. I haven’t read spoilers and honestly,  I don’t even know if anything has been taped. I just want this fun run for the Knockouts to continue. God knows they deserve it after wasting away in purgatory for the longest time.

Author’s Note: At the time of posting, no video was available for the match. Once a video is location, it will be added.