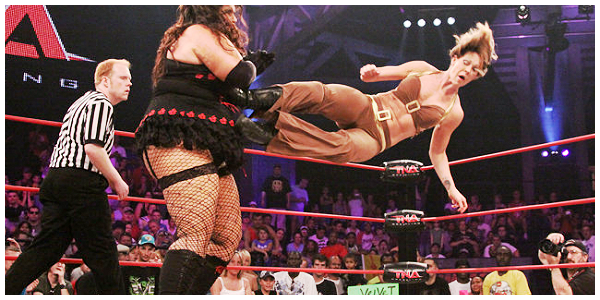 Today’s Impact Write-Up is brought to you with a heavy heart and a rather somber approach. Last night, my precious kitty, Tygrr, succumbed to the afterlife after a very brave fight. She wasn’t but six weeks, but I was attached, and sadly she’s no longer with me. As sad as I am about her passing, it’s a relief to not have to watch her suffer any longer. This Write-Up is dedicated to my little baby and like the great Freddy Mercury once sang, “The show must go on.”

It did go on last night and in a big way, no pun intended of course. TNA saw the debut of a new Knockout; one who’s hiring was rather controversial in the first place. Rosie Lottalove made her first televised appearance against the number one contender to the Knockouts Championship, Roxxi. I’m pretty sure none of us looked at this match on paper (or computer screen) and expected an instant classic. Personally, I can’t believe someone who brutally injured another Knockout got a job but it is what it is (still my favorite saying). Rosie was the first woman to make her way to the ring and good lord. Words don’t even begin to do her outfit justice so I’m not even going to try. She’s certainly got a sparkling personality. I love the way she was announced too.

Instead of focusing on Rosie’s ring entrance, TNA showed their class by highlighting Rosie’s tryout match against Daffney. You can bet that alone is going to make my “Ugly” section because a lot of rude things are coming to mind right now. Maybe I’ll calm down before I get to the ranting part of this column. Nonetheless, the video package gives Taz the opportunity to put Rosie over by saying Daffney is now on the injured reserved list and that’s why we haven’t seen her in quite some time.

Question: Taz, why haven’t we seen ODB and Hamada in “quite some time”?

If you ever read the Write-Up out loud and like a promo, you should totally do a cheeky little grin after questioning Taz. I’m just sayin’. After TNA concludes their exploitation of Daffney’s misfortune, we’re treated to a shot of Rosie’s backside while she enters the ring in Beautiful People fashion. Taz makes the usual fat jokes, which are stupid and predictable but he’s a man so we let it slide, and the camera pans around the crowd. People seem slightly horrified/shocked/intrigued by this new girl. With Rosie’s introduction finally finished, Roxxi’s generic theme song hits and she makes her way to the ring. She’s in the disgusting brown outfit again which is more distracting to me than Rosie’s ridiculous blue eyeshadow and bright red lipstick. Roxxi does her thing and once the bell rings, a chant for the popular Knockout begins. The “Roxxi” chant eventually breaks into something else, which I can’t really distinguish, and both women begin to circle one another.

Roxxi is the first one to try and control the match. She grabs Rosie in a headlock but this basically does nothing. Roxxi ends up against the ropes but when she tries to fly at Rosie, she’s the one who ends up on the ground. Roxxi gets back up but Rosie just slaps her down again. It’s kind of sad, really. Rosie follows that up by body slamming Roxxi down and she’s hurting. Rosie whips Roxxi into the corner and begins playing to the crowd. She flips her hair, slaps her butt, and gets ready to run at Roxxi. I’m sure Roxxi sees her life flash before her eyes and that gives her all the motivation she needs to move the heck out of the way. Rosie slams into the turnbuckle back first and Roxxi begins hitting her opponent in the face. Roxxi is still unable to knock Rosie off her vertical base so Roxxi tries for a dropkick. That’s a big epic fail as well, but at least the giant is stumbling around now.

Roxxi goes to bounce off the ropes but out of nowhere, Madison Rayne pops up, and nails Roxxi in the back with the Knockouts Championship belt. She starts screaming at Rosie to “get her” but Rosie looks a bit befuddled. She starts screaming at Madison Rayne, clearly confused as to what’s going on, but finally she turns around and goes to kill Roxxi… Daffney style. Roxxi is pretty savvy and she quickly rolls Rosie into a small package. The one… two… three is counted and Roxxi has pulled off the win. Madison climbs into the ring and looks like a small child next to Rosie might I add. But size doesn’t matter to the champion and she begins berating Rosie for not utilizing the opportunity to win that Madison handed her on a silver platter. Madison is reading Rosie the riot act and starts slamming her finger into Rosie’s chest. Finally the new girl has had enough and she picks up Madison and lays her out with a choke slam.

Rosie walks up the ramp where Jeremy Borash is waiting for her. He wants to know what’s going on and why she laid out the TNA Knockouts Champion. Rosie is pissed and says that the Beautiful People like to walk out there and talk about how they’re going to rid TNA of one ugly person at a time. Rosie says that she’s big, she’s bad, and she’s certainly beautiful. As if her words weren’t enough, she has to jiggle her boobs as well which gets a reaction from the crowd that I’m sure she was going for. She declares that she’s going to take out every single one of the Beautiful People because she’s a whole lot of Rosie.

And then she kisses Jeremy Borash. That was certainly special.

Switching gears to the Weekly Chelsea Watch, Chelsea accompanied Abyss to the ring this week as he took place in the most random tag team match ever.

Abyss and “The Freak” Rob Terry teamed up to take on Orlando Jordan and Desmond Wolfe. At one point during the match, Orlando Jordan was tossed out of the ring and onto the floor, where he started to notice Chelsea. I’m sure we’ll agree that Chelsea isn’t Jordan’s type but he checks her out anyway and starts to touch her. Chelsea fires back with a nice looking slap and Desmond asserts himself into the equation demanding to know why Jordan decided to touch his woman. He then turns to Chelsea and questions why she decided to slap his partner. Then Desmond just gets confused and can’t figure who Orlando is actually interested in; him or Chelsea. It was kind of funny and Abyss and Terry end up winning.

The Good: Well the match itself wasn’t horrible. We didn’t really see enough of Rosie’s in-ring skills to judge her tonight. I don’t expect her to be technical or anything because she is a bigger girl. Bigger wrestlers have the size advantage and they can get away with simple moves such as suplexes, splashes, ect. Roxxi did well with what she had to work with. She bumped very well for Rosie and I don’t think the roll-up hurt this match at all. I find it hard to believe that Rosie couldn’t kick out, but how else would Roxxi get the pin? I don’t know how else they could have worked the match and I’m alright with what went down. It could have been better, but it could have been trainwreck. Honestly, I was expecting the latter so I was surprised.

Rosie was really good on the mic and like Kristin said on her show a few weeks ago, Rosie has a lot of charisma. I agree with that and Rosie definitely played her character well. Her little interview with Borash at the end was fun and the kiss at the end was great. I loved Taz saying the JB finally got lucky. I wouldn’t mind seeing more Rosie/JB interaction. It would certainly be different and kind of comical. I’m all for humor and TNA needs to inject some more life into it’s programming. If Lacey can get turned on by a midget, then Rosie can chase JB. Maybe she can take his virginity? Ha!

I enjoyed Madison’s interference as well. She did what a heel champ should do. She tried to screw her opponent over and mess with her head, but it backfired. I love that Madison is trying to act like the Queen Bee now and she looked great reading Rosie the riot act. Why wouldn’t the champ get in the new girl’s face? To Madison, Rosie is at the bottom of the TNA Knockout pecking order. She’s had one match, lost it despite the win being handed to her, and lets be honest. Madison probably doesn’t see Rosie as someone worthy of her time. But wasn’t it great to see Rosie correct Madison real quick? That modified chokeslam looked devastating and I have a feeling Rosie is going to be pushed pretty heavily. Getting one up on the champion the night of your debut is a pretty good intro into the company if you want my opinion.

The Bad: The Chelsea angle continues to be bad but at least it was injected with a little humor tonight. I’m glad Desmond stood up for Chelsea this week, but then he scolded her. It was funny to me because he was so confused at what was going on. I feel bad that he had to team with Orlando Jordan. So lets just leave it at that.

The Ugly: I’m still pretty furious that TNA decided to show Rosie injuring Daffney. It was just a tacky thing to do and it still baffles me that they hired Rosie after that. I know that’s unfair of me to say and yes, I am a Daffney fan. Maybe I’m not the best person to write about that. I guess I’m just confused that TNA felt like they needed to hire someone else when ODB and Hamada are sitting there doing nothing. We’ve only recently gotten a chance to see Taylor Wilde and Sarita again. If Rosie comes in and gets a push like I’m expecting her too, then chances of seeing other Knockouts are slim to none.

I don’t have anything personal against Rosie. I like that TNA is going outside the box and hiring people who aren’t skinny, blonde models. She seems to be someone who is good at comedy and I really do look forward to seeing her as the weeks progress. Only time will tell on how she fits into the picture, but I’ll make the prediction that after Slammiversary, we’ll be seeing Rosie getting pushed as the number one contender and Beautiful People fighter should Madison retain the championship, which I feel is a lock.

Overall, this wasn’t a totally horrible show. I stopped expecting TNA to do brilliant things. They seem content with dabbling in mediocrity so while they do that, they’ll continue to get mediocre reviews. Until next time my friends.