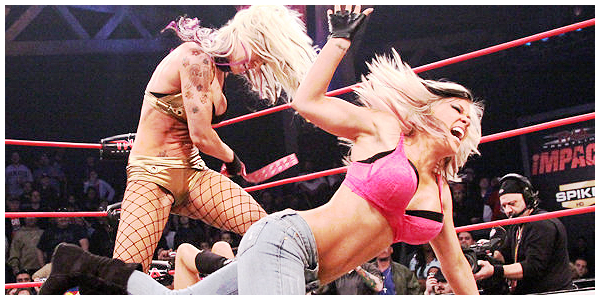 This week on Impact we were treated to a slight change of pace. Instead of more Tara/Daffney build-up we got a video package, backstage fight, and in-ring segment all featuring the Beautiful People and Miss Angelina Love. Ever since Angelina made her return to TNA, the Beautiful People have gone after full force and this week was no different. The backstage beatdown was pretty intense but what happened in the ring was even better. Lets get down to business.

The video package starts to play and it highlights everything that has happened between Angelina and TBP so far. We’ve already seen the highlights of all these incidents so they’re not really worth reviewing. Once the highlight reel is over, we’re told that earlier in the evening, Angelina Love was in a photoshoot that was interrupted by the Beautiful People. The Canadian Knockout starts swinging as soon as Madison Rayne and Lacey Von Erich arrive on the scene. Madison gets knocked back thanks to a stiff looking shot to her face and Lacey suffers the same fate. An official tries to hold Madison back but she shoves him to the ground and goes after Angelina. The two-on-one situation eventually overtakes Angelina and she’s forced into submission. Madison and Lacey beat the hell out of Angelina and throw her into a random steel barricade that is sitting backstage. Lacey grabs Angelina’s arm and pulls her through the railing, trapping her and leaving her as an easy piece of prey for Velvet Sky who finally gets in on this.

When Velvet shows up she has a hot pink belt in her hands. She starts screaming at Angelina like some kind of psycho and then begins whipping her. It’s pretty intense segment. Lacey tries to calm Velvet down and tells her “that’s enough” but Vel Vel’s not having that. She marches behind the barricade, gets right in Lacey’s face, and screams at her that “it’s only enough when I say it’s enough.” A meek Lacey can do nothing but agree with Velvet and Velvet gets in one last good, hard lick. She slams the belt down and declares “now it’s enough” and she stalks off in a fit of rage. Madison and Lacey gulp and stare at each other quickly before leaving the beaten Angelina down on the ground and hurrying off after their teammate.

Impact goes to commercial but when it returns Angelina is storming to the ring and she’s clearly pissed off. She demands that someone hand her a microphone and when they oblige her she orders Velvet to come to the ring. Angelina makes it known that she’s not going anywhere until Velvet gets her butt to the ring and the Beautiful People’s music starts to play. Velvet saunters out with a cocky little smirk etched across her lovely face and she’s proudly swinging the same belt she used to damage Angelina with. Angelina is not amused and finally leaves ring and goes right for Velvet. Velvet spazzes out and tries to run, but Angelina catches her and starts beating the tar out of her.

Velvet gets slammed into the ramp, kicked in the ribs, tossed into the barricades, and slammed into the ramp again. She ends up tweaking her knee which leaves her even more vulnerable to Angelina’s revenge beatdown. Before tossing Velvet into the ring, Angelina slams her into the steel once more just for good measure. Angelina helps Velvet to her feet and whips her across into the ropes. Velvet can do little to defend herself as she bounces off and gets hit in the face with a vicious kick. Velvet is sprawled out on the mat and in a considerable amount of pain. The camera cuts to some dramatic shots of the black and blue welts on Angelina’s back and rib area then we see the former Knockouts Champion grab the belt. It’s time for a little payback or is it?

Madison and Lacey finally come running out and Lacey has the ugly stick with her. Angelina whirls around and whips the belt across Madison, causing the young blonde to screech with pain. Lucky for Madison, Lacey saves her further hurt and humiliation and knocks Angelina in the back with the ugly stick. She begins stomping away on Angelina while Madison and Velvet get their bearings, then the other two join in on the fray. The three-on-one beatdown is pretty bad for Angelina because TBP are relentless. Things get worse for Angelina when Madison and Lacey stretch her out and pin her to the ground. Velvet starts beating her ex-best friend again and she shows no mercy this time. It’s difficult to watch and the crowd lets the Beautiful People have it once they’re done and start posing. The feud between Angelina and the Beautiful People has definitely been taken to the next level.

Well I would say that TNA did a nice job for their Knockouts on this week’s episode. I would have loved more Tara/Daffney shenanigans but notching this BP/Angelina feud to the next level right as we go to live shows was the right thing to do. I noticed a few things tonight. The first thing is that everyone involved in this segment was on their A game. Each lady was in full blown character mode tonight and no one looked lost. Velvet amped up her character’s level and for the first time I truly felt the hatred between all of these people. I really felt like Velvet was getting out all her frustrations with the way things went down between her and Angelina. Angelina was always the star of the Beautiful People and I think tonight is the first time we’ve really see how annoyed Velvet is with all of that. She’s always been pushed aside in favor of Angelina and jealously is a very powerful thing. Madison and Lacey were great back-up for Velvet tonight. They did their job perfectly and I actually liked it when Lacey got hesitant and tried to talk Velvet out of hurting Angelina further. I hope it’s foreshadowing something to come. I wouldn’t mind seeing both Lacey and Madison try and distance themselves from this Angelina/Velvet fiasco because they’re the ones taking the brunt of Angelina’s fury it seems.

As the last Thursday night Impact, I have to say I’m pleased. These girls really brought it tonight and they delivered in a big way. As sad as I was about the lack of Zombie Hot, I was more than pleased with we got tonight. I can’t wait to see what Monday brings us in the form of Knockouts and it’s even better that Monday is just a few days away.