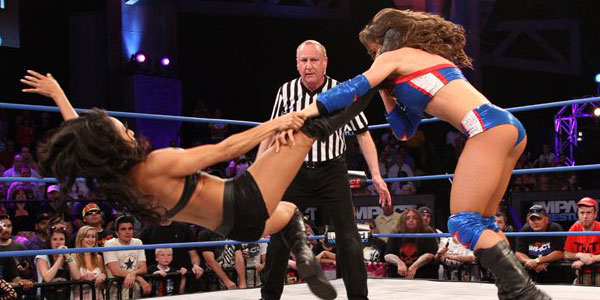 Salutations kind brethren, and welcome to the weekly one stop shop for all things TNA Knockout. If you’ve been following the program as closely as can be you would know that plucky, ever improving underdog, Brooke Tessmacher, has had champion, Gail Kim‘s number for the past few weeks. Whether it be matches involving four women, eight women, or just the two of them, Gail hasn’t managed to get the upper hand just yet.

Well, tonight’s show pits Brooke Tessmacher against Velvet Sky in a match that I’m kind of confused about. I don’t think they said anything regarding if Velvet were to win she would be placed in the match at Sacrifice, so I guess this is just some friendly competition. Aside from that, we also see Gail Kim and Madison Rayne in a brief backstage segment, and a SCANDAL (airing Thursdays at 10/9c on ABC *cough*) emerges involving TNA President, and one of my few Queens of Wrestling, Dixie Carter! Let’s waste no time and just get started!

Backstage we go to find Killer Kim and her friend Queen Rayne chatting backstage. Gail is NOT amused with the chatter going around regarding Brooke’s now three victories over the champ, and she believes they were just flukes. Kim claims that Brooke could never win when the title’s actually on the line, but Madison seems focused on finding something to wear. Hmm… Anyways, Gail continues on with her rant about people discussing how beautiful Brooke is, and how her booty… I mean body, is so stunning. Killer Kim states that all Brooke is is a bunch of camera tricks and Photoshop!

Madison once again interjects herself by asking if Gail thinks a pair of shorts are nice. Gail is absolutely not in the mood for this nonsense, so she questions what is going on with her BFF. Madison suddenly develops googly eyes and says that there’s a certain guy she wants to impress, but that’s all she can say right now. Gail shrugs it off and grabs her title, as she claims that she simply must run off to watch Brooke’s match. With that, the champion heads out and leaves Madison to instead focus on a black dress.

We then head out to ringside to the shot that I’m sure continues to send Taz into a frenzy… of course, referring to the pan up view of Christy Hemme who opted to not rock out in a pair of pants this week. The music of Pigeon Princess, Velvet Sky hits, and out skips the blond bombshell to perform her stage poses. Taz begins to become a bit flustered at the sight of Velvet’s bottom gyrating around, and this condition worsens when Miss Sky decides to LET THE PIGEONS LOOSE!~ I wonder if Taz is who convinced Vel Vel to go back to skirts…

And up next, the theme song that personally ranks in the top two of TNA for me breaks out, and here comes Tessmacher Talent in her patented oversize IMPACT shirt. Asstastic slides onto the ring apron and lets her hair back, before removing said shirt and stepping into the ring. Some poses in her Captain America gear soon follow, as the bell sounds and these two lock up. Sky backs Tessmacher into the corner and shakes her booty a bit, until Brooke does the exact same. BATTLE OF THE BOOTIES!~

Velvet applies a headlock and fires off a shoulder tackle for a one count. She then sends Tessmacher into the corner and hits a running fist. Velvet goes for a bulldog, but Brooke sends her into the turnbuckle and nails a nice monkey flip! She goes for another one, but Velvet simply shoves her off and goes for a cover for a near fall. Sky with a few kicks and chops, but then runs right into a dropkick! Brooke sets Velvet up and hits the trademark asstastic booty bump, but then misses a running reverse splash and gets dropped with a bulldog for a two.

The crowd tries to get behind Brooke, but Velvet continues the ambush with some kicks to the abdomen and a pair of jawbreakers. Sky hits a snapmare and proceeds to score with a basement dropkick for a near fall, but as she tries to continue on, Brooke gets a quick roll up for a close count! Velvet goes for the double underhook, but Tessmacher shoves her back into the corner! Sky runs forth looking for a move we aren’t sure of because the talented Tess moves out of the way and drop-toe-holds her opponent right into the turnbuckle post. Brooke then hoists Velvet into the air and nails her with the TESSHOCKER for the victory!

Her celebration is short lived though, as Gail Kim quickly runs out and ambushes her from behind. She awaits Tessmacher to get up, before dropping her with the Eat Defeat and taunting the challenger saying that she will NEVER be champion and is just a piece of trash. Killer Kim reiterates that she’s the champion and proceeds to pose with her championship belt over the downed Brooke Tessmacher.

Also, check out Christopher Daniels and Kaz’s deep dark secret about AJ Styles which involves scandalous photos of him making out with Dixie Carter behind closed doors!

Thoughts: I personally loved this week’s Impact for the females. I think one of the problems I’ve had with the division before recently was that all of the feuds were basically the same thing in that someone wins a contender match and then faces Gail or Madison in a variety of matches until the pay per view. Tonight set Brooke/Gail apart from that and made this feud more personal, which is exactly what I wanted to see. Brooke is going to be hellbent on proving to the world and Gail that she can beat the champion when the belt is on the line, and get some measure of revenge for Gail’s actions tonight. This feud finally feels more personal than usual and I think it’s a step in the right direction.

I will say that I miss the days when the Knockouts would get a lot of backstage segments or side feuds, but this is starting to reel us back into that direction. If Brooke and Gail can be the start of some storylines for the division, I would be eternally grateful because every woman signed to TNA can put on a good match and they deserve to get feuds that are more than just the basic number one contender schtick. They get the time to have actual matches, so all we need now is some stories!

There are a few other side things I want to discuss, with the first being Madison Rayne. Last week I commented how for the first time it felt like she was taking a backseat and getting out of the storylines, also adding that I wanted to see her get involved with something else. Well, it seems Impact Wrestling heard that and did it right because it seems to me that Madison may be involved in some sort of romance angle soon. I’m perfectly fine with this as well, and it’s more of what I wanted in the Knockouts doing side things. WWE is starting to get better with incorporating the females in roles with men, as you have JTG/Alicia Fox, Maxine/Johnny Curtis, Aksana/Antonio Cesaro, and more, so I would love to see TNA do the same thing since you have Winter, Tara, Mickie James, Angelina Love, and oddly enough ODB who I feel have barely been seen at all recently. Did ODB and EY go on a honeymoon and never come back like the child from Family Matters who went into the attic and was never seen again?!

But anyways, to sum it up, I think the Knockouts did a great job this week and I’m really invested in Brooke and Gail’s match at Sacrifice. I honestly have no idea where this could go now since Gail got the upper hand tonight. Before this, I was leading towards Gail retaining because Brooke had maintained the advantage every week, but who knows now?! I like unpredictability so please keep it up!

– Listen to our exclusive pre-Sacrifice interview with Brooke Tessmacher