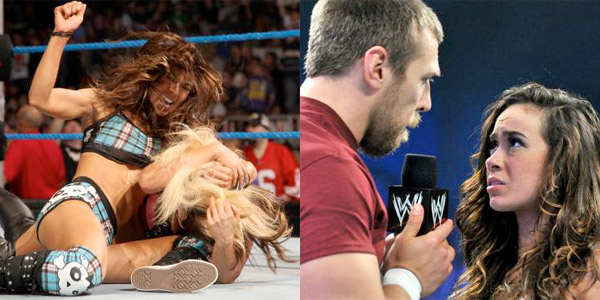 Hello all, and welcome to this week’s edition of the SmackDown Redux! After being assaulted by AJ two weeks in a row, Kaitlyn finally gets the chance to take on her former best friend in a singles match. Can the ex-Chickbusters put on a friendly match, or will AJ go off the deep end once again? Check out the match below:

We start off with AJ already in the ring looking distraught and conflicted, which is becoming the norm for her. Kaitlyn is out next and she doesn’t look happy in the least. The official signals for the bell and AJ rushes her ex-BFF, pummeling her with punches. Kaitlyn manages to make it back to a vertical base and goes for a clothesline, but AJ dodges, hits a low dropkick, followed by a Shining Wizard to pick up the quick 3-count.

After the match, AJ attacks Kaitlyn once again, but stops in her tracks when Daniel Bryan’s music hits and he comes strutting down the ramp. Daniel grabs a mic and commends AJ’s performance and says he didn’t know she could be so ruthless. (Did he not see those slaps?!)

Daniel goes on to say he sees AJ in a new light, and just when you think he’s going to take her back, he says he’s going to win the WWE Championship and move on… to Kaitlyn. AJ just looks at her former lover in shock, and for second something crazed and violent flashes across AJ’s face, before she takes off up the ramp with Daniel Bryan laughing behind her.

While there wasn’t much of a match, I’m really enjoying AJ’s slow descent into the realm of psychopath. I am just waiting for her to finally snap on Daniel Bryan, and I think we’re getting close. I’m assuming that the payoff would come at Over the Limit where Daniel Bryan has a shot at CM Punk’s WWE Championship. I could see AJ costing Daniel the title, or even joining forces with CM Punk.

This AJ/Daniel saga has proven to be one of the most interesting Divas-related storyline in recent memory, and it has the potential to make all the parties involved into stars. Hopefully, the WWE writers can keep it up on next week’s SmackDown and knock it out of the park at Over The Limit.