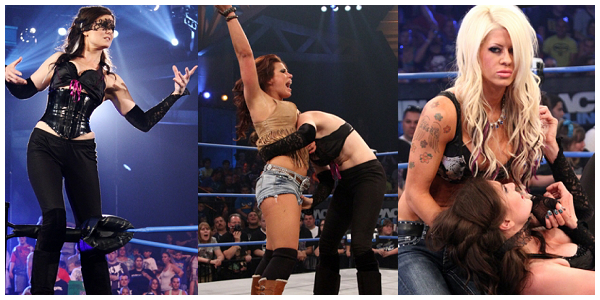 I know. I’m late again this week. I’m sorry. I had it going really well there for awhile but my schedule has caught up to me again. It’s been a rather…odd week, to say the least. Anyway, last week, we saw practically every Knockout on the roster take a spot on the show. We even saw another return from another former Knockout, in a rather confusing way. Not to mention, Karen Jarrett got shoved down the ramp in a wheelchair. It doesn’t get much better than that. However, this week, that former Knockout has some explaining to do and you had better believe someone is demanding the answers. Plus, one of the resident crazies is going to be taking on the Knockouts Champion. Which one will it be? Strap into your straight jackets and hold onto to your bunny rabbits.

We start out the Knockouts action this week with a visit to the Impact Zone from Velvet Sky. Her music hits and she wastes no time on the ramp, dancing around. She’s got her mind set on something and she marches her little ass to the ring like she owns the place. I’m digging the jeans but the top…it’s gotta go. Anyway, Vel Vel is quick to get on the microphone and tell ODB that they have some unfinished business to tend to. That sneak attach shit she pulled last week don’t fly with Vel Vel so ODB needs to woman up and get out there face to face. We want to know what her problem is. Face to face. Now.

ODB is quick to hit the ramp and may her way down, clad in cute capris, a dazzled up beater tank and yes, heels. And of course, a flask is in her hand. She gets in the ring and Velvet asks if she now minds, since they’re face to face, if she minds explaining what her problem is with her. Just like it should have been in the first place. ODB states that her problem is about a year ago, she got a little phone call from management, stating she was no longer needed in TNA…err, Impact Wrestling anymore. How is that Velvet’s problem? We all want to know that. She starts rambling off potential thoughts she had in regards to why, her bad attitude, her wrestling ability or was it Velvet?!

Velvet immediately goes on the defensive, stating she doesn’t mean harm on ODB or any of the other Knockouts but somehow, everything is always blamed on Velvet. She’s always the go-to girl. Everyone picks on Velvet. But she’s sick of it! She’s earned her spot in TNA and everything she’s earned, she’s worked her ass off for! How dare anyone say otherwise! ODB, always the quick witted, says only if Velvet calls working her ass off, laying on her back! Oooh! Those are some fightin’ words, buddy! But she isn’t finished! ODB goes on to say that she slept her way to the top and if she calls working her butt off, grinding her booty tang? What the hell is that?! I don’t even want to know the answer to that question. Honestly.

ODB turns on the hate and chirps at Velvet that she’s pathetic, all plastic’d up. With her little…err, big silicone. Velvet looks like she’s totally digusted and ODB starts mocking her, asking her if she’s going to cry and then insists on giving her something to cry about. She throws a hard left hand and knocks Velvet back, dropping the bitch word that is thrown around so lightly in Impact Wrestling. She takes Velvet down, throwing harsh left hands and choking Velvet, screaming that she likes it on her back. She is just on Velvet like she doesn’t matter at all in the world, beating her down.

Thankfully, after further humiliation and a random humping, security comes down and pulls ODB off of Velvet. The only remaining BP looks almost scared and when ODB gets off in the corner, she rips off her belt and tries to go back after Vel Vel with it. Luckily, she manages to get away and roll to the outside, while ODB is still scrambling with security. Velvet screams at her, asking her what her problem was and finally, we get the answer. Whores like Velvet are ODB’s problem. Well, drunks like you are my problem. Ahem.

Cue the creepy music that unfolds before Winter aka Morticia makes her way onto the stage. She steps up, looking like a bondage ninja and summons Frankenator aka Angelina Love. She slowly creeps out fro mthe back, dressed as only Angelina would dress and they make their way to the ring. Even when Morticia stops for a moment, Frankenator keeps going and crawls into the ring, her attention leaning toward her manipulator, showing off on the turnbuckle. You know, this just keeps getting more strange each week and I, honestly, am waiting for Angelina to get bolts shoved into the sides of her neck.

HARDCORE COUNTRY! Out next is the TNA Knockouts Champion, Mickie James. She bounds to the ring in her fringe and daisy dukes, hair pulled back in a cute curly ‘do. Frankenator’s eyes are locked on Mickie as she skips around the ring and you had better believe that Mickie is aware of it. Please remember that this match is non-title but this would definitely put Winter in the contender slot for the belt. Morticia gives Frankenator the okay to step out of the ring and she slinks backwards like a nasty snake, ready to strike at any moment. Ugh. Snakes.

We start with a very quick lockup that leads to a back armlock but with a harsh elbow, Winter knocks Mickie back to her knees. Winter stays on her, applying a bit of an armbar then powers her down, going for a pin attempt. She barely gets the first count before Mickie rolls out. Grabbing handfuls of Mickie’s hair, Winter slowly pulls her up but Mickie battles back, only to get a suplex for her efforts. Into a bridge pin and it’s close but no cigar. Instead, while Angelina looks on like she’s eerily intrigued, Winter keeps her hands on Mickie’s hair until she gets dropped with a jawbreaker. A rebound off the ropes and into the sliding dropkick, shifting the momentum. But will it last long?

Winter shoves the champ into the corner but when she attempts to charge, she gets an elbow to the face. Knocked back, Mickie gets her legs up and goes for the headscissors takedown, railing Winter with a flying forearm. A nice single arm flapjack and Mickie kips it up, the crowd behind her. Angelina, meanwhile, is watching like a cat on the outside, just studying the action. I’m just waiting for her to sprout into some kind of creature. Haha.

Mickie tries to go after Winter but gets a rake to the eyes, lifted up for some type of slam. However, the champion is too hardcore for Morticia. She battles out and sets her up, going for a straight stand spike DDT. The pin, a three count and the champion has won the match. She locks eyes with Angelina on the outside for a moment, being watched like a hawk as she saddles up on the turnbuckle, showing off that proud gold belt. Winter, not so graceful, is on the mat with her lace eye…thing, over her mouth. She pulls it down and there is blood coming out of her mouth. Angelina sees this and her eyes widen as she slides into the ring, quickly going after Mickie. She nails the champion and knocks her to the outside, wailing on Mickie with rough kicks to the abdomen. Just relentless and finally, she picks her up and slams her into the steps like a ragdoll. Damn. Pretty sure that’s a bleeding elbow.

But, before she can truly finish Mickie, the attention shifts back to Winter and Angelina is crawling back into the ring. She rests her mistress’ head on her knees and glares toward Mickie, the one who caused all this hurt. It’s like a demon posessed, defending its master with no regard for anyone. Very odd but should this date back as far as they’re saying, I’m pretty sure Angelina was a dragon in a past life, defending the evil witch Winter. But that’s just my guess.

Thoughts: Poor Velvet. I seriously cannot stand a drunken drama queen and that is basically what ODB came off as this week. A jealous old bitch with nothing better to do than go after someone who stands a chance in the business. Now, don’t get me wrong. ODB is tremendous at what she does but she has never been a looker, that’s for sure. She could be but she chooses not to be so instead, she relies on her in-ring talent. Whereas, Velvet has the looks and potential to be really good in the ring. It’s a shame they’re bringing her back this way.

As for Morticia and Frankenator….there are no words. All these Knockouts done lost their damn minds. Until next week, my lovies! xoxo