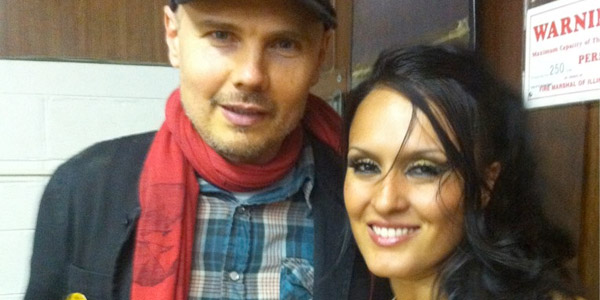 Our friends over at Dirty Dirty Sheets have a report on the filming of the Smashing Pumpkins’ music video for ‘Owata’, which took place at the Berwyn Eagles Club in Berwyn, IL, last night. Former TNA Knockout and SHIMMER star Cheerleader Melissa and former WWE Diva and TNA Knockout, Shelly Martinez were featured in the video. Original GLOW girl, Little Egypt, served as the ring announcer.

The setup was pretty similar to the one that AAW and SHIMMER uses with the entryway, guard rails, and ring. The big change was that they used a lot more lighting. They even used a spotlight for entrances.

Alissa Flash vs. Shelly Martinez is going to be the primary focus of the music video, so obviously it got the most attention. We had a guest ring announcer: former G.L.O.W. wrestler Little Egypt. She looked great, but couldn’t quite take Joey Eastman down as the Eagle Clubs’ top announcer. Shelly came out first with Raven. She was dressed in a revealing school girl dress and black top, and played up her sexuality throughout the match(es). Alissa came out with a SHIMMER Tag Team Championship belt. They would have used the singles SHIMMER Championship, but champion Madison Eagles had the belt in Philadelphia [Editor’s Note: Melissa thwarted again by Eagles]. This tag belt was Tomoka Nakagawa’s, as she didn’t take it with her to Japan. She was announced simply as “Women’s World Champion.

Alissa dominated to start, until Raven got involved, and threw her into the guard rail. Alissa eventually made a comeback, following a ton of offense from Shelley. Raven attempted to interfere again and Shelley ended up accidentally drop kicking him. Alissa won the match with an Air Raid Crash. After the match (this might not have happened with all takes), Raven took Alissa’s belt away, but ended up eating a low-blow.

Read the full report from the shoot here.