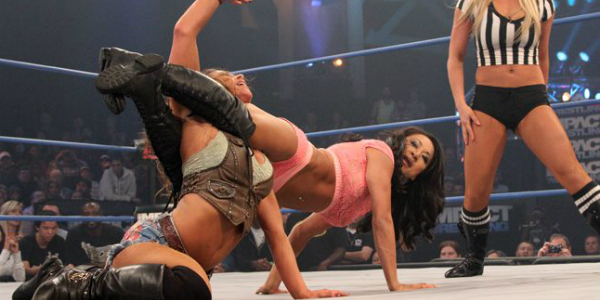 Impact Wrestling brought forth last night a match between #1 contender to the Knockouts Championship, Mickie James and her former arch rival, Gail Kim. Not too much on the segment front this week, but since it’s been so consistent otherwise with them, I’m willing to give it a week off and just enjoy some good solid action.

Mickie James is shown warming up backstage, followed  by Gail Kim as their match is plugged as being up next. Following a brief (may have been cut from the commercial) Christy Hemme pan up shot, Gail Kim makes her way to the ring quite elegantly. After a recap of Mickie eliminating Gail a few weeks ago to win the number one contender’s battle royal, the queen of Hardcore Country two steps her way on down the ramp and slides into the ring. Gail looks none too impressed with her opponent, but referee, Taryn Terrell signals for the bell to sound and we get started!

Gail with a quick roll up, but to no avail. A waist lock by the pink clad Knockout, who takes the advantage with a wrist lock. Mickie with a one armed cartwheel, but Kim has seen this trick before and managed to counter it. A few shots to the face of Mickie, as Gail continues to beat her down with a clothesline in the corner to taunt the “Let’s go, Mickie” chanting fans. Dixie Carter’s face pops up on the screen, but Gail refuses to let us pay attention to anything but her as she drops Mickie with the cross arm neckbreaker for just a two count. She slams Mickie’s face into the canvas, before applying a leg lock submission! The crowd continues to try and rally Mickie up, but Gail is completely dominating the match thus far. A two count as Mickie bridges up, before kicking Gail into the corner and hitting the flapjack into a kip up!

James heads up to the top rope, but Gail dodges the thesz press and hits a nice running dropkick. She goes for the pin, adding her feet on the ropes for leverage, but Taryn Terrell stops the count when she sees it. Kim attempts the Eat Defeat, but Mickie smartly throws Gail’s leg into the ropes, causing Gail to land with the rope between both of her legs. Mickie drills her with the Mick Kick, but she falls backwards, showing the effects of the match thus far. James finally crawls over to Gail and hooks the leg, but Taryn notes the other foot is under the ropes, which signifies that a count can not happen. Mickie drags her over and goes for the pin attempt again, but only a two count. Now Gail is in control, but just briefly as Mickie lands the Mick-a-rana from the corner!

A set of clotheslines and a dropkick mounts James’ comeback, following it up with a neckbreaker for another near fall as Gail gets the shoulder up. She now goes for the Mickie-DT, but Kim hoists her into the corner. Gail charges forth towards James, however, Mickie manages to lift herself up onto the top rope and allow Gail to collide with the turnbuckle. From there, she grabs Kim’s hair and leaps off with a huge tornado DDT from the second rope, which looks like it may have massacred poor Gail with the impact. (Fortunately, that’s not the case as she’s been tweeting as of this morning!) Mickie then hooks the leg for the one… two… three! Taryn raises her hand in victory, as Gail heads to the back and I assume plots her revenge on James, as well as concocts her own plan to soon become Knockouts champion!

Thoughts: Great match between Mickie and Gail! I’m sure anyone could’ve predicted that as long as they’re given the time, they’re going to deliver, but I was really into this match. Mickie looks strong heading into her challenge against Tara by defeating the inaugural champion, and Gail didn’t go down without a brutal fight. It’s excellent to have Mickie back and doing her thing in the ring, and while I’m still wondering what the month of ODB/Tara was about if it’s not culminating in a title shot, I’m just glad to see the females continue to be given a good amount of time to go out and wrestle. We’ve gotten to see a lot of fresh faces the past two weeks, and tonight we went live with only two shown so I’m still kind of wondering if the taped aspect has something to do with it. Not complaining however, because the match was great and it accomplished everything it needed to in order to set up Mickie for her title shot.