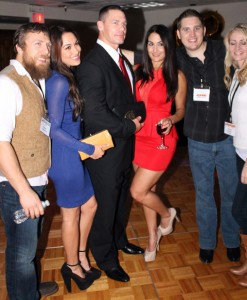 Imagine everyone’s faces when you show up to your 10 year high school reunion with John Cena?

Brie was seen in a striking long-sleeved blue dress, while sister Nikki — who has had some enhancements since leaving WWE — showed off her curves in a slinky red number.

The twins wrapped their whirlwind five year career with WWE earlier this year, but held on to some keepsakes, it seems! Brie has posted pictures of herself and WWE Tag Team Champion Bryan on Twitter over the past several months, confirming their relationship. Meanwhile, TMZ reports Nikki and John were getting close at the event.

It must be pretty cool to be able to say, “I was a former Divas Champion”, when asked what you’ve been up to in the past 10 years! Both Nikki and Brie held the Divas Championship during their WWE runs.

Check out pictures at TMZ.