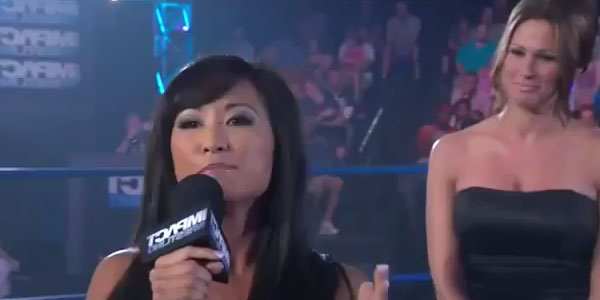 Come one, come all, to another edition of the Impact Write-Up! I’m sure you know by now that my recaps particularly take interest in the phenomenal Miss Karen, but this week, just like the thoughtful, talented, magnificent woman that she is, she’s decided to take a back seat and allow Gail Kim to be the focus of the show. That’s right! This week, Gail Kim (along with the Miss Karen army consisting of Madison Rayne and Traci Brooks) takes on fellow Knockout, Tara, in singles action. It’s their first meeting since 2004, so let’s not waste any time before jumping right into the show!

As the programme is about to head to a commercial break, we see the benevolent ruler, Miss Karen, walking to the ring along with her crew of Gail Kim, Madison Rayne, and Traci Brooks not far behind. Suddenly, we return from break as the theme music that Beethoven could only dream of creating blares across the sound system. Out come the four ladies, with three in particular being extremely nice to one another. For some ungodly reason, Traci Brooks is not showing Miss Karen the respect she deserves, but I digress…

Gail Kim looks ready for competition, as the four enter the ring with Traci (begrudgingly) holding the ropes open for the other three per Miss Karen’s orders. In a sight that I can’t seem to process… is that? Is that really? Is that Gail Kim… holding a… microphone?! I never thought I would see the day! Through all of those chorus lines, two minute 16 woman tags, and pajama fights has emerged a stunning swan about to actually speak on a wrestling show. Who’d have ever thunk it?

Gail lifts the microphone up and claims that everyone can stop with all the emails, tweets, and texts asking her why she did what she did to Velvet Sky last week. She says that it’s none of our damn business! (Did Gail Kim just swear? I love it already.) Gail says that she doesn’t owe ANYONE an explanation, but that if we really want to know why the little goody two shoes Gail Kim showed her bad side last week in giving the champ a concussion and sending her home, she would be happy to provide an explanation.

She continues on that throughout her entire career, all she ever did was try to do what everyone wanted. First during her opening TNA run, then continuing on elsewhere, and then finally it would’ve likely happened again if it wasn’t for the one and only… MISS KAREN! (Everyone take a pause and give Miss Karen a slow clap like I’m doing right now.) Miss Karen and Gail engage in a friendly hug of gratitude, as Gail states that Miss Karen helped her realize that it’s neither about the company, or the fans that never put a dime in her pocket, but that it’s about GAIL! It’s all about Gail being the center of attention! It’s all about Gail being the one who’s noticed! It’s all about GAIL being treated like the main eventer she is!

Miss Karen then picks the microphone up as these people somehow boo her?! Nonetheless, Miss Karen states that she is a queen of her word, as she grants Gail a Knockouts Title shot at Turning Point against Velvet Sky! She continues that the sooner we get the belt off that prostitute Velvet’s waist, the better. Gail promises Miss Karen that she will not let her down, as this crowd erupts in a “We Want Velvet” chant! She demands a piece of fresh meat be brought out to the ring so that she can show off her GREATNESS.

Just then, veteran Knockout Tara walks out from the back looking great in pink, but lacking her coveted motorcycle entrance. As she hurriedly heads up to the ring, Gail knocks her back down with a knee to the side. She slams Tara’s head into the ring apron, as the two women get back inside. Gail knocks Tara down and begins violently slamming Tara to the ground. Punches to the face, as the fans try to get behind the lady in pink. Tara tries to fight back, but Gail is all over this match to show her dominance.

Gail sends Tara into the ropes, but the Widow’s Peaker comes back with a kick to the face. Run off the ropes by Tara, but Gail counters whatever she had planned with a brutal clothesline for good measure. Gail proceeds to blow a kiss to the heckling fans, as Miss Karen taunts in approval. Kim begins screaming at a downed Tara, before throwing her outside the ring by the other three women. Traci goes to help her up, but Madison and Miss Karen toss her to the side and scold her. Gail flips Tara into the ring, as the show heads to a commercial break. (The price of highly rated segments I suppose.)

When we return, Gail is shown choking Tara in the corner. She drags her to the center of the ring, and Tara once again begins to show signs of life, before Gail takes control. Kim throws Tara into the corner, but Tara moves out of the way. Gail with a boot up, followed by an elbow, as she breaks out the flying dragon/christo maneuver! As shades of 2004 warm my mind, the crowd fights for Tara to make a comeback, and she follows up with a sidewalk slam! Gail lifts Tara up, before the Knockouts Tag Champion builds up a lot of fire with clotheslines and a flipping neckbreaker for a close count!

Traci claps for Tara, as Madison and Miss Karen give her two looks that may inflict harm on her alone. Tara hoists Gail onto her shoulders, but Kim holds onto the ropes and sends Tara crashing into them. Gail uses her leg to choke Tara, before dragging her to the center of the ring and nailing the Eat Defeat for the victory! Miss Karen and Madison hop into the ring, as Traci follows slowly behind. The three women celebrate, as Traci checks on Tara until the others drag her with them and celebrate Gail’s victory!

Thoughts: First of all, it was awesome to get to actually hear Gail Kim speak, let alone cut a great promo like she did. I didn’t even know she had that in her! Heel Kim is perfect for the division right now, and I hope she gets to show this character more every week. Onto the match… it was a little too dominating for me, although it was still a great match. I would have liked to see Tara get to show a little more, or perhaps replace her with Tessmacher as it’s easier to believe Gail could dominate someone new that she has never faced before, as opposed to someone like Tara who has been in wrestling for 10+ years. All in all though, I’m loving Heel Kim’s Knockout takeover, and I think this will be the best era of Gail since the days of Kong.