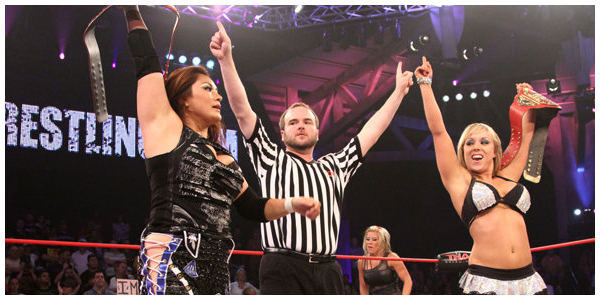 Greetings and salutations everyone! With Cryssi taking over the SmackDown Redux, I’ll be taking on writing up Impact. I’m excited about this, but I also hope I can do as good a job as she has done. Let’s get right down to it, shall we?

This week, we have TNA Knockout Tag Team Champions Taylor Wilde and Hamada facing off against Madison Rayne and the newly-returned to TV Lacey von Erich. It would be a major upset if Madison & Lacey were to overcome this formidable team. Can they work together to regain the gold? Or will Hamaylor keep those shiny belts around their waists? Find out below.

Before the match, we go backstage to see Lacey, Madison and Tara in their lockeroom. Lacey is clad in a towel yet again… perhaps it’ll be her new ring attire? Madison gushes about how great it is to see Lacey, and springs the news on her that they have a tag title match “like five minutes ago!” Lacey looks confused and she mentions that she hasn’t made her decision yet. At this, Madison’s temper flares. She screeches about how it wasn’t her that laid her out a few weeks ago and that there is no decision to make. Together, her and Tara bully Lacey into submission, ordering her to get dressed before leaving in a huff. Poor Lacey looks unhappy but there seems to be little she can do but comply.

The Beautiful People’s music hits and out come Tara and Madison on the motorbike, Lacey trailing behind. Without waiting for either of the two, Lacey bounces into the ring, which causes Madison to look slightly irritated. She shrugs it off and whilst Tara climbs into the ring, Madison climbs up onto the apron. Tara nudges Lacey out of the way so she can perch on the bottom rope and lean over, giving Madison’s ass a smack. Which is followed by a quick kiss. Tara goes to give Lacey a kiss as well but the blonde wants a handshake instead. I admit, I laughed! Taylor’s music hits and out come Taylor and Ayako, the latter of which has her belt hung around her neck. After posing on one knee, Hamada takes Taylor’s hand, spins her and gives her a smack on the behind! Cheeky Ayako! The two make their way to the ring and after posing for a moment or two, the match gets underway with Taylor and Lacey starting it off.

Quick as a flash, Taylor grabs Lacey’s arm and twists it, getting in an arm drag that sends Lacey to the ground. Taylor follows up with a unique looking rollup for a two count. Again, quick as a hornet’s nest, Taylor grabs that arm again and gets an inside cradle rollup, but only good for another two count. Lacey’s had enough by this time – she scrambles to her corner but Madison orders her to get back in there and “get her!” You can’t help but feel badly for Lacey, but she tries her best bless her heart. The two lock up in a collar and elbow tieup but Taylor quickly gets the advantage with an armbar. Lacey reverses, going into a side headlock. Taylor reverses into a side headlock of her own, and we switch to a shot of Madison. She looks pissed as all get out, screeching orders at Lacey. Lacey manages to power Taylor back first into her own corner, momentarily knocking the breath out of her. After giving a look back at her partner, Lacey rushes towards Taylor, looking possibly for a shoulder tackle but Taylor gets the foot up, causing Lacey to double forward. Hamada takes advantage and tags herself in, then mounts the top rope and executes a nice sunset flip into a pin! The ref gets a two count and Lacey scoots backwards into her corner. Madison (quite aggressively) tags herself in…looks like someone’s getting impatient.

Madison and Hamada circle one another before attempting to hookup but Madison shoves a knee into Hamada’s stomach, following up with fists to Ayako’s back. While doubled over, Madison whips herself off the ropes for momentum and drives her boot into Hamada’s head. Screaming at Lacey, “You see that?!?” she marches over and tags Lacey in, ordering her to “GO! GO!” Lacey gets in and hits her handspring into an elbow on Hamada. She gets to her feet and does a quick dance, which causes Madison to start screaming at her once again. Lacey goes for another elbow but this time Hamada moves out of the way, leaving Lacey to eat canvas. Madison looks disgusted as all get out. When Lacey makes it to her feet, Hamada gets her with a kick to the stomach which sends the poor blonde down to the canvas again. Dragging her up by the hair, Hamada scoopslams her near a corner. We can guess what’s coming…and indeed, Hamada goes up and hits a *beautiful* moonsault! Unfortunately she goes for a lazy cover which allows Von Erich to just barely get a shoulder up.

Ayako grabs Lacey by the hair and pulls her over to her corner, tagging in Taylor. Skirt Taylor goes up on the turnbuckle and hits a huge crossbody onto Lacey. The pin is only good for another two, however and Madison is screaming for a tag. Taylor’s got another side headlock but Lacey starts to rally, hitting forearm shots into Taylor’s midsection, which weakens the hold enough for Lacey to shove her off into the ropes. Madison grabs Taylor’s hair and slams her down to the mat. Rayne looks completely possessed as she bellows, “GET OVER HERE!” to which Lacey complies. Madison tags in and it looks like Rayne wants to hit a fatality on either Lacey, Taylor or both women. Rayne goes on the attack, shoving her boot into Taylor’s back, then straddling her to hit right hands until the referee breaks it up. She grabs Wilde by the head and hauls her up, slamming her knee into Taylor’s face. Whipping herself off the ropes for momentum, she hits a nasty looking clothesline on Wilde.  While her adversary is on the mat, Madison tags Lacey back in and the two hit a double team suplex on Taylor. Lacey goes for a cover, but it’s good for two only.

Lacey applies a sleeper but it doesn’t hold for long as Taylor gets to her feet and manages to hit a jawbreaker. This sends Lacey reeling and allows enough time for Hamada to be tagged in. Ayako hits three running boots in a row! She follows up with a headbutt that causes Lacey to spin before falling down. Hamada tags back in Taylor, who blitzes over and nails Madison with a forearm! Hamada has Lacey up on her shoulders and together they hit a double team combo of a samoan drop and a neckbreaker! I’m not sure what to call it but it’s impressive and very effective! Taylor goes for a cover and as the referee counts, Hamada gets Madison with a nice kick to keep her out of the ring. 1 – 2 -3 and it’s over! Hamaylor have retained the belts!  They hug and pose with their belts while we get a look at Madison Rayne’s face. O’ my. She is seriously not happy.

When the tag champs exit the ring, Madison enters it very slowly, very deliberately. Akin to a cat with a mouse, you could say.  She slowly, deliberately approaches Lacey and stands over her, arms crossed. Then…the explosion. Madison FLIPS OUT, screaming, gesturing, as Lacey slowly gets to her feet. She attempts to apologize and explain but Rayne’s having none of it. All of the sudden, our hapless Lacey grows some ovaries – she SHOVES Madison back onto her ass! She’s had enough! Madison looks stunned then furious, eyes blazing. From behind, Tara enters the ring and hits Lacey in the back with her massive helmet. Madison directs traffic as Tara straddles Lacey, pummeling her with her fists. It doesn’t last long, however, as the original Beautiful People storm the ring (their music accompanying them), but Madison and Tara pick this time to clear out. The two teams trash talk each other, Madison calling Lacey a loser in the process. By this time, Lacey has made it back to her feet and we close with Velvet hugging Lacey very protectively.

Compared to the first time that these two teams faced each other (substituting Madison for Velvet), this was a much better match. Lacey hit her spots on key, but her acting and character really shone. She came off belivable as the hapless friend caught between two sides, and then as the long suffering friend who finally had had enough of Madison’s strong arm tactics. It was great to see her stand up to Madison in the end. The ensuing assault brought out the original Beautiful People, which considering Angelina had objected to Lacey being a part of in the first place, was a nice touch. After all, it would’ve also made sense if Angelina had just let Lacey take the beating. Now the lines are clearly drawn in this war of Beautiful People. As to who will come out victorious, that remains to be seen.

I’m more excited about seeing Taylor and Hamada on the main show. They’ve gelled very nicely as a team, much like Sarita and Taylor did before. Their styles compliment each other well. The question is, who can they face off against? Tara and Madison immediately come to mind but they’re still involved in their own feud. It’s unlikely that Sarita and Daffney will team up. The Knockouts tag team division needs fresh blood if it is to survive. Why not sign Katie Lea, team her with Daffney (after a few try outs to see if they mesh as a team, that is), and start a feud? Or perhaps Christie von Eerie and Daffney? Maybe it’s the Daffney mark in me (there’s that word again..!), but put with the right partner, it would be a fresh team to challenge for the belts. There needs to be something done or, lets face it – the tag titles might as well be retired, and it pains me to say that since I like Hamaylor as champions. Gold looks great around Hamada’s waist. Hopefully in the future we’ll see some new faces and a rejuvinated tag team division.

Reminds me of a Motley Crue lyric, “You know, I’m a dreamer / but my heart’s of gold.” That’s it from Diva Dirt’s own Scream Queen, catch y’all next week.