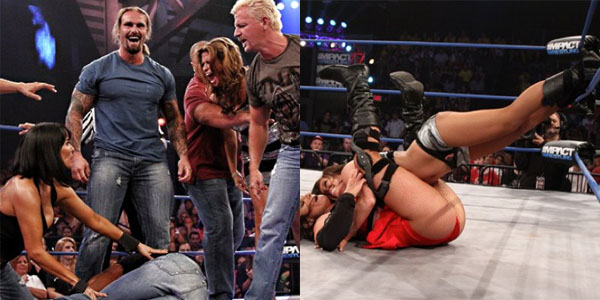 Previously on The Days of Our Wives: Traci Brooks slept with Eric Bischoff to try and lobby for the position of Knockouts VP. However, despite her “efforts”, the position was awarded to Karen Jarrett, the wife of TNA founder Jeff. Karen appointed Traci her … er, I mean assistant, berating her each week until Traci’s husband, Kazarian — who had been forgotten about while she cavorted with Bischoff — suddenly came back into the picture, defending his wife’s honor and insulting Karen in the process, calling her a “madam”. A furious Karen called hubby Jeff to inform him of her altercation. How will Jeff defend his wife’s honor?

And now, a new episode of Days of Our Wives…

Long version: A furious Jeff & Karen make their way down to the ring calling out Kazarian and Traci. Jeff berates Kazarian rounding off a laundry-list of things he’s supposedly done for Kazarian, and adds that he gave Traci an opportunity when no one else would. Jeff proceeds to call them “ungrateful bastards”, and that he’s going to make their lives hell. Now, it wouldn’t be a Knockouts segment without someone being called a “whore” — female empowerment and all! — and this week it’s Jeff calling Traci a “10-cent whore”. Is it necessary? No. But hey, let’s have our authority figures refer to our women as “whores” (or something similar) every week because that’s a great message to send. And this is the division which is supposed to empower its women compared to the “competition”. I think it’s one thing when the Knockouts call each other “whores” and “bitches” in heated feuds (not that it makes it any less derogatory, but I can almost understand it), but coming from an authority figure, it just feels like it buries the strides the Knockouts division makes.

And with Days of Our Wives over, it’s time for our regularly scheduled Knockouts match. This week it’s Madison Rayne and Tara renewing their feud in the final “Queen’s Qualifier” match. Who will earn the final spot in the four-way Knockouts Championship match at Bound for Glory?

Before the Knockouts even make their way to the ring, we get a pretty cool video package looking at the long history between Madison and Tara, stemming back to Tara forcibly retiring last year after losing to Madison, then her return to Impact Wrestling as Madison’s henchwoman and finally, Tara gaining her freedom earlier this year. Very nice stuff.

Madison is out first to the ring in camouflage colors, which if you’ve been following her on Twitter, you may have deduced is a tribute of sorts to her military-man husband, currently serving overseas. Madison is noticeably without her trademark tiara. I guess it’s now official: Karen is the new queen around these parts! Tara is next into the Impact Zone riding in on her bike. Tara’s outfit matches her red-leather Knockouts Tag Team Championship belt.

Meanwhile, in the ring, Madison seems to be flirting with referee Earl Hebner. What’s going on there, eh?

As the bell rings, the two Knockouts lock up as Tara overpowers her long-time rival, backing her into the corner. Referee Earl breaks things up as Madison lets out a banshee-like scream. Madison then cosies up to her night in shining referee shirt before sticking her finger in Tara’s face giving her a piece of her mind. No good can come from this! And it doesn’t… Tara takes Madison’s finger and wrenches it leading to a deafening scream from the former Knockouts Champion. Pretty funny spot. Things are eventually broken up by Hebner. Again, Madison tries to cosy up to the referee getting him to scold Tara. Madison goes for a shot which Tara ducks. Tara with a clothesline attempt but this time Madison ducks, runs the ropes but gets taken down with a shoulder tackle. Tara with a side headlock takedown. Tara holds in the move for a bit before rising to her feet and again taking Madison down to the mat. The Knockouts rise to their feet again and the hold is still in effect. With Earl’s back turned, Madison uses her free legs to kick the referee, but the blame falls on the Knockouts Tag Team Champion as her headlock hold is broken up by Earl as penance.

The devious Madison Rayne plays things up, telling Earl that Tara hurt her. As Tara goes to land a haymaker, Earl BLOCKS her and allows Madison to get in a shot of her own. WTF?! Taz explains that Earl must’ve thought Tara was going to punch him. Um, okay. Madison shows her gratitude to Earl for being her unwitting accomplice, stroking his face before returning to action. Madison chokes out Tara in the corner with her leg but as Earl breaks up the count, she flirts with him some more.

Madison then launches at Tara with a butt-bump followed by a facebuster across the ring. After some more flirting, Madison locks in her patented scissors move on Tara, smashing her face against the canvas repeatedly.

After even more flirting, Madison misses an opportunity to pin Tara and the veteran recovers, blocking a kick and then slams Madison against the canvas with a choke-hold. With Earl supposedly unawares, Madison slaps him on the head hoping to pin the blame on Tara, but this time is caught! Earl tells Tara to “Get her” and turns his back as Tara lets loose on the Killer Queen!

Tara clocks Rayne with big haymakers followed by a nice clothesline and snap suplex. Tara then hits Madison with a double-handed chokeslam before riling up the crowd for the Widow’s Peak! As Tara locks Madison into position, Madison manages to sweep her legs, taking her down to the mat and into a pin predicament using her feet on the ropes which Earl doesn’t see. Madison steals the victory!

Madison will advance to the Knockouts Championship match at Bound for Glory!

Thoughts: I really enjoyed this match mainly because of the involvement of Earl Hebner. I thought it added a fun dynamic. Madison was hilarious.

Despite the “10-cent whore” comment, I really enjoyed this week’s Knockouts action. With the stage now set for the Bound for Glory match, let’s see ho they build it up with two weeks worth of Impact in the lead-up.

What did you think of this week’s Knockouts action?