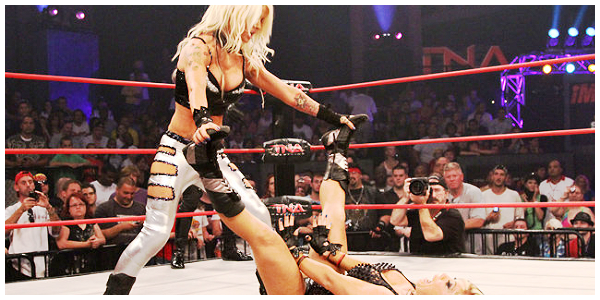 After weeks and weeks of pointless speculation, outlandish theories, and minor spoilers from other Knockouts, Tara finally showed her actual face on TNA television again. Absolute SHOCK reigned supreme in the Impact Zone and I’m sure I wasn’t the only person scratching my head at the dramatic turn of events! The announcers even seemed amazed. I mean hello! Tara is back and she’s helping the woman who ended her career no less! It’s mind boggling. It’s truly baffling. It’s more confusing that a statistical lecture in an 8am psychology class. It’s TNA! And in TNA, things don’t have to make sense!

Tonight we get underway with a pretty kick ass video package highlighting this feud between Velvet Sky, Angelina Love, Madison Rayne, and Tara. They show some clips from what I can only assume is TNA Reaction of the women talking, and that leads into a Knockouts Tag Team Match. The theme music for the Beautiful People begins to play and Velvet and Angelina are announced. Instead of those two coming to the ring, however, Madison and the yet to be unmasked Tara ride out from their usual spot. They stand there and wait because eventually, the original BPs do make their way on stage. Angelina and Velvet have coordinated themselves tonight with silver and black ring gear, and Velvet is carrying a riding crop. They do their usual ring entrance, much to the disgust of Madison and Tara, and play to the crowd for a little bit. Madison and Tara cautiously make their way to the ring, but Velvet and Angelina have come for a fight and they cut them off before they make it any further. Angelina beelines for Madison, and Velvet starts laying the smackdown on Tara!

Angelina eventually throws Madison into the guardrail and runs to Velvet. Tara has gotten the advantage in this brawl, but now with the two-on-one scenario getting evoked her back is now up against the wall. Angelina clubs Tara from behind and with help from Velvet, they throw Tara into the steel as well. Velvet starts screaming and walks over towards the fallen biker. She looks over her and then walks away. That’s confusing, but wait! No it isn’t. Velvet slowly gets back in the ring and low and behold, Angelina is getting in the ring too. Madison is begging Angelina not to take her angst out on her unaware that Velvet is behind her. Madison begins to back up but pretty soon she knocks into Velvet’s chest. Madison tries to play it off and then attempts to sidestep both girls, but they follow her. And to quote Taz, Madison is now stuck between a rock and a hard place. Madison tries to reconcile, but neither Velvet nor Angelina are having that. They take turns slapping Madison around between them, and finally Angelina gets poor little Madison into the prime position to be spanked. Velvet grabs the riding crop and plays to the crowd, and they urge her to start tearing Madison’s ass up because she’s been nothing but a naughty little girl as of late!

Tara makes the save by running in at the last minute and knocking Angelina down. She then goes and clotheslines Velvet. The referee bullies Tara out of the ring, and Velvet ends up on the outside as well. Funnily enough, the match finally begins. The bell rings.

Angelina is the first Knockout to her feet and she stops Madison from heading to her corner to make a tag. She grabs Madison by the legs and spreads them real wide. Angelina teases to the crowd what she’s going to do and Madison is screaming like a maniac to make sure that doesn’t happen. Angelina ruthlessly slams her foot into Madison’s vag (can I write that?) and goes for the cover. She gets a two count. Angelina wraps her arms around Madison’s neck and drags her to the OBP corner where Velvet tags in.

Velvet takes Madison down with a series of clotheslines and finally gets the former Knockouts Champion winded enough so Velvet can go for the cover. Instead of doing that right away, Velvet begins to slam Madison’s head into the mat while screeching and whatnot. Then, she goes for the cover. Yes, it’s another two count. Velvet gets back up and stomps on Madison a few times before dragging her over to Angelina. The reigning Knockouts Champion makes the tag.

Angelina greets Madison with a kick to the ribs before planting her with a nice little power slam. Angelina points at Velvet and asks her if she wants in. Velvet says yes so they exchange tags, but Angelina doesn’t leave the ring. She and Velvet loom over Madison, looking like they’re about to double team her, but instead they turn and knock Tara right off the apron! With Tara out of commission, they OBP successful double suplex Madison and Velvet goes for the cover. Tara is quick to scurry in and break things up. She starts griping at Madison but Angelina runs in the ring and horribly, HORRIBLY spears Tara out of the ring. Seriously, what was that?! Angelina follows Tara to the outside and kicks her a few times before returning to the apron. Tara crawls a few feet away and grabs her helmet. Inside the ring, Velvet is setting up Madison for her finisher but Tara gets in there (after nearly screwing things up) and hits Velvet in the back with the helmet. The ref didn’t see a thing because he was busy with Angelina, and Velvet goes down like a dead body in the ocean with cement blocks strapped to it.

Madison climbs over to Velvet and makes a halfhearted cover. Angelina just stands there while Velvet is pinned and Madison and Tara claim the victory. What?! Only after the winners are announced does Angelina get in the ring and try to attack Madison. Tara is waiting and Angelina ends up getting blasted with a stupidly large helmet as well. With OBP down, Tara goes to Madison and helps her up. Once Madison collects herself, she and Tara attack. Angelina and Velvet are unable to defend themselves. Once the post-match beatdown is over, Madison tells Tara to do it. Slowly but surely, the mask comes out and ZOMG IT’S TARA!!!!!!!!!11111!!!!!!!11111111!!!!!!!!!!

Madison leaps on Tara’s hip and raises her arms in the air. Tara is rocking some hot pink streaks in her. And the announcers seem just as baffled as I am that Tara is helping the woman who basically ended her TNA career. Just another night in TNA land!

The Good: First let me start by saying thank God the “Mystery Woman” storyline is finished! It was slowly killing me if I’m being honest. I apologize to all of you who thought that the biker babe was perhaps Roxxie, or Rosie in Spanx, or whatever. It’s Tara. It’s always been Tara. The vast majority of us knew this and last night, we gained a little bit of our sanity back with the big “reveal.” Okay. I reckon the first good thing about last night is Tara finally did reveal herself. The storyline was getting incredibly stale and now we can all move on. Madison and Velvet are finally going to get their singles match (which should be for the title in my humble opinion) and I fully expect Tara and Angelina to be at ringside and engage in shenanigans. I do not believe that Sunday’s match will be a blow off of this feud. I think this has just gotten started.

The brawl at the beginning of the match was enjoyable. I love how both teams came out to the same music, and my favorite part of the entire segment was when Velvet and Angelina cut off Madison and Tara before they could get in the ring. Brawls always get me excited, especially when girls are involve. It’s just bad ass and hardcore, and we all know OBP can scrape and fight.

On a side note, how hot were Tara’s pink streaks? Loving the pink and black hair!

The Bad: The match itself was sloppy and weird. The ending was just terrible but I’m in a jovial mood today so it’s not going to get “ugly” status. That spear from Angelina to Tara was one of the worst spears I’ve ever seen in my life and Ashley Massaro had some pretty horrific ones. I expect way more from two cagey veterans and both women epically failed on that account last night.

Tara dropping the helmet was pretty bad as well. The overall ending was bad. I don’t see how that weak of a helmet shot to the back could incapacitate Velvet so much that she couldn’t even get a should up. That was just sloppy booking. There are much better ways to end the match due to cheating.

The Ugly: Madison’s outfit was the definition of “ugly.” It’s a sad day when Angelina out-dresses someone, but low and behold, it happened last night. Girl, don’t ever wear that again. It was not flattering and it was so not cute. You can do and have done much, MUCH better. Thank goodness it can only go up from here.

To summarize tonight’s show in just one word, I would have to pick “alright.” The ring work was decent, the ending was terrible, the brawl was fun, and the big reveal was needed. I’m excited to see Velvet versus Madison on pay-per-view because their feud has been spectacular. I love their chemistry and I really hope they’re allowed to shine without Tara and Angelina stealing the spotlight.

Also, I’m looking forward to a return from Lacey either Sunday or at the next set of Impact tapings. She’s going to be forced to pick a side in this, I’m sure, I’m hoping she sides with the OBP!