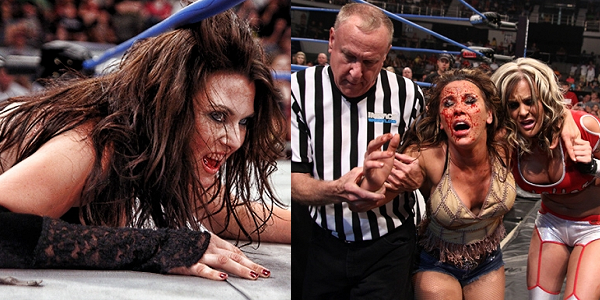 Last week on Impact, we saw the crowning of a new Knockouts Champion, much to the dismay of many, and the promotion of a new VP for the Knockouts divison. I wasn’t aware that there was ever a standing VP for the division but hey, this is a Bischoff move here. We also saw a disgraced Traci Brooks, who had apparently demeaned herself to unspeakable actions just to get that so-called VP position but that’s a whole other Jerry Springer episode that we aren’t programmed for. This week is the first official week for the new VP in action and she’s pitting two teams against one another and the results are dastardly. Not to mention, we get a preview of wicked ways yet to come.

The first glimpse sees us backstage with the new Knockouts Champion, Mickie James and her adorable, oh my gosh cuteness pup, Elvis. She’s chit-chatting with Velvet Sky, who is congratulating her on the win last week. But I think Vel Vel has ulterior motives, messing around with the belt like that. She says she one day wants to know what that piece of history feels like, wrapped around her waist. According to Mickie, sure, one day she might. One day. But as of right now, they have a tag match and they have to prepare themselves for it. But that inner chi session will have to wait because Karen Jarrett just walked in the room.

First words out of her mouth are in regards to the living situation of the Knockouts locker room. Although, considering all the kids she has, I’m sure she’s used to making that observation. Karen, obviously not an active PETA member, sticks her face down at Elvis and he instantly makes the assessment that she’s evil, thus the growl. Good job, boy. Mama Mickie needs to give you multiple treats for that one. “Does this look like a kennel to you?!” Um, no. Actually, it looks like a locker room that just happens to have a dog inside of it. But, thanks for trying, Karen.

“Two dogs are enough in this room, we don’t need three.” Then I guess you might want to see yourself through the door, eh Karen? Sorry. I’m not bitter. Not at all. Regardless of my personal opinion on the matter, the new VP goes on to congratulate Mickie on her win and inform her that in three days at No Surrender, she’ll be defending her title in a rematch against Winter. Oh boy. As for Velvet, she better go out there and bring the house down because there is more to Knockouts wrestling than just shaking your ass. Obviously. Speaking of which, it wouldn’t hurt if Velvet dropped a few pounds. That comes from management so lay off the cupcakes. I is dead.

Finally onto the match, in a near main event status, comes the pair of Winter and Angelina Love. They’re looking pretty fierce, Winter especially, in their matching black and blue which is what, I’m sure, they’re looking to turn Velvet and Mickie. Speaking of, ahem, let me clear my throat. HARDCORE COUNTRY!!! I wish I could burn both of those outfits they’re wearing because I am not a fan. But regardless of how I feel or how Karen feels, for that matter, Velvet isn’t shy about her skinny fatass and LETS THE PIGEONS LOOSE!

Starting things off, it seems to be Vel Vel and Winter but a little conversating with her lady lush and the hold up begins. This gives Velvet just enough of a window to sneak a tag into Mickie, who pops in, ready for a fight as usual. But Winter isn’t having it and she tags in Angelina. A lock-up and an unceremonious hair toss across the ring does nothing but piss Mickie off. She comes back, taking a huge handful of Angelina’s hair, knocking her back with a full left hand. Ring around into the corner, throw a harsh elbow and up she goes, spinning Angelina around like a top. A swing at Winter, who is quick to drop to the floor leads to a rebound off the ropes. A blind tag from Velvet and Mickie catches it, setting Angelina up for a sliding dropkick from an incoming Velvet. But Vel’s momentum is horribly short lived when Angelina drops her with a harsh jawbreaker. That’ll lead to a call from the dentist.

Here comes the tag to Winter, going for the brutality but Velvet fights back, slamming the wicked one’s face against the turnbuckle. Across the mat and up she goes, MONKEY FLIP back around and Velvet is on fire. She looks to set Winter up for that bulldog but Angelina is in. Quick like a whip, Velvet jumps up and locks those feet on her shoulders and rolls them both around like a stick in a cotton candy maker. Gather up that sweetness for just enough gumption to whirlybird Winter about the ring. Oh hai, Velvet’s wrestling skills. Where you been hiding? I guess it would in the closet, away from Angelina’s outside interference that lands you on your face.

It gives Winter the space to slam Velvet’s momentum down the sewer, trapping her in the corner. She purposely baits Mickie into the ring and gives Angelina time to choke Velvet back, giving into the double team. Vel Vel tries to fight back, scrambling to her corner but that hard hitting bridge suplex from Winter stops it all. A tag in to Angelina and she slaps a cheap shot across Mickie’s face. But the champ is feisty and comes barrelling back in, getting pushed back out by the senior official. This leads to some odd work of a would be double team that just didn’t happen. I don’t know what happened here. All I can say is that it ended with an awkward side slam of some kind from Velvet. I can’t describe it.

Taz makes a good point here, about Earl Hebner. He is the senior official and he ALWAYS referees the Knockouts matches. Huh. Anyway, the match is still going on and Velvet has just tagged in Mickie James. She’s up top and flying down with a Thesz press, dropping Angelina and Winter like a couple of dead weights. She gets the upper-hand on Winter, goes for the pin but Angelina is back in, breaking it up. However, Velvet is true to her colors and goes on the defense, nailing her former best friend. I’m starting to get dizzy again. There’s so much going on. Two women in opposite corners, Winter and Angelina try sending their opponents crashing into each other but we get a little do-si-do, if you will. This leads to a double whammy on Winterlina and the wicked witches are sent flying backwards for a moment. Yep. Definitely dizzy now.

Velvet gets right back up, going back to Angelina who sends her nails down Velvet’s face. She immediately goes after Mickie, who is trying to go after Winter and then Angelina gets speared by Velvet. Oh for cheese sake! Can we get some order in this mess?! It’s like trying to describe chaos in three words or less. You just can’t. But now that Velvet has taken out Angelina, it leaves the two who will face each other this Sunday. Mickie and Winter, who are back in the corner. Mick goes for the shot but gets slapped back, doing some kind of little dance and then…

BLOOD IN THE EYES!!!

This match just took a turn for the horror movie. Mickie screams like she just witnessed someone being brutally murdered and falls to the mat. I swear, her optometrist must be making a fortune. Winter, the opportunist, immediately goes for the cover and gets the three count. She slides backwards out of the ring, eyes staring a hole through Mickie as Angelina comes back around. They creep back up the ramp, arms raised in victory, blood seeping from the corners of Winter’s mouth. Is it Halloween yet? I’m ready for it.

I think this week was a pretty good prelude. Not a bad showing from the Knockouts this week. I’m glad that Winter hasn’t been pushed to the background after losing. I’m glad she has a rematch this Sunday and doesn’t have to compete in a number one contender’s match for it. It should definitely be interesting to see what she has in store. Anyway, until that time, my lovies. xoxo

What did you think of this week’s episode of Impact? Let me know in the comments below!