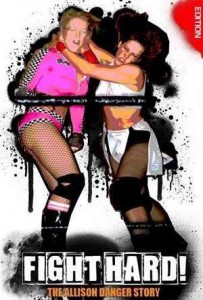 Like the shoot interview that accompanied it, “Fight Hard! Allison Danger Story” is a truly rare gem that each women’s wrestling fan should have in their collection. Produced by the same crew and in the same hotel where the shoot interview was held, Allison takes the viewers through a 2 hour and 15 minute journey into her world inside the business where she watched her brother reach the ultimate achievement in ECW, breaking into the business, and becoming one of the most well known and respected female wrestlers in independent wrestling today.

It would be a complete understatement to say that every aspect was Allison’s career was covered. She starts the documentary off by spending a good amount of time speaking on her life before the business, giving an insight into her childhood and her time in high school. Things really begin to get interesting when her brother, Steve Corino, gets signed to then-cult company, ECW. With no aspirations to become a wrestler, Allison fills in for the Sandman’s valet one night and becomes instantly hooked.

From then on, she hits the ground running at ROH by becoming a manager for the Christopher Street Connection and eventually being paired with Christopher Daniels and filling the female void in the Prophecy. She also talks about going to TNA in Nashville for a match where shortly after she flew to Japan to fill in for Daffney, who was then signed by the WWE.

Not everything in Allison Danger’s career was all rainbows and unicorns. In 2006, she began to string up a variety of injuries and talks about starting to become frustrated and bitter with pro wrestling. The injury she goes into detail about the most is one she had at All Pro Wrestling, in a triple threat match with Sara Del Rey and Cheerleader Melissa, where she suffered a concussion so devastating that she blacked out during several parts in the match.

In addition to the two hours of documentary footage, there is one hour one extras that includes outtakes from the documentary and a match against Daizee Haze from CHIKARA. The outtakes include stories about the ECW locker room, CM Punk getting punked, Matt Hardy’s dad yelling at her and making her cry, and plenty more. My favorite had to be about her being deathly afraid of Curry Man. Allison goes on to say that the mask is “the most frightening fucking mask” she has ever seen.

There were a lot of things I loved about this documentary. From an editing aspect, I liked how, despite being in the exact same setting as the shoot interview, it didn’t feel like a shoot interview. Strong Style Productions did a fantastic job with adding additional text, quotes, footage, and pictures to transform the feel of the DVD from being an interview to a documentary. Speaking of the footage, it was nice to hear her narrate her thoughts during a moment from a particular match while it was being shown. For example, I’ve seen the triple threat match between her, Sara Del Rey, and Melissa before. By the end of that match, it was obvious that Allison was hurt and to hear her talk about what had happen during that match was a very interesting touch. The only complaint I have is the music. Not only was I not a fan of the selection, but I also felt like it played during random times of the DVD. More particularly while she was speaking. Other than that, it was a very well made documentary.