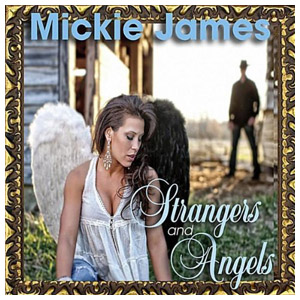 I received my copy of Mickie James’ ‘Strangers & Angels’ CD yesterday, and listened to every song today, so I offered to do a review for Diva Dirt. They said to go for it, so here goes!

First, a disclaimer. I’ve been a fan of Mickie James’ since she debuted in the WWE in 2005. But I’ve promised to be an unbiased reviewer, and I will be.

The first song is the single, ‘Are You with Me?’. It’s a country rock-style song that celebrates being a country girl. A good pick to be the single, its upbeat, catchy, the type of song that you’d find yourself singing along with. I’m sure everyone’s heard this one so I’m not going to spend too much time on it.

The second is ‘Hollywood Movie Moment’, one of the three songs Mickie co-wrote. In her interview with John Canton, she says that this song came from when she found out her ex-fiancée had been cheating on her. It paints a picture of how any woman who’s been cheated on would have liked to react (or may have reacted, depending on the person’s temperament). Rather akin to Carrie Underwood’s ‘Before He Cheats’. It’s a similar country rock style tune. At times, her voice tends to become ‘uneven’, but the pain she felt at the time is recalled and poured into the song.

The third track is ‘I Call the Fight’. You might’ve gotten the impression this one would make references to wrestling, but instead boxing is the theme. It likens a boxing match to a turbulent relationship she’s been through, with more downs than ups. Mickie’s ‘calling the fight’ – she’s giving up and walking away, she can’t take the punches any longer. It’s a softer song, relying on quiet backup from drums, guitar and piano. You can really get a feel for Mickie’s voice in this one since the instruments aren’t overpowering. She has a sweet voice, strong in parts, soft in others. She sounds vulnerable in this song – it isn’t easy to give up but sometimes you have to.

Next is ‘Freedom Song’. Mickie’s vocals are teasing here, sounding as if she’s playing a game, seeing how fast she can drive, how far she can go. To be honest, I’m not sure why it’s titled ‘Freedom Song’. The lyrics portray a woman dressed sexily, driving fast, flirting with guys in other cars. It’s a catchy tune, but unless the meaning is that she’s got the freedom to do these things, I’m not sure of the title’s meaning. To me, it’s the weakest song on the album.

The fifth track is the title, ‘Strangers & Angels’. It’s a beautiful song, speaking on how random people she’s come across could be there for a reason. To teach her to slow down, and have more patience with others. This is one of the stronger tracks on the album, because she sings with heartfelt wonder. You can tell she has experienced this in her life; people who at the time seemed to be holding her back were actually there to impart a life lesson or keep her from a bad end. There’s real feeling in the vocals.

‘Make Me Feel like a Woman’ is track number six. Mickie sings of being a hardworking woman who wants her man to, basically, make her feel like a woman. Maybe a hint of working in a male-dominated industry, coming home, tired of feeling like ‘one of the guys’? It takes nothing from the Shania Twain song the title is similar to.

The seventh track is ‘Fallin’ Over Again’. This is a song you could dance to at a wedding anniversary. It speaks of a relationship that’s hit some hard times, but she realizes she loves him and that’s all she needs or wants. She’s falling in love with him all over again. A slow paced song, perfect for a slow dance. Her voice is melodic here, plenty of heartfelt sweetness and love packed into the words.

Track eight, ‘When You Come Home Tonight’, is a song about re-igniting lost passion. It’s soft, not the overwhelming tune the lyrics would lead you to believe. Mickie sings: “I’ll barely give you time to get through the door / Then I’ll lead you down the hall, for a little more.” Definitely a Barry White type of song, done country style! One to play over a candle lit dinner.

The ninth track is ‘I’m No Good at Pretending’, the second of three songs on the album that Mickie co-wrote. Very catchy, it’s a song that’s good for line dancing to. As she said in her interview with John, this was written about a guy who was trying to play games with her. The song makes very clear she’s not into games, into pretending that everything’s okay when it’s clearly not. A strong song, in the Carrie Underwood vein again.

The tenth track is the last one she co-wrote, ‘Don’t Apologize’. Mickie’s said that she’s pouring her heart out in this one, and the emotion in every word is unmistakable. Her heart is broken but she has to walk away – she doesn’t want him to see how much he’s hurt her. This is a song that anyone who’s ever had a bad relationship can relate to. Soft, heartfelt, sad, it’s a quintessential country song.

The last track, number eleven, is actually a bonus song entitled ‘Dumb Bitch’. I admit, it took everything I had not to fast forward to this song, but I listened to all ten beforehand. On iTunes, aside from the single, this is the most popular song on the album. It’s easy to see why – it’s a song that many women can easily relate to. Some other woman’s trying to steal Mickie’s man, but she’s not going to get away with it. The dumb bitch should’ve known better! It’s a fast paced song, very catchy, and a chorus that says it all:

Listening to it all the way through, I could tell that Mickie’s voice isn’t as ‘polished’ as one might expect. This is a positive, however, because her raw passion and emotion shines through in each song. Even the ones that she didn’t write, she has made them her own. You can feel the joy, the pain, the optimism and the love put into each tune. She has infused each one with part of her soul. It’s a strong album from someone with no ‘professional’ singing background. Mickie James can only get better as she refines her voice and comes into her own as a professional country singer. My personal congratulations to her for making another dream of hers come true!

This review was written by Diva Dirt reader, Jennifer Logsdon. You can reach Jennifer on Twitter at @JenniferL134.