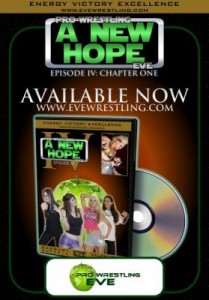 May 2010 saw the launch of Europe’s very own all-female wrestling promotion to sit alongside the likes of SHIMMER, WSU and Femmes Fatales which have cornered the US and Canadian market in the past few years. Coming from former ChickFight producer, Dann Read, it was evident that EVE would be no flash in the pan based on the success of ChickFight’s transatlantic shows in the UK a few years back.

‘Episode 4: A New Hope (Chapter 1)’, a long winded title as it may be, is the first the DVD release from the Suffolk, England-based promotion, with a promise of spotlighting the best of Europe. The title is pretty confusing, especially for a fledgling company trying to work up an audience. “If this is episode four, where are the first three?” is one question that I suspect may be asked often. Then there’s the ‘Chapter 1’ sub-sub-title. To clarify on that, two DVDs worth of footage were filmed on May 8th, which I’m presuming is why this is ‘Chapter 1’, with ‘Chapter 2’ to follow.

The theme for the DVD is a spoof of Star Wars, a unique approach by a wrestling promotion, which should set it apart from the SHIMMERs and WSUs. The DVD artwork and opening of the show both bear a nod to Star Wars (complete with scrolling text going up the screen!), which while indeed camp, kitsch and silly, are pretty befitting of British humour and I likened it to the old ‘Carry On’ films that are very quintessentially British.

Catch Division: Jenny Sjödin vs April Davids
The DVD opens with the Catch Division which is unique to an all-female promotion, a division dedicated solely to a certain style of wrestling with certain rules and like MMA or boxing, featuring rounds. In this case, the rounds are three minutes each and from what I gathered from the commentary, there are no pinfalls. There are many rules for the Catch Division, too many to make abundantly clear on the DVD, so viewers are directed to the official website for a full picture of how this works.

Derived from the ‘catch-as-catch-can’ style of wrestling developed in the 19th Century, I fear that this style and this division may be lost on today’s audience. Indeed, I am guilty of being one of those that it is lost on. I couldn’t get into this bout quite honestly, and as a show opener, I’m not quite convinced it works. That said, I can appreciate the closing of the match with Davids expertly isolating Sjödin’s already hurting ankle.

Perhaps it’ll take a few more of these matches and getting really acquainted with the rules for the Catch Division to really ‘fit into the jigsaw’ for me.

Alpha Female vs Becky James
Just one look at her and I’m already impressed with Germany’s Alpha Female. She has a fantastic look (think slimmer and slightly shorter Aloisia) and this match was set up perfectly, putting her over in a squash match. Alpha could perhaps be a spectacle attraction of EVE’s own, sort of like Awesome Kong or Sara Del Rey.

Not too much to add about this one. An effective squash match. Perhaps a couple of more of these and then move Alpha into a more substantial feud.

Four-Way Elimination: Carmel Jacob vs Erin Angel vs Melanie Price vs Saraya Knight
This match had a good mix of comedy and great ring work. To explain quickly, EVE works on a gym affiliation basis, making note of which gyms around the UK the wrestlers have come from — sort of like stables/groups. Two participants in this match, Carmel Jacob and Melanie Price, come from the Glamour Gym and are prissy Beautiful People-esque divas. I’m sure you can imagine the tactics involved — not wanting to get into the ring, cheating etc.

The other two participants are UK wrestling legend, Saraya Knight, and Erin Angel, who at 23 years old already has 8 years of in-ring experience. Despite the unfortunate Kelly Kelly-esque chaps, Erin Angel is a great babyface. She’s pretty, cute and bubbly and manages to get the crowd on side. Angel manages to hold her own with Saraya very well before being eliminated first.

Saraya then disposes of Carmel Jacob before finally getting her hands on Melanie Price, who has been avoiding her all match long. Great way to end the match, with the fans awaiting Melanie to get her comeuppance.

Good, solid match from start to finish. I was particularly impressed with Erin Angel who plays her babyface role really well and has a good in-ring repertoire. She also knows how to get the crowd on side, but I’m sure it helps that she’s pretty, young, blonde and has a nice smile helps! With a little makeover (get rid of the chaps!), Erin could easily be a WWE Diva.

Rhia O’Reilly vs Sara Marie Taylor
Another member of the Glamour Gym in action now, Sara Marie Taylor, a Scot who was helped trained by WWE’s Drew McIntyre. She takes on Rhia O’Reilly, who in case you haven’t guessed by her name and the big green dress she wears in her matches, is Irish!

Taylor is easily the most ring-savvy member of the Glamour Gym and does have good presence in this match. It’s clear to see she’s been inspired by some WWE Divas from her furry boots (Melina) and Trish-like headscissors attempt on Rhia who was perched on the turnbuckle.

Meanwhile, Rhia is a little more limited in the ring with 18 months of experience, but does know how to get the crowd behind her.

Decent match. Sara could be a one to watch in EVE.

Jemma Palmer vs Jetta
This marks the professional debut of WWE developmental signee and former Gladiators star, Jemma Palmer. This is her first match before a crowd, while it’s one of Jetta’s final matches of her career. Palmer comes out to the ring with her arm in a cast claiming she’s not medically cleared to compete and can’t take part in the match, however the loudmouth from Coventry soon interrupts and berates Jemma before slapping her. Palmer, having had enough, decides to compete despite the arm injury.

This match was a very one-sided affair in Jetta’s favour. I guess Jemma’s greenness is masked by the fact that she is ‘injured’. Not too much offense from Palmer, and the little we do see only shows further how green she is. Jemma is still in training so hopefully she can only get better.

I think this match was booked perfectly given the situation. Jetta playing the big bad bully created sympathy for rookie Jemma. If she can get that crowd support, it could help make up for her lack of experience.

Main Event: Blue Nikita vs Britani Knight
Main event time with Britani Knight, the 17 year old daughter of Saraya who we saw earlier, taking on Blue Nikita. The veteran Nikita has the upperhand for much of the match, but there are some great spots from Britani who seems very popular with the crowd. Being a wrestling prodigy (her parents are UK wrestling legends), it’s no wonder why. Britani is only 17 but is a pro in the ring herself, hitting a beautiful ‘Knight Rider’ (Last Call) on Nikita.

The end of the match is somewhat controversial, with Nikita laying out Britani’s mother Saraya at ringside. The distraction costs the young Knight the match but even so, she really did a great job and held her own against Nikita. It’s hard to believe that she’s only 17. Britani is definitely a star in the making. Like Erin, she’s also beautiful and has a Diva-look. Given her young age, she has her whole career ahead of her and could possibly make it to the States one day.

The DVD ends with a fantastic pull-apart brawl between Nikita and Saraya which pumps up the crowd and nicely sets up the next DVD.

Final Thoughts
In all, it’s a decent first outing for EVE but as always, there’s room for improvement. The more we get to know these girls over several DVD releases, the more I think these matches will come to mean. More exposition on each girl and storyline/feud development over the upcoming shows will certainly help.

With a running time of one hour and 13 minutes, EVE is much shorter than a standard SHIMMER volume, but personally I prefer this. I tend to have ADD when it comes to longer shows and find myself skipping a few matches but this was easy enough to get through in one sitting. I guess it is down to personal preference as I’m sure some would prefer a longer show to get ‘more bang for their buck’, as it were.

As a sucker for things like DVD production, I felt the packaging was great — nice clean design on the artwork. The DVD itself was easy to navigate — no cluttered menu screens etc. Good editing and production.