In Video: AJ and Layla Stay Mum on Double-Crossing Kaitlyn 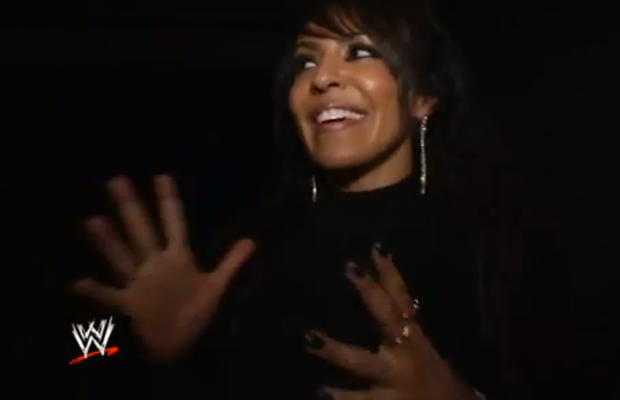 Last night’s SmackDown featured a Divas Championship match between AJ Lee and Kaitlyn, but the biggest story coming out of the match wasn’t the bout itself – it was Layla‘s apparent heel turn.

During the match, Layla blocked Kaitlyn from hitting a crucial spear outside the ring, allowing AJ to maintain the upper hand and eventually get Kaitlyn to submit once again to the Black Widow.

WWE.com’s Backstage Fallout crew caught up with AJ and Layla separately to try and figure out what happened and why. The interviewer first finds AJ and congratulates her retaining her title, asking her what the deal was with Layla’s interference. AJ doesn’t answer the question, appearing to be completely consumed with her own thoughts.

AJ hysterically explains that she vowed that she would never lose the title, as that was the only thing she had left, and she kept that promise. She said it’s not going to leave “like everybody else.” She caps off the interview by acknowledging that they’re in Kaitlyn’s hometown of Houston, saying that she likes New Jersey – her home state – better.

When the camera caught up with Layla, she too dodged the question, opting to comment on Kaitlyn’s hometown crowd, saying that they gave her the “best reaction ever.”

Both Divas are being cryptically quiet about their alliance. Maybe they’ll reveal all this Monday on Raw?