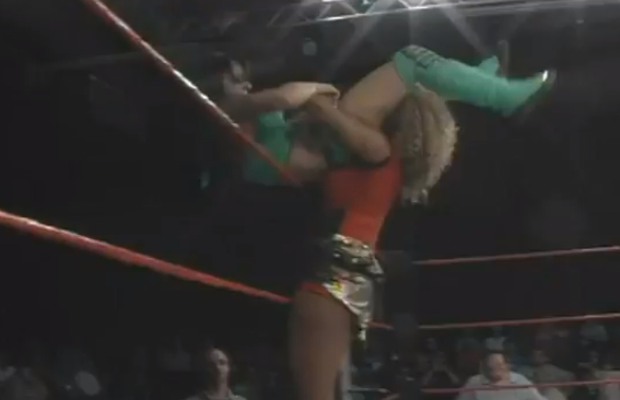 After the talking the talk last week, the ladies of OVW are set walk the walk and do battle to become the new number one contender to the OVW Women’s Title. The winner will earn a shot at the title at the next Saturday Night Special (tonight, August 3rd). Will the dominant Lei’D Tapa meet expectations and come out on top of the Battle Royal? Let’s see:

Out of the curtain first is the champ herself, Trina. She joins the commentary team for the following match.

The first competitor to hit the ring is Taeler Hendrix. She and Heidi Lovelace will start the match, with the rest of the seven competitors hitting the ring every minute.

Obviously, we’ve got a lot of history between these two. Taeler invites Heidi to kiss her to start things off, but gets a slap to the face instead. Heidi immediately tries to eliminate Taeler by hoisting her over the top rope, but Taeler clings to the ropes, eventually catching Heidi in a body scissors and getting away from the edge of the ring. She returns Heidi’s slap for good measure.

Taeler then follows Heidi into the corner and immediately tries to lift her up and over the ropes. Just as she’s doing so, the first minute expires, and Hannah Blossom enters the match, attacking Taeler and saving Heidi from elimination. Is the Blossom twin thinking of starting an alliance here?

Nope. She quickly turns and continues what Taeler started, trying to lift Heidi up to the top rope. Taeler takes a quick breather and then gets back into the action, but finds herself getting double teamed, Heidi and Hannah working together to try to eliminate her.

They’ve got her balancing on the top turnbuckle, trying to keep herself from falling over the ropes. She gets two handfuls of hair and the women back off, allowing Taeler to land safely on the inside of the ring. Heidi wastes no time going after Hannah now, trying to lift her up by the leg as our fourth entrant heads to the ring.

Nikki St. John hits the ring just as Heidi and Taeler start to work together, and she joins the group, but Hannah manages to avoid elimination. Nikki goes after Heidi and Hannah as Taeler takes a break, appreciating having an ally in the ring to do her dirty work. But, no Nikki’s having none of that! She takes a swing at Taeler, who ducks and shoves her into Heidi.

Heidi and Hannah have Taeler and Nikki in the corners and attempt to Irish whip them into each other, but Taaler reverses it, sending Heidi colliding with Nikki. Hannah and Taeler then hit each other at the same time, and now everyone’s down.

Just then, Holly Blossom‘s music hits, and we have our fifth competitor. She springs into the ring and comes face to face with her sister. Holly wants to team up, but Hannah has other ideas, going after her sister and starting a tussle with her. They go to hit dual dropkicks, but get nothing but air.

Nikki comes up behind the twins as they’re fighting, and Taeler pulls down the top rope, allowing Nikki to toss Holly out of the ring. We’ve got our first elimination! Holly can’t believe that her sister just watched as she was eliminated. Sibling rivalry~!

The ladies continue to fight amongst each other as Lylah Lodge makes her entrance, sort of awkwardly when you consider there’s a match going on in the ring. Hannah immediately goes after her, sending her to the mat with a kick. As Hannah deals with Lylah and Nikki and Heidi square off, Taeler sits largely unnoticed, hugging the steel pole outside one corner of the ring. The officials eventually chide her into getting back into the ring, and she does so reluctantly.

Jessie Belle then makes her entrance, leaving us with two women left to enter. Jessie goes after Lylah as Nikki has Taeler in a vulnerable position. Taeler latches on to Nikki’s foot, sweeping it out from under her and allowing herself to get back to safety.

Heidi fights out of a double team by Taeler and Nikki with some help from Hannah as the announcers begin a countdown to the next entrant. And there she is! Lei’D Tapa enters the fray.

Heidi comes charging at her, but eats boot. Hannah tries the same, but gets eliminated quickly. Lylah starts to try it herself, but thinks better of it, and Taeler and Nikki end up testing the numbers game on Tapa. Jessie and Lylah soon join in, and Lei’D has four women ganging up on her!

Like the powerhouse she is, though. Tapa powers them all off, and they go flying across the ring! She then picks Taeler up like a rag doll and drops her over the top rope. Nikki goes next. Just as Tapa is eliminating Jessie, the final entrant comes to the ring: Envy.

Envy watches as Lei’D eliminates Lylah, and then tries her luck. Tapa latches onto her throat and flips her backwards over the ropes, sending her out of the ring for a quick elimination. She seems distracted by the title’s presence at ringside, as she points at Trina and indicates that she’s coming for her next. Meanwhile, Heidi is still there, slowly creeping up behind her.

She punches her in the back, but it doesn’t seem to do much other than remind Tapa that she’s there. Lei’D seems ready to toss her from the ring like the others, but Heidi holds onto the ropes, flipping Tapa over and out of the ring! Heidi wins!

No one can believe it, including Heidi herself. Trina enters the ring to shake Heidi’s hand and lift it in victory. Lei’D’s still there, though, and she stalks back into the ring, surprising Heidi with a kick to the face and Trina with a neckbreaker. Both women are down as a pissed off Lei’D grabs Trina’s title and tosses it at her.

A masked man comes out, and by the announcers’ reactions, this dude normally destroys anyone in his path. He surprises them, though, by helping Trina and Heidi to their feet and raising their hands. I feel like I would get more out of this moment if I ever watched the non-women’s portion of OVW, but.. yeah.

So it’s Heidi vs. Trina at the Saturday Night Special! Keep an eye out for spoilers on that this weekend.

Thoughts: Well, that was certainly a surprise. It’s clever booking by OVW to not have Lei’D Tapa win, as most must have felt that this Battle Royal was just the icing on the cake of her recent push to the top. But, thinking about it, she’s been on a path of destruction, and with so much invested in making her that indestructible force, it might be too soon for her to win the belt. Having Heidi win the match was definitely a swerve, especially since now it’ll be face vs. face for the title, and I appreciate a good swerve.

Though, I get the feeling that Lei’D will factor heavily into this match, either costing Heidi the win, coming in and causing a double DQ, or maybe just straight-up attacking Heidi before the match and taking her spot. Who knows? I just appreciate the fact that OVW surprised me!