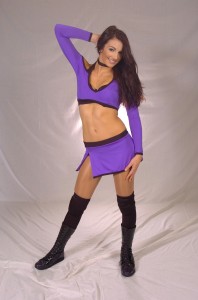 You may know her as “Everybody’s Favourite Girlfriend”: originally from Sydney, Australia, but having already worked for some of the USA’s top independent promotions (SHIMMER Women Athletes, Slammin’ Ladies, Ring of Honor, CHIKARA and CZW, to name just a few), Jessie McKay is fast becoming a fan favourite everywhere around the world.

Trained by Australian wrestling veterans Madison Eagles (who is now entering her second year as the SHIMMER Champion) and Ryan Eagles (also making a name for himself in the US) at the Eagles Wrestling Academy, the 5’8″ McKay made her wrestling debut on June 23rd, 2007 – an important date to be sure, as it was also the day McKay celebrated her 18th birthday. Her first match was actually a triple threat featuring not only her trainer Madison Eagles, but also Aurora. Madison and Jessie went on to feud for several months, including partaking in a particularly brutal Tables Match (won by Eagles, but not before Jessie had gained both hers and the crowds respect for the beating she took). From there Madison took McKay under her wing, forming the heel tag-team, ‘The Pink Ladies’. The Pink Ladies later added a third to their group, rocker Penni Lane, and wreaked havoc on everyone in PWA Australia – men and women alike – for much of the next year.

McKay picked up her first championship in August 2008, claiming the PWWA Title from then-holder (and current SHIMMER wrestler) Kellie Skater. She won it a second time in September 2009 after defeating Skater, Sway and Shazza McKenzie in a fatal four way match.

Jessie has spent the years following honing her craft both in her home country of Australia and overseas as well… now, with four years of experience under her belt, she has been impressing in international matches against the likes of former TNA Knockout Cheerleader Melissa, Sara Del Rey, joshi wrestler Ayako Hamada and especially in a well-garded SHIMMER title match agai 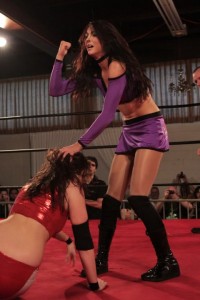 nst her trainer Madison Eagles on SHIMMER Volume 35. She spent much of 2010 feuding with Canadian NINJA Nicole Matthews, the two of them exchanging wins and losses across several volumes on the SHIMMER series (Matthews settled the score when she pinned McKay in a 2-out-of-3 Falls Match on SHIMMER Volume 39.)

Back home, she has gained many frequent flyer points and racked up many miles travelling all over the country: from Sydney to Queensland (PWA Queensland, where she teamed up with Shazza McKenzie to form ‘The Mac Attack’), Adelaide (NWA Pro and Riot City Wrestling), Melbourne (Warzone Wrestling), Perth (New Horizons Pro Wrestling, where she’s wrestled against both Amazing Kong and Nikki Roxx) and back again.

Jessie boasts an arsenal of impactful moves like the hurricanrana, head scissors and the ‘Chick Kick’, but puts her opponents down for the count with a sit-out uranage (cutely titled the ‘Boyfriend Stealer’) or a Northern Lights Driver and tries to make them tap to an Octopus Stretch named ‘7 Minutes in Heaven’. She cites her future aspirations as ‘being the best wrestler that she can be’ and wants to keep learning and improving. Getting signed by either WWE or TNA is her dream goal – and the sky is the limit for this young wrestler.

Outside of wrestling, you will find Jessie McKay in her room playing video games or watching movies – she calls herself a ‘big geek’, as well as a huge movie buff! McKay has also played basketball since she was six years of age, and now plays in the ABA League for the Bankstown Bruins.

Jessie most recently wrestled for AAW on September 30, teaming up with MsChif and Nevaeh to take on Madison Eagles, Mena Libre and Sassy Stephie. She also appeared on all four SHIMMER volumes filmed October 1 and 2, taking on the likes of Portia Perez, Mia Yim, Athena, future WWE diva Britani Knight and Hiroyo Matsumoto. She followed this up with a match against famed joshi wrestler Kana in CHIKARA October 7.

Many of her matches can be purchased over at our partner site, ClickWrestle.com.

** Are you an independent female wrestler looking for exposure? We’re looking to highlight new talent in an ‘indy spotlight’ weekly feature. If you’re interested in getting your name out there to over one million visitors, email us at [email protected] We look forward to hearing from you! **