Jackie Haas is Tough Enough: Week 1 (“Get Your Teeth Out of My Ring”) 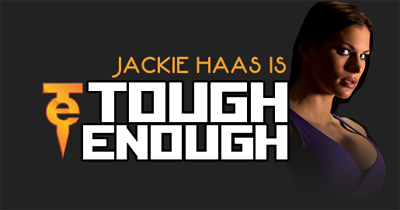 And so it begins… all over again. First off, I cannot thank all those at Diva-Dirt.com for the weekly opportunity to express my thoughts on the latest rendition of Tough Enough! I also want to wish each and every one of the contestants the best of luck with this endeavor and hope that they really enjoy the ride because it happens in a blink of an eye and is one hell of a roller coaster ride!

I encourage all of you who are following the show – and just the avid wrestling fans that you are – to comment on your thoughts about the series being “revived,” as without fan appreciation, where would the world of pro wrestling be?

Where to even begin? I can honestly say that I’m super excited for the return of the series that brought me so much in my life thus far. I was captivated by the first few minutes of the episode to follow the entire series as simply a fan. ‘Stone Cold’ Steve Austin makes the absolute perfect host (nothing against ya, “Big”), concise and to the point, I must have said “Did he actually say that?” two dozen times during the show but this is what will really attract such buzz and following for the series. His “no bullshit” attitude should not be downplayed for a second, and each and every one of those contestants really needs to understand what it is that they are getting themselves into; until you actually live it, you have no idea what a ride the world of WWE and pro wrestling as a whole will take you on.

Whether it actually is Stone Cold that makes the decisions for the cuts (or if it’s underlying production and WWE), the right decision was made to get rid of the weakest link, in my eyes. Sorry Ariane, nothing personal at all. I just really think she does not exude the all-around strength – inside and out – to carry her to be a successful powerhouse in the WWE, which is what Vince is ultimately looking for whether it be in the future male or female WWE Superstar.

Trish Stratus, Booker T and Bill Demott (although I can’t believe I am watching Tough Enough without Al Snow, boohoo) will make tremendous trainers throughout the season, as each of them has so much to share with the contestants. As a woman in the business, emulating the success of Trish is something that the ladies should soak up as much as possible. Booker T’s success speaks for itself and he is just such a wealth of knowledge of what it takes to be a huge name within the WWE. And as long as Bill keeps Jeremiah’s – and his teeth – intact, and keeps reminding Michelle of her 11 year seniority, then he’s got my support! (I think Jeremiah is going to be my early favorite – he’s got spunk, size, respect and seems to have a knack for inside the ring… or at least what “reality television” portrayed)!

As always, thanks for everyone’s support out there following this blog, professional wrestling and reality television as whole; for without the combination, I would certainly not be where I am today and blessed with such a tremendous family. Kinda funny how life comes full circle, as one thing always dares to hold true in wrestling and my life – never say never, anything is possible if you want it badly enough, if you are truly ‘Tough Enough’ to go and get it!