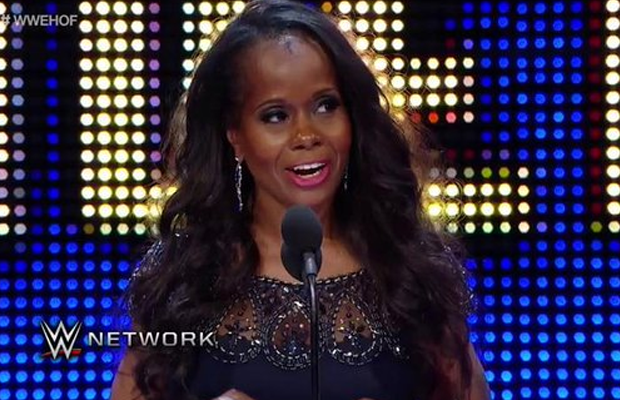 Tonight in Dallas, Texas, Jacqueline joined the prestigious ranks of the WWE Hall of Fame as part of its class of 2016.

The Dallas native, two-time Women’s Champion and all-around barrier breaker was inducted by her longtime friends, Bubba and D-Von Dudley. The duo shared stories about Jacqueline’s toughness, infamous cheapness and her enduring friendship, calling her one of the toughest human beings they’ve known.

When Jacqueline took the stage, she took fans on the journey to her history-making Women’s Title win, sharing that she first entered the businesses by answering an ad in TV Guide looking for wrestlers. That led her to a gym in Dallas, where she made her first friendships in the wrestling business.

Jackie expressed her gratitude towards the WWE for giving her the opportunity to compete on a grand stage, calling her second Women’s Title win the pinnacle of her career. She went on to thank the fans, her friends and family, as well as her fellow Divas Trish Stratus, Lita, Molly Holly, Terri Runnels, Victoria and Sable.

Congratulations to Jacqueline on this hard-earned honor!

You can replay Jacqueline’s WWE Hall of Fame induction now on the WWE Network.