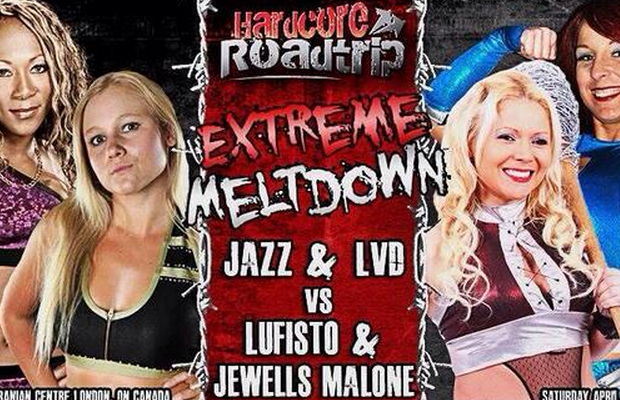 Stars of the independent scene Jazz, Jewells Malone, LuFisto and Leah Von Dutch got a lot less than they bargained for at the Hardcore Roadtrip’s “Extreme Meltdown”, as none of the talents got paid.

In the main match featuring the women, Jazz teamed with Leah Von Dutch against Jewells and LuFisto.

Stories of what happened appeared on SLAM! Wrestling here and here. The promoter Mark Livingston disappeared before the show ended, with his wife saying that she needed to take him to hospital. However, it appears that this was a ruse. The promoter has since deleted his Twitter account.

In addition to not paying talents, Livingstone had also not organised travel from the event to the airport to take the talent home.

Leah Von Dutch, who cracked ribs during the match, tweeted positively despite the situation and her injury. She said:

I still worked with Jazz, LuFisto and Jewells. I have cracked ribs but I cherish the experience.

Jewells Malone also took to social media to discuss what happened. She was also positive despite being swindled. She tweeted:

Fact: everyone got fucked over on pay at hrt. Other facts.. I had 2 great matches and learned a lot & the fans had a great time #karma! !

LuFisto also spoke about the “BS” and thanked fans for their support. She stated:

Thank you to all the fans, fellow wrestlers and promotions who have shown support regarding the Hardcore RoadTrip BS. Much love and respect.