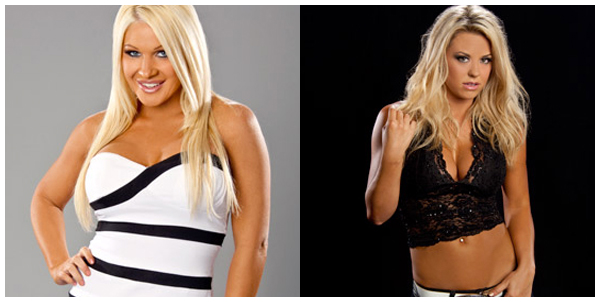 WWE has announced that former Divas Champion, Jillian and SmackDown Diva Tiffany have both been released.

Neither Diva has been seen on television in quite some time due to various reasons. For Jillian, it’s because WWE wished to move her into the role of trainer for the female talents in developmental. For Tiffany, she had been serving an indefinite suspension due to an altercation with husband and WWE star, Drew McIntyre in their hotel room back in August.

Jillian made her debut in 2005 after working in OVW, first debuting on SmackDown as ‘image consultant’ to MNM and then JBL. Originally, Jillian sported a growth on her face which was then bitten off by the Boogeyman. Jillian then adopted a tone-deaf songstress gimmick, ‘performing’ before her matches and even released her own Christmas EP via iTunes in 2007 — a re-release of which was issued earlier this month, with WWE.com doing a big feature on it. Despite being an extremely gifted athlete, Jillian unfortunately never truly reached the top of the division minus a five minute stint as Divas Champion last October. Jillian won the belt from Mickie James and immediately dropped it to Melina.

As for Tiffany, the former Diva Search contestant was originally hired to a developmental deal in 2007 after the Search. She joined the ECW brand as assistant GM and then GM until the brand folded this past February. Tiffany then moved to SmackDown, competing in the Divas division, where she really impressed in the matches she had against the likes of Michelle McCool. Considered to have great potential, her career came to a halt and has been in limbo since that incident in August which made newspapers in McIntyre’s home country of Scotland. Tiffany has been suspended since then and frankly, it’s unsurprising (though sad) that she was released.

Good luck to both performers.