Welcome back to another edition of the Joshi Roundup! Apologies for missing last week, life got a bit too hectic for a minute there but things have returned to normal. We have a little catching up to do so let’s get to it!

It has been a slow few weeks for true “news” aside from match announcements which I will go over in a minute. No major injuries to report or promotion changes. So since we missed a few weeks of events and schedules we will jump straight to it this week.

Needless to say there were a lot of events in Japan the last two weeks! I will highlight the bigger matches that took place so we can catch up. First, WAVE had their big anniversary event on August 9th, featuring a title match, a special appearance by Minoru Suzuki, and the debut of transgender wrestler Asuka! Here are the partial results:

Next, JWP had their annual Plum Mariko Memorial Show on August 16th. Plum Mariko tragically died on August 16th, 1997 after taking a wrestling move during a match (her time of death was several hours later, however she never regained consciousness). Mariko was the first Japanese wrestler to pass away from injuries suffered in a wrestling match. Here are the major results from the show:

I will admit I am only mentioning this show because two of my favorites were in the main event. In REINA on August 12th, Syuri took on Hikaru Shida in a rare singles match between the two that I can only hope was taped. Here are partial results from the show:

We will round things out with Stardom, as Stardom had a smaller event on August 9th. The results were:

The biggest news for upcoming events is that SEAdLINNNG has announced the full card for their debut on August 26th. SEAdLINNNG is a new wrestling promotion, owned by Joshi star Nanae Takahashi. Here is the full match list:

Finally, a quick rundown of the major matches taking place in the next week:

I promised a month ago that I would spotlight Command Bolshoi one week, as I think that even amongst those that follow Joshi she is someone that flies under the radar. It is important to note that she does dress a bit like a clown (literally) so it is easy not to take her seriously: 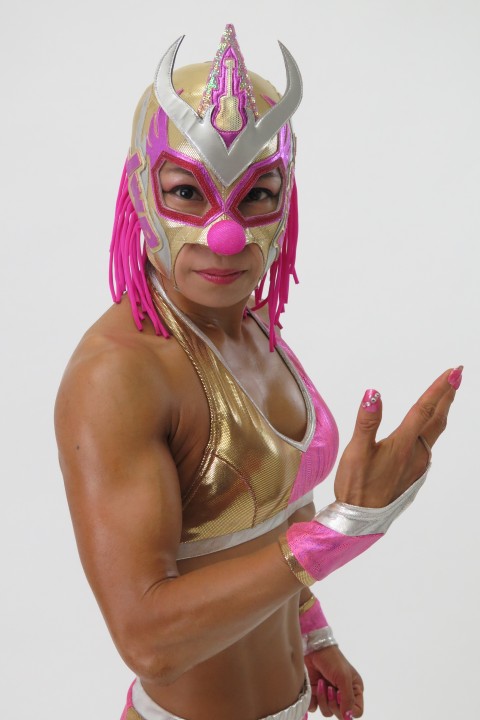 But that would be a mistake, because she will wreck you:

Command Bolshoi debuted back in 1991, so even though her age isn’t known she is likely in her 40s and still wrestles at a high level. She also has been in body building competitions and has held five championships in her career in JWP, Ice Ribbon, and REINA. A veteran of the game, Command Bolshoi is still one of the best in the business.

By next week there will be a lot more results to go over, as there will be multiple title matches as well as the start of Stardom’s FIVE STAR GP. I will also spotlight a new wrestler as we take a closer look at Stardom wrestler Mayu Iwatani! As always, if you have any suggestions for the column, let us know!