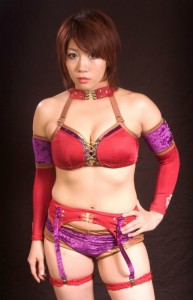 Joshi star Kana is the next name added to the SHIMMER tapings that will take place on October 27 and 28th in Berwyn, IL.

[notice]SHIMMER – WOMEN ATHLETES is pleased to announce the addition of “The World Famous” KANA to its October 27th & 28th weekend of events at the Berwyn Eagles Club (6309 26th Street) in Berwyn, IL! Volumes 49-52 of the SHIMMER series will be filmed during the course of that weekend.

Kana made her American professional wrestling debut in late 2011, appearing for both SHIMMER and CHIKARA. Upon her U.S. arrival, Kana refused to even shake the hands of any of the other competitors on the roster, including SHIMMER originals such as Cheerleader Melissa and Sara Del Rey. However, following an intense battle against Canada’s LuFisto, Kana finally deemed a competitor on the roster as having earned her respect, and shook LuFisto’s hand.

Through her friendship with LuFisto, Kana slowly began to accept the other members of the roster, granting post-match handshakes to additional opponents in subsequent matches. The two went on to form a successful tag team in early 2012, competing in a memorable hard hitting match against Hailey Hatred & Kalamity, as well as a bout against the “MSEERIE” duo of MsChif & Christina Von Eerie.

On the singles side of things, Kana has faced many of the staples of the North American women’s wrestling scene in SHIMMER, from LuFisto to Del Rey to Melissa to Mercedes Martinez. She also squared off against fellow globetrotters Mia Yim and Kellie Skater. Having already proven her worth in both the singles and tag team ranks, next month Kana will make her third trip to Berwyn for SHIMMER competition!

Kana joins the following previously announced competitors who will participate in the SHIMMER 49-52 tapings: SHIMMER Champion Sweet Saraya Knight, SHIMMER Tag Team Champions The Canadian Ninjas, Cheerleader Melissa, MsChif, Mercedes Martinez, Allison Danger, Leva Bates, Hiroyo Matsumoto, and Ryo Mizunami. Look for more names to slowly be revealed during the remaining weeks leading up to the events. Over 25 of the top female wrestlers from around the world will be a part of the festivities![/notice]

SHIMMER have also said that the next joshi athlete from Japan will be announced next Monday, September 10. Stay tuned!