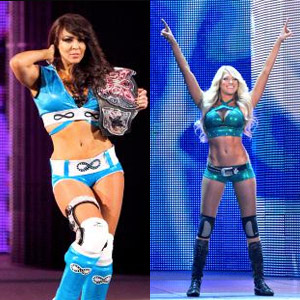 Divas Champion Layla and former Divas Champ Kelly Kelly have revealed that they had no idea they would be ranked on the Maxim Hot 100 list for 2012.

The list, which was revealed yesterday, ranks Kelly at 38 while Layla is at 95.

Speaking to WWE.com, Kelly — a former Maxim covergirl — said: “I am so excited. Honestly I had no idea. I thought maybe I’d end up in the 60s, or if I was lucky, in the 50s. But when I got 38, I thought this is the craziest thing!”

“I beat Kate Upton, who was on the cover of Sports Illustrated. I beat Adriana Lima, who’s in Victoria’s Secret – all of these big names. I couldn’t be happier!”

Meanwhile, Layla added: “I’m in total shock. I’ve only been back about four weeks and I didn’t even know I was nominated. The WWE Universe voted me in!”

“I want to say thank you very much to everybody who voted me in. … I’ve never been in Maxim. So I feel very special. Thank you, guys. It’s awesome. It’s been a great 2012 so far. I couldn’t ask for anything more this year.”

Congratulations to both K2 and Layla.