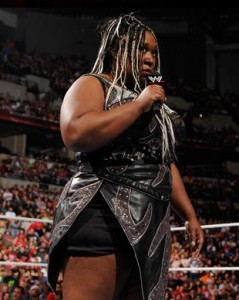 After a week long tease over her announcement, Kharma finally dropped the bombshell live on Monday Night Raw: She’s pregnant.

In a rare moment, WWE allowed Kharma to bow out gracefully giving a very personal speech, as she said it had been her dream to wrestle in WWE, mentioning her initial rejection from WWE’s Jim Ross during Tough Enough 2 over 10 years ago, as well as discussing her body of work in Japan and on the independents.

Following an interruption by the Bella Twins, Kharma let it be known that she’ll be back in one year and hopes the Bella Twins will be still be here, indicating she’s set her sights on them.

Overall, it was a very classy moment from WWE.